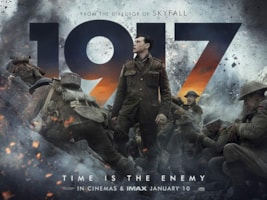 
Two exclusive featurettes on the Sam Mendes film, plus our interview with military consultant Andy Robertshaw.

Sam Mendes, the Oscar®-winning director of Skyfall, Spectre and American Beauty, brings his singular vision to his World War I epic, 1917.

At the height of the First World War, two young British soldiers, Schofield (Captain Fantastic’s George MacKay) and Blake (Game of Thrones’ Dean-Charles Chapman) are given a seemingly impossible mission. In a race against time, they must cross enemy territory and deliver a message that will stop a deadly attack on hundreds of soldiers – Blake’s own brother among them.

Discover more about the making of the film with these two behind-the-scenes featurettes and scroll down for our interview with Andy Robertshaw, the military expert who worked on the film, and is also the guide for our popular WWI Family Tree Academy courses:

‘Nuff said! Interviews then followed these recommendations to see whether Andy was the right person to be the military historian on 1917 and he was sent the script to read through.

Military historian Andy Robertshaw, in addition to his amazing work for Stephen Spielberg on War Horse and Peter Jackson on They Shall Not Grow Old, has also worked with Family Tree.

Andy's two really useful Family Tree Academy video guides are packed with military history advice to help you learn about your WW1 Tommy’s equipment and service records to help you trace and understand his war years.