The atrocities of the Second World War are renowned for the extreme scale and extent of their horrors. But the newly released For

The atrocities of the Second World War are renowned for the extreme scale and extent of their horrors. But the newly released Foreign Office records - now available at The National Archives - take us right down into the micro details of individual people’s experiences at the hands of their Nazi tormentors. Helen Tovey visited Kew to take a look at the documents and uncover the stories within these first-hand accounts.

The records are the newly released Foreign and Commonwealth Office Nazi Persecution Compensation case files, which (from today - 31 March 2016) are publicly accessible in the reading rooms at Kew.

Launched in 1964, the Anglo-German compensation scheme was advertised by the Foreign Office in newspapers of the time and on television - and, by the time of its closure in 1966, four thousand applications had been made for compensation - 1,015 of which were successful.

In light of the vast numbers of people to have suffered incarceration at the hands of the Nazis, a mere 1,015 people does seem very small. The reasons for this were that the scheme did not apply to servicemen who were Prisoners of War; and to qualify you had to be naturalised British before October 1953 (as far as the Anglo-German scheme was concerned); and to have suffered persecution at the hands of the Nazis (not just to have simply ‘suffered’). The definition of ‘persecution’ was precise and stringent.

Reading the files is a humbling experience, and far from being dry and dusty government papers - the tales recorded in these case files reveal first-hand each person’s heart-felt plea to have their story heard. Sometimes it was about the money, but very often it seems more important to the claimant just to have their suffering and legacy of pain acknowledged.

The case files vary in what they contain but typically include correspondence between the claimant and the Foreign Office scheme, and take us through their application - from initial enquiry about how to make a claim, through handwritten accounts of their experiences while imprisoned by the Nazis, and closing letters - detailing the compensation to be paid, or not.

A former serviceman in WW1, by the time of the Second World War TJ Gaudion (case number 950/1373) was a policeman on Guernsey. June 1940 saw the Nazi occupation of the Channel Islands, and despite orders to hand all radio sets in, Thomas Gaudion kept his, to share word from the outside world. This was just one of the tactics that he and 16 fellow policemen on the island used to hinder their Nazi oppressors - until their capture in March 1942.

Thomas Gaudion was then sentenced to 26 months’ imprisonment in a Nazi concentration camp. His wife and daughter were interned separately, and his eldest son died. None of the family members knew of the other’s whereabouts. Mr Gaudion suffered blindness and lifelong nightmares on account of his treatment at the hands of the German Army.

Of the 1,015 successful claims, 238 were to dependants such as Tania Rosandic (950/1096). Her mother was British agent who was captured and shot at Ravensbruck.

‘Mrs Szabo was a resistance worker, and her daughter had a good claim. In view of this letter we can send forms’: these Foreign Office notes refer to a letter sent on Tania’s behalf by Mary D Hamilton, who had heard about the compensation scheme in the newspapers.

Of the 4,000 applications, just a quarter of them were successful, and in the case of those such as Mr Sutton (950/1757) the rejection of his claim must have been deeply wounding. Arrested three weeks after the death of his wife, leaving two young children, Mr Sutton was sentenced to solitary confinement for the next four and a half years, on starvation rations, for his refusal to make armaments that were to be used against his own country.

The Foreign and Commonwealth Office Nazi Persecution Compensation case files are held in FCO/950 at The National Archives and can be viewed in the reading rooms with a reader’s ticket. Some details in the records are redacted and some have not yet been released. Find further details on our news pages. 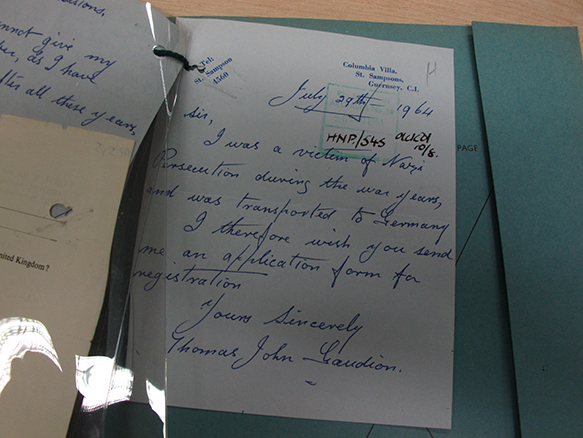 ‘I was a victim of Nazi Persecution during the war years, and was transported to Germany. I therefore wish to send you an application form for registration.’ So began the file for Guernsey policeman Thomas John Gaudion. 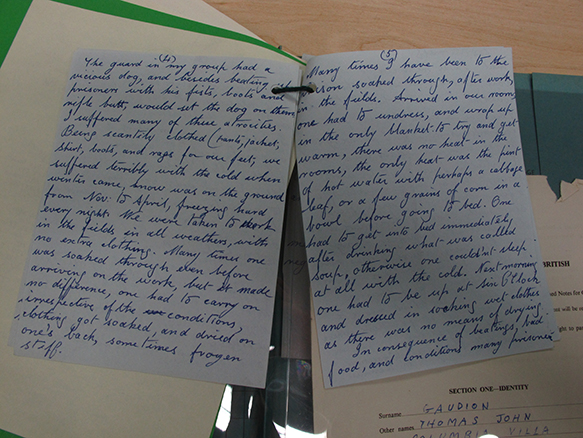 Thomas Gaudion’s handwritten account details his terrible treatment and how his weight fell from 12 stone to just 6. 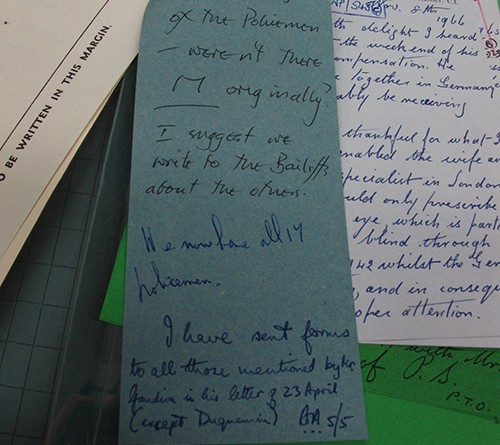 The extraordinary lengths that the compensation scheme team went to, to ensure that possible claimants were tracked down, is revealed in their working notes. See the various handwriting, as different people worked on the case. 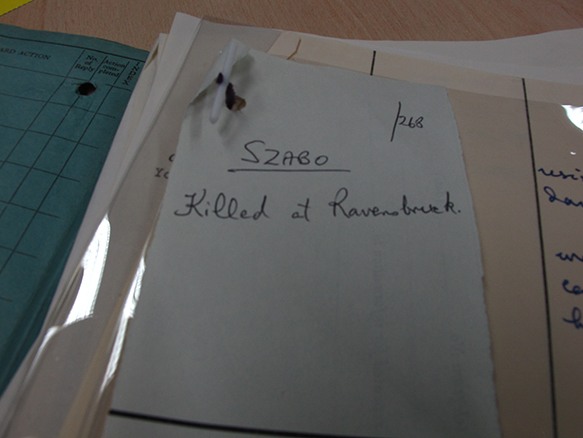 The case of Tania Rosandic was brought on account of her mother – British SEO agent Violette Szabo – being executed on the orders of the Gestapo at Ravensbruck Camp. 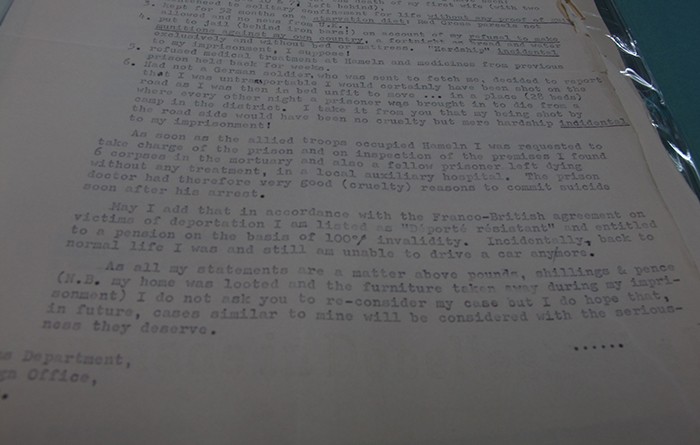 The bitterness and sense of defeat in failed claimant John Sutton’s letter, sent to the Foreign Office having been declined compensation, is palpable: ‘All my statements are a matter above pounds, shillings and pence … I do not ask you to re-consider my case but I do hope that, in future, case similar to mine will be considered with the seriousness they deserve. Yours sincerely John Sutton’.