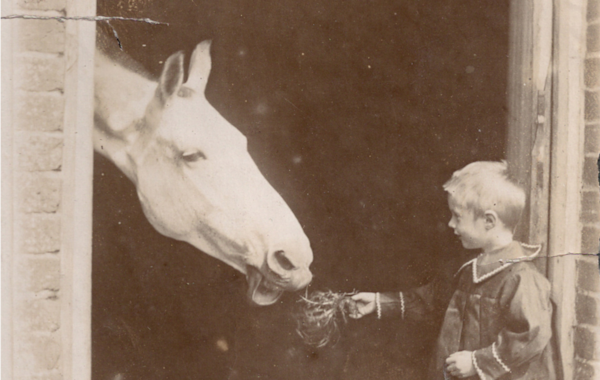 Young Freddie's peaceful youth would come to an end in WW1

Family Tree reader Sarah Reay tells the story of a relative who left the safety of his rural home during the First World War to fight for his country in the skies. This article first appeared in the Christmas 2017 issue of Family Tree. Sarah would like to share her story online too, and hope to make further family history discoveries and connections. We hope you enjoy this poignant account of a farmer's son whose dreams of a peaceful life on the land would be cut short, when he became swept up in the conflict of the Great War. And maybe it will inspire you to write up a story from your own family's history too...

I was born a farmer’s daughter many years ago and on wet winter days my father would come into the house and spend his afternoons working on paperwork in his office. He never enjoyed the paperwork side of farming so he would easily and often be distracted. As I was an inquisitive young girl he would charm me with lovely old photographs from his archive of family history records. One of my favourite photographs was this picture of the little boy (wearing what looked like a frock) feeding hay to the white horse. My father informed me that this was his father’s cousin, Freddie, who had been killed during the Great War. That is all I knew until years later I started to delve into the past, looking for Freddie’s story.

Frederick Charles Butler was born in the summer of 1898. He was the sixth child and the second son born to farmer Joseph Henry Butler and his wife Lilla in the quiet sleepy little village of Bowerchalke, Wiltshire. Freddie (as he became fondly known by his family) was a thin child of average height with light blonde hair and blue eyes.

His childhood was a happy one spent on the Wiltshire downs during the Edwardian era. His parents were devout Wesleyan Methodists (regularly attending the village chapel) and his early Christian beginnings gave him a strong foundation on which to build good values and beliefs. There was work on the farm, although this would have been limited during his early childhood as the household included indoor and outdoor servants. There was a local village school but Master Butler would have gained his early education from the live-in governess.

Freddie enjoyed an idyllic upbringing with his brothers, sisters and visiting cousins. There were long-lost summers savouring endless days of sunshine playing on the farm with the chickens, cattle, pigs and horses. Many hours would be spent exploring the open picturesque, undulating downs – often on horseback and with a camera in hand. The joys of life were simple and good. Although Freddie was still only a teenager, it seems he wanted to stay on the farm, live in the village and continue the family tradition of farming.

However, his peaceful existence was to be broken in 1914 with the outbreak of war. Freddie was 16 and, with his strong sense of duty, he knew he wanted to be part of what most people thought was a righteous war. He was too young to sign up for service at the end of 1914, but after his 17th birthday in July 1915, he left his life working on the farm and volunteered for military service.

We do not know why he chose to sign up with the Royal Flying Corps on 13 August 1915, but we can only assume that those innocent childhood games, pretending to be a bird in the sky, with open arms as wings, swooping and crossing the downs, may simply have inspired him to learn how to fly!

Freddie started his service in 1915 with the Inns of Court Officers Training Corps, which had been newly formed to train boys under military age.

When his basic training was complete, Freddie joined 1 Squadron on 15 November. He was stationed in Bailleul, northern France at the ‘Asylum Aerodrome’, which was one of three airfields in the town where he flew various types of aircraft. Little did he know that a week earlier, his cousin, Army chaplain Rev Herbert Cowl, had been seriously wounded  and was struggling for his life at the Casualty Clearing Station (Clearing Hospital) in the same town.

In June 1916 Freddie moved to a different airfield at Bailleul and joined 7 Squadron operating a BE2, which was a single engine, two-seater biplane used mainly for reconnaissance work.  The BE2 was also used for aerial photography duties, so Freddie’s previous knowledge of cameras may well have been of use.

At the beginning of September 1916 Freddie became poorly with a gastric ulcer and was admitted to the general hospital in Wimereux. Two weeks later he was sent home via Boulogne on the hospital ship HMHS St David. His service records show he was detailed as being ‘unfit’ for general service.

In January 1917, Freddie was sent to 65 Squadron in Wyton, Cambridgeshire, where he became an assistant instructor in gunnery.  By March that year he was detailed as being ‘not quite fit for flying’. At the end of May the squadron moved to Wye before going on to France in the October. However, Freddie did not join them in France and instead was transferred to the RFC School at Reading, moving to No 5 School of Military Aeronautics at Denham.

On 7 January 1918, he moved to No 4 Training Squadron, based at Northolt just outside London. By this point in the war Freddie had been promoted to the rank of 2nd Lieutenant in the RFC.

In February 1918 he was sent to 65 Training Squadron in Dover. He was to be based at Swingate Down, where he was to finish his flying training under the tutelage of Capt RH Hawkins. This involved him learning to fly several different types of aircraft.

By the spring of 1918, after nearly four years of fighting, there were signs that the war was hopefully nearly over. Freddie must have thought that the end was in sight and everyone would be able to return to their former lives.  He was a young farmer at heart and he missed his family.

On 22 April 1918, Freddie wrote home: ‘Today is quite fine but very bumpy, quite unpleasant in the air – I have done two hours today and am going to do another soon – three hours a day is quite enough but I have got to finish my training this month. Things look a good deal better in France – I wish it was all over and we could return home and start farming again.’

Three days later, Freddie flew a Sopwith Camel for the first time – it was the last type of machine he had to learn to fly on his course.

On the morning of 25 April 1918, at about 8.15am, the flying conditions were good and he took his machine into the sky to between 150ft and 200ft. Suddenly, the weather turned and a thick mist began to descend across the Dover downs and coastline. While flying back to the airfield, coming out of the mist, he saw the ground coming towards him at speed, he pulled the machine up so fast that it turned, spun, and landed on its back. An ambulance drove straight to the site of the smashed aeroplane but Freddie had been killed. He had been unaware that his flying machine was so close to the ground. He was 20 years of age.

At an inquest, the jury returned a verdict of accidental death. A second pilot, aged 23, died in a similar but unrelated accident 15 minutes later in the same area of coastline due to the sudden onset of the mist on that fateful day.

The military Court of Enquiry concluded: ‘The Cause of the Accident was in our opinion due to 2/Lieut Butler, on coming out of a dive, misjudging his height from the ground owing to mist, and in pulling the machine out of the dive, he, for some reason unknown, apparently applied rudder, causing the machine to roll into the ground.’

Laid to rest & another shock

Freddie’s body was taken back to his home in Bowerchalke. His family were distraught. The farmer’s young son was buried at the parish church on 1 May 1918. The funeral was conducted by his Army chaplain brother-in-law, the Rev Arthur Stanley Bishop (his eldest sister’s husband). The funeral service was one of the first to break with tradition and black clothing was discarded for brighter attire to celebrate his short and special life.

A few weeks later, on 2 June 1918, Freddie’s cousin Howard Richmond Henry Butler, aged 21, was killed in a flying accident while completing his flying training at Turnberry in Ayrshire. Both cousins lost their lives in the process of completing their training, flying the same type of aeroplane, the Sopwith Camel.

This flying machine had a 130hp rotary engine that produced enormous torque. It was very easy to get into a roll in the direction of the torque and never recover from it, which appears to be what happened to both Freddie and Howard.

Freddie’s other cousin, Rev Herbert Butler Cowl, survived the war and his story is told in the book, The Half-Shilling Curate, A personal account of war & faith 1914-1918 (Helion and Company, 2016). Herbert (my grandfather) had spent much of his childhood playing with his cousins at Rookhaye Farm in Bowerchalke. Herbert became an Army chaplain at the end of 1914 and it is not known if he was at his cousin’s funeral, but the memory of Freddie remained with him forever.

Ninety-nine years on and young Freddie Butler from Bowerchalke is still remembered.

About the blog author

Sarah Reay lives in Northumberland and is the author of The Half-Shilling Curate, A personal account of war & faith 1914-1918. From the thrills of flying a WW1 bi-plane, to visiting the graves of those fallen in battle, Sarah embarked on years of research in locations across England, France and Belgium to become a dedicated family historian. More information on her website at www.halfshillingcurate.com