The Victorian and Edwardian seaside 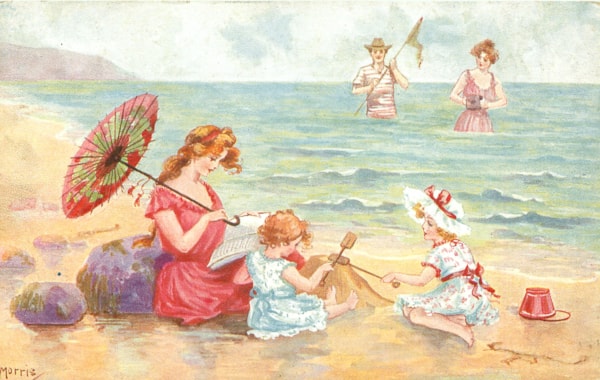 This summer, many of us will be heading to the coast for holidays nearer home – just like the Victorians and Edwardians. Dr Anna Maria Barry takes a trip back in time and explores a golden age of seaside excursions.

In the 19th century, the British seaside experienced an explosion in popularity. From Blackpool to Brighton, Brits flocked to coastal resorts. The rapid expansion of the rail network had made the seaside more accessible, which was convenient as people had more leisure time to fill, particularly after the introduction of bank holidays for workers in 1871.

New hotels sprung up along the coast to cater for the influx of tourists, and sometimes these establishments were very opulent indeed. One of the fanciest was The Metropole Hotel in Brighton, which opened in 1890. Historian Judy Middleton explains that it boasted an Italian garden, a Turkish bath, a Renaissance-style library and an Arabian-themed drawing room. The latter was furnished with opulent rugs and lamps, while the hotel’s own perfumer created an exotic scent to waft around the room.

The Metropole was opened with a grand ceremony: 1,500 guests travelled down from London on a special train and there was a parade involving lions and tigers. Guests who stayed at the hotel included princes, ambassadors and even a maharajah!

While hotels like this were clearly for wealthier visitors, a wide range of accommodation was available for those with more modest budgets – from hotels to boarding houses. Some visitors, particularly from the working classes, sometimes only visited the seaside for a day. Saltburn, for instance, attracted day trippers from Durham while many Londoners visited Southend or resorts along the Kentish coast. A journalist in 1862 described this summer exodus from the metropolis:

No sooner did the sun shine out with promise of continuance than hundreds, thousands, tens of thousands flocked into the South Eastern and Victoria Stations en route to London-super-Mare, which is a name just now equally applicable to several sea-side resorts.

Fun on the beach

There was much to excite younger visitors at the seaside. Though Punch and Judy puppet shows had been popular in Britain since the 18th century, they found new audiences at Victorian coastal resorts where they cemented their reputation as enduring icons of seaside culture. Those who ran these shows were often itinerant performers who travelled from town to town following the crowds. This was seasonal work, and performers would often take other jobs in the winter months, coming to the coast in the summer.

Donkey rides were a key attraction, too. They became popular from the 1880s and inspired much mirth in newspapers and magazines. A cartoon in the comic Ally Sloper’s Half Holiday, for example, shows a large lady mounting a donkey after its owner reassures her that it ‘has been ridden by all the crowned ‘eds of Europe’. The distinguished donkey then bolts, chucking the woman into the sea where she has to be fished out by a coastguard!

Just like today, children were fond of building sandcastles and sometimes this was a competitive activity – in 1898 the Mayor of Weymouth found time to judge his local competition. The adults joined in the fun too. In 1862 a correspondent wrote:

Pleasant it is even to do intensely stupid things – to be upon the beach and pitch pebbles into the sea for half-an-hour, and then help to dig a moat round a sand-castle […] almost feeling as much interest in it as your little son or daughter. […] Pleasant it is to have nothing whatever to do during the whole day, accustomed as you are to hard work.

Bathing, riding and digging works up an appetite, but luckily there were many exciting things for visitors to eat at the seaside. Many of the foods we associate with the coast today – from fish ‘n’ chips and candy floss to ice cream and sticks of rock – could all be found on the Victorian seafront. Cockles and whelks were also available, pickled or fried – a 19th-century fast food!

Dr Anna Maria Barry is a writer, historian and curator. She specialises in Victorian and Edwardian culture.

Text extracted from an in-depth article on the wonders of the Victorian and Edwardian seaside, in the July issue of Family Tree. Get your copy here.