Ask anyone who has ever done family history and they will all tell you the same thing - that at one time or another they have hit a brick wall. Some relative has seemingly disappeared off the records or a line cannot be traced back further than a particular point.

Finding missing members of your family can be particularly tricky if it is not possible to take a trip down to the local archive centre to trawl for yourself. This is often the case if you have ancestors who lived in another country to you, such as India. Millions of people in Britain, America and across the world have ancestors who lived, loved and died in India yet they can find it is tricky to navigate the various collections to find answers to their questions.

Read on for three online resources to help you trace your ancestors in India.

Registers of Employees of the East India Company and the India Office, 1746-1939 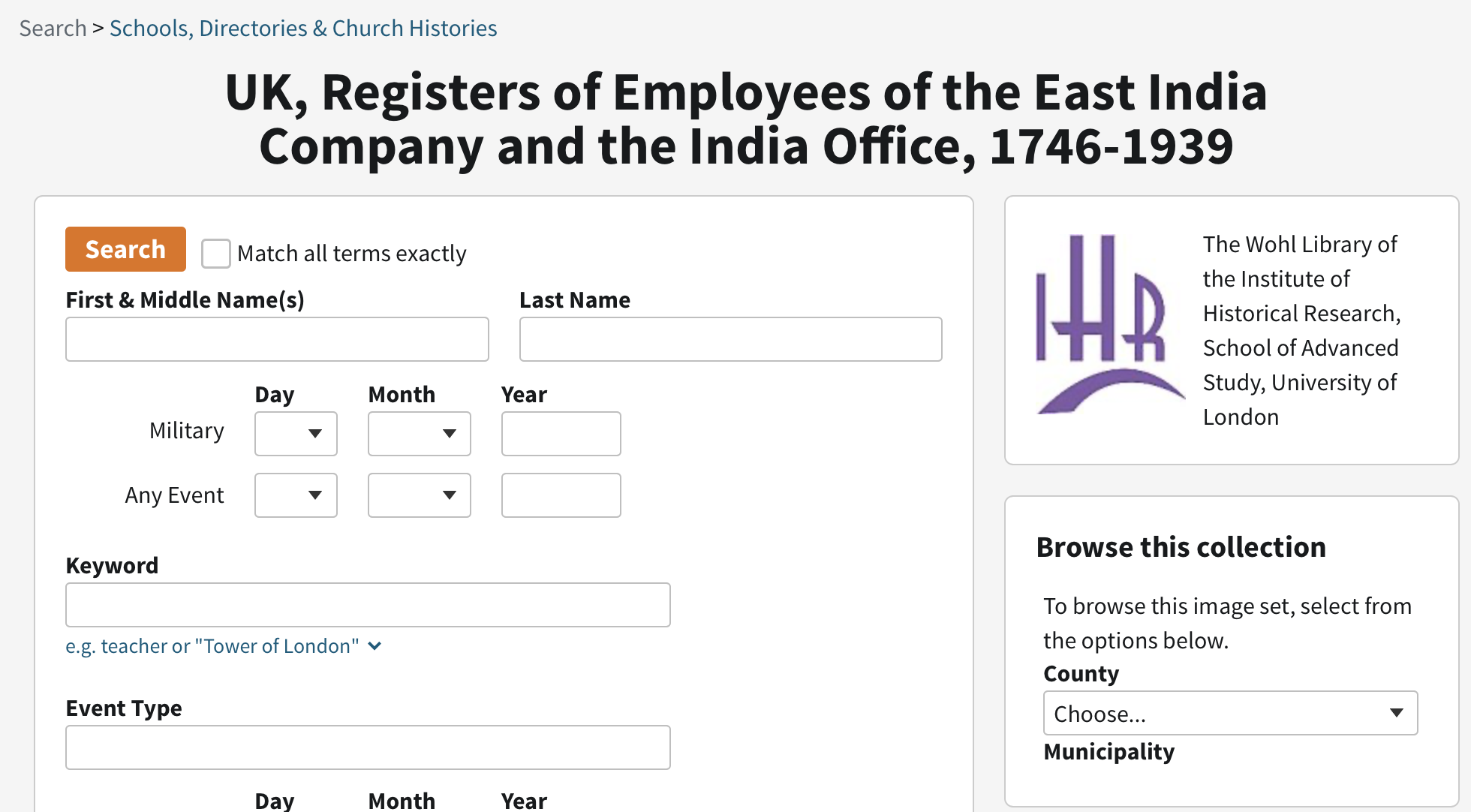 The records can help you easily trace the career of your ancestors, as it helped me trace my great-uncle Major Valentine Chiodetti’s various postings in the Army through the records of the India List Civil and Military contained within the Registers of Employees of the East India Company and the India Office, 1746-1939. As such it can help you easily find out about their career and help you find out where they were serving in the civil service, medical establishment, or the military.

If you can trace your ancestors further back, the records can often become more, rather than less, useful. This is because in the early days of the East India Company, the company liked to keep close records of the births, deaths, and marriages of its employees. This can be invaluable in helping to break down a brick wall in your research as often the East India Company’s record of the event is the only one available online.

FindMyPast has a set of wills from the India Office dating from the 1700s right up to the 1930s. The British India Office Wills & Probate Collection 1749-1947 is therefore an invaluable collection for any family researcher. Whilst it is unfortunate that FindMyPast haven’t provided transcriptions for many of the wills that have spidery handwriting, through deciphering the wills you can help further build up your family tree and also find out the exact amount of money owed and left as well. 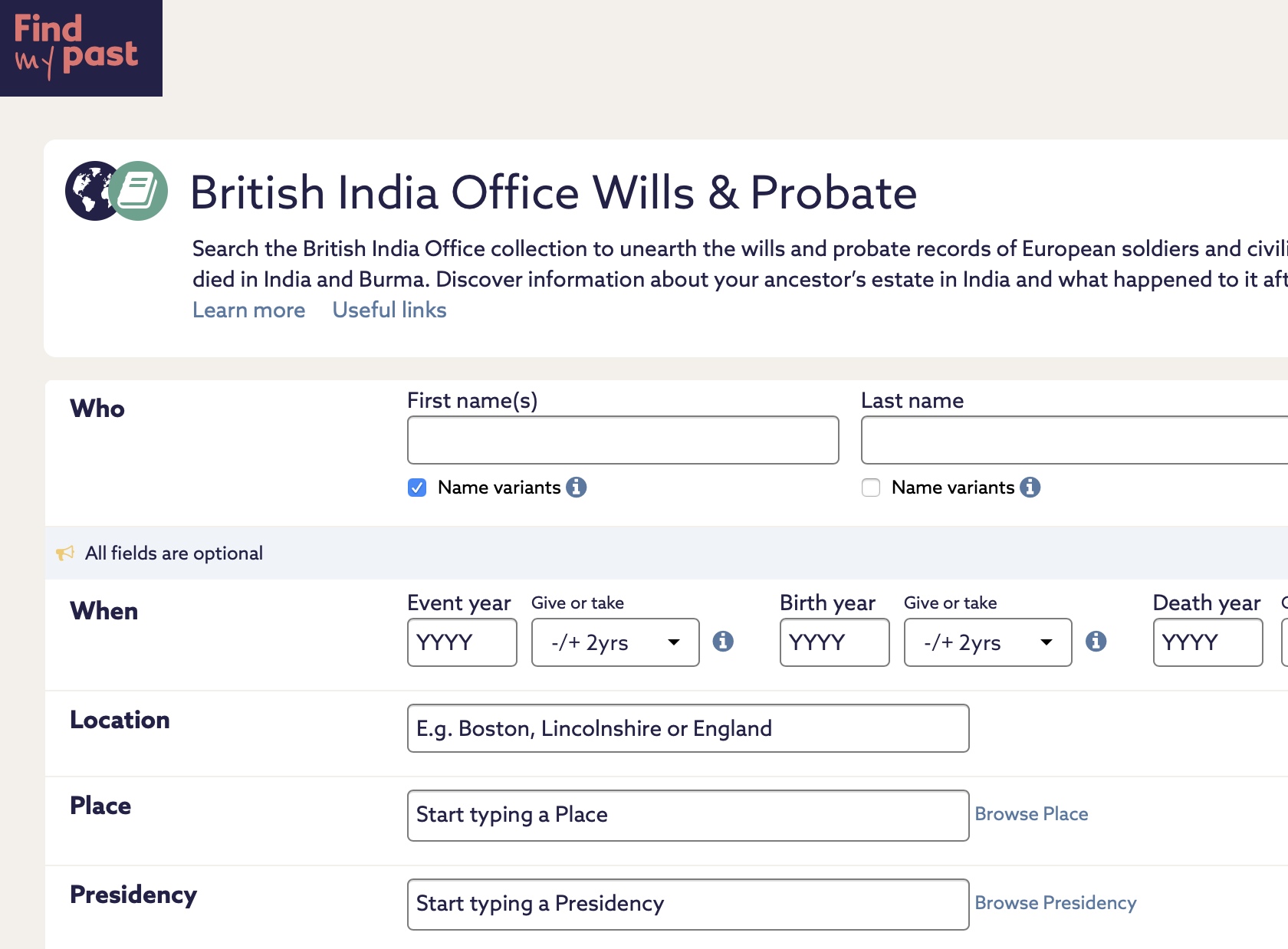 At times, the religious or financial disagreements between family members – such as featured in the 1849 will of my ancestor Julian Boilard which included his less than pleasant assessment of his children’s financial abilities – can be found. Wills are pure research gold for the family researcher.

The Families in British India Society

The Families in British India Society, or FIBIS, is one of the best resources on the internet for those researching their family tree in India. You can search the majority of the FIBIS archive for free without having to pay for the privilege. 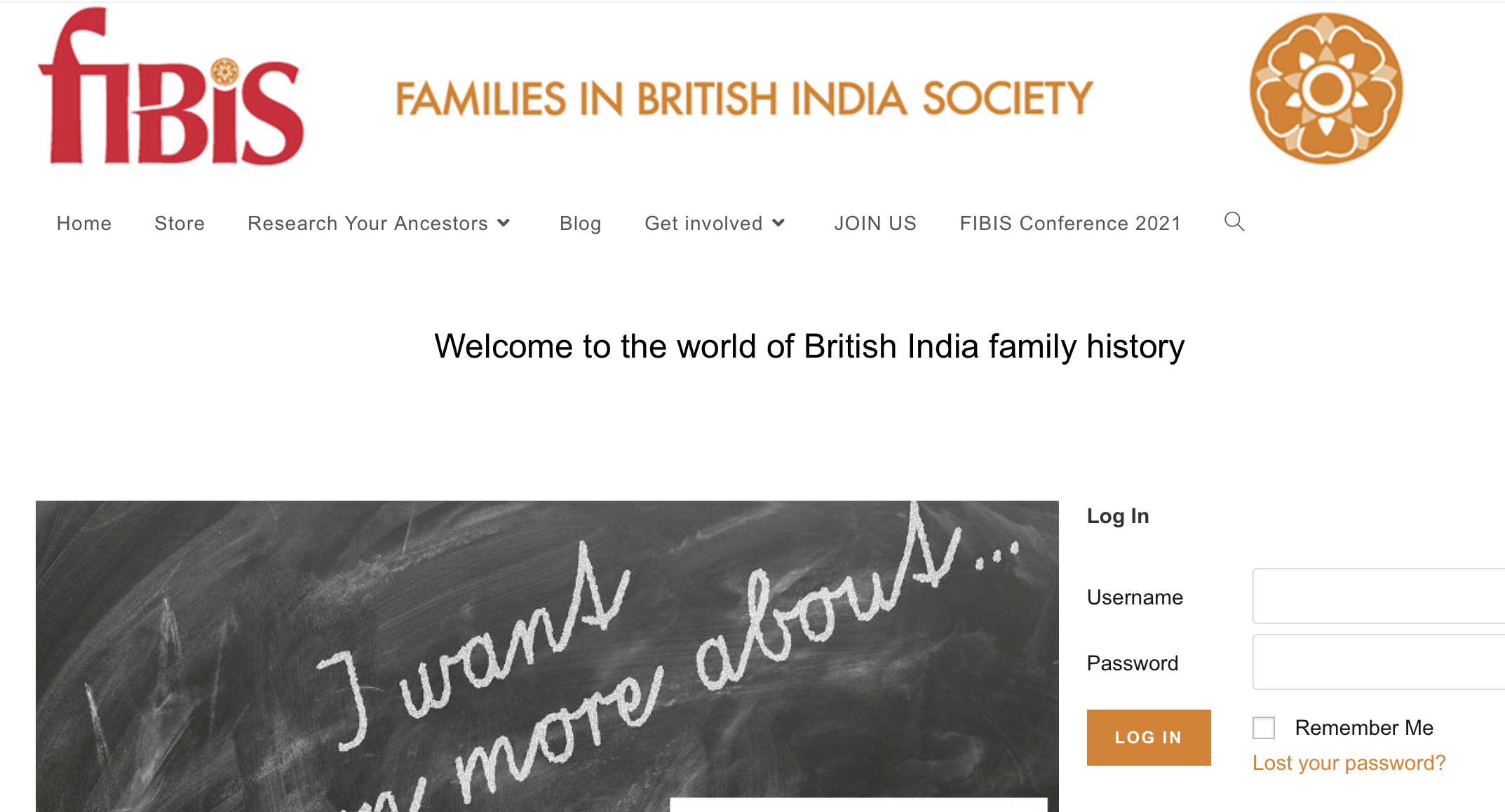 FIBIS’ records contain similar information to FindMyPast and Ancestry, but they also have more niche collections, such as the Agra Fort Census of July 1857, taken during the Indian Mutiny of that year, and the Register of Bombay Army European Soldiers from 1793 to 1839. These types of record sets are particularly unique to India and as such are particularly valuable in helping to pinpoint your ancestor at precise moments, such as during the Indian Mutiny, or when they joined the Army and where.

If you subscribe to FIBIS then you will also be able to access exclusive content such as the highly informative FIBIS forums as well as the FIBIS journal, a bi-yearly publication that features articles about all aspects of family history in India. The publication has a wealth of richly informative articles that may prove useful in unlocking your family in India. Also among the spaces that you can only access as a member of FIBIS are the group discussion section, lists of European Inhabitants of Bengal and Madras in the early 19th century, the John Morgan Photograph collection containing many pictures from the 19th and 20th century unavailable anywhere else and many other exclusive record sets. It is these kind of niche collections that helps set FIBIS apart from other sites.

FIBIS’ more specialist collections are excellent for taking your family tree in India further than you might have thought possible and the ability to search the site for free without having a subscription is a welcome bonus for those starting out on their journey to find their family tree in India.

Will Barber Taylor has recently graduated from the University of Warwick with a degree in History. He is also the host of the British political podcast The Debated Podcast.

Article adapted from an in-depth guide in the September issue of Family Tree magazine. Get your copy here.