"My Dear Mum & Dad, A few lines as I know you are very anxious to hear from me. I am quite well up to now, but am looking forward to the end of this horrible war..." memories of his father's time in the First World War set Roy Hurst OBE on the family history trail to find out exactly what happened.

Evidence of quite a different nature. It was the memory a shrapnel scar on his dad's leg that led to Roy Hurst OBE putting on his family history detective hat to find out more.

It’s the late 1940s, early 1950s. I’m in mum and dad’s bedroom. Dad is changing. Suddenly he points at a large scar on the inside of his thigh and says: ‘That was caused by shrapnel in WW1.’ I remember thinking that the scar was pretty big and wrinkled, but as I had no idea what shrapnel was – should have done, as enough of it fell in our area in WW2 – I just nodded and carried on chatting.

My father, Harry Edward Hurst (1887-1979), son of Richard Hurst (1845-1937), the latter born in Walton, Aylesbury, joined the 3rd Battalion King’s Royal Rifle Corps in February 1906 as a bandsman (trombone and occasional conductor). He served in Crete, Malta and India, taking part in the great Durbar of 1911, when George V and Queen Mary, recently crowned, went to India as Emperor and Empress. The film of the occasion can be seen on the web. Dad left the Army in 1913; I have his discharge papers. He was called up in the first week of WW1 and was wounded twice, serving this time in the 1st and 9th Battalions, both as a bandsman, entertaining the troops and, among other things, as a stretcher bearer. I still have the bullet that struck him the second time.

Like so many people, I became interested in family history long after my father and mother had died. No one in the family was able to add to the ‘shrapnel’ story, so that appeared to be the end of the search. How frustrating! To make things worse, my father’s WW1 records were destroyed in WW2.

Then, some 15 to 20 years ago, I was on the phone to my sister Barbara, when she suddenly said: ‘I was looking at some of the books in the garage when a thin, black wallet fell out. When I opened it, there was a newspaper article about dad being wounded in the Great War.’ A truly jaw-dropping moment.

I dashed over to Hayes and, heart thumping, read the article. It was headed ‘Old Hillingdon Bandsman Injured’; someone had added in ink ‘Oct 1914’. It read as follows:

Bandsman Hurst, son of Mr and Mrs Hurst of Hayes End-road, is lying in Lincoln Hospital suffering from wounds in the thigh caused by shrapnel. Mr Hurst served in the King’s Royal Rifle Corps, enrolling nearly eight years ago. He had previously seen service in India, returning after six years’ service there last year [not true about the time spent in India]. On his return home, he became an employee of the Southall Gas Company. He left England with the first Expeditionary Force. He fought through the battle of Mons but was unfortunate enough to get injured in the Battle of the Aisne. His wounds, however, are not serious [not true: certainly serious, if they brought him back to Blighty, but not life-threatening]. Mr Hurst is well-known amongst the bandsmen of the district. For several years he served with the Hillingdon Church Temperance [Prize Brass] Band, and was successful in obtaining medals for his playing on the trombone at the band contest at Yiewsley two years in succession [1904 and 1905; I still have these and other medals]. A letter was received from him on Monday morning, which he had written whilst in the trenches, saying that he was all right. On the evening of the receipt of the letter at Hayes he had landed in Southampton.

The letter, addressed to my gran, was actually a scrap of paper folded over into a V-shape. It reads:

My Dear Mum & Dad, A few lines as I know you are very anxious to hear from me. I am quite well up to now, but am looking forward to the end of this horrible war. Please send me some writing materials. My address is the same as before. Love to all Harry. The letter was passed by Censor No 66, the (first) Battle of the Aisne, a river in France, started mid-September 1914 and ended on the twenty-eighth. 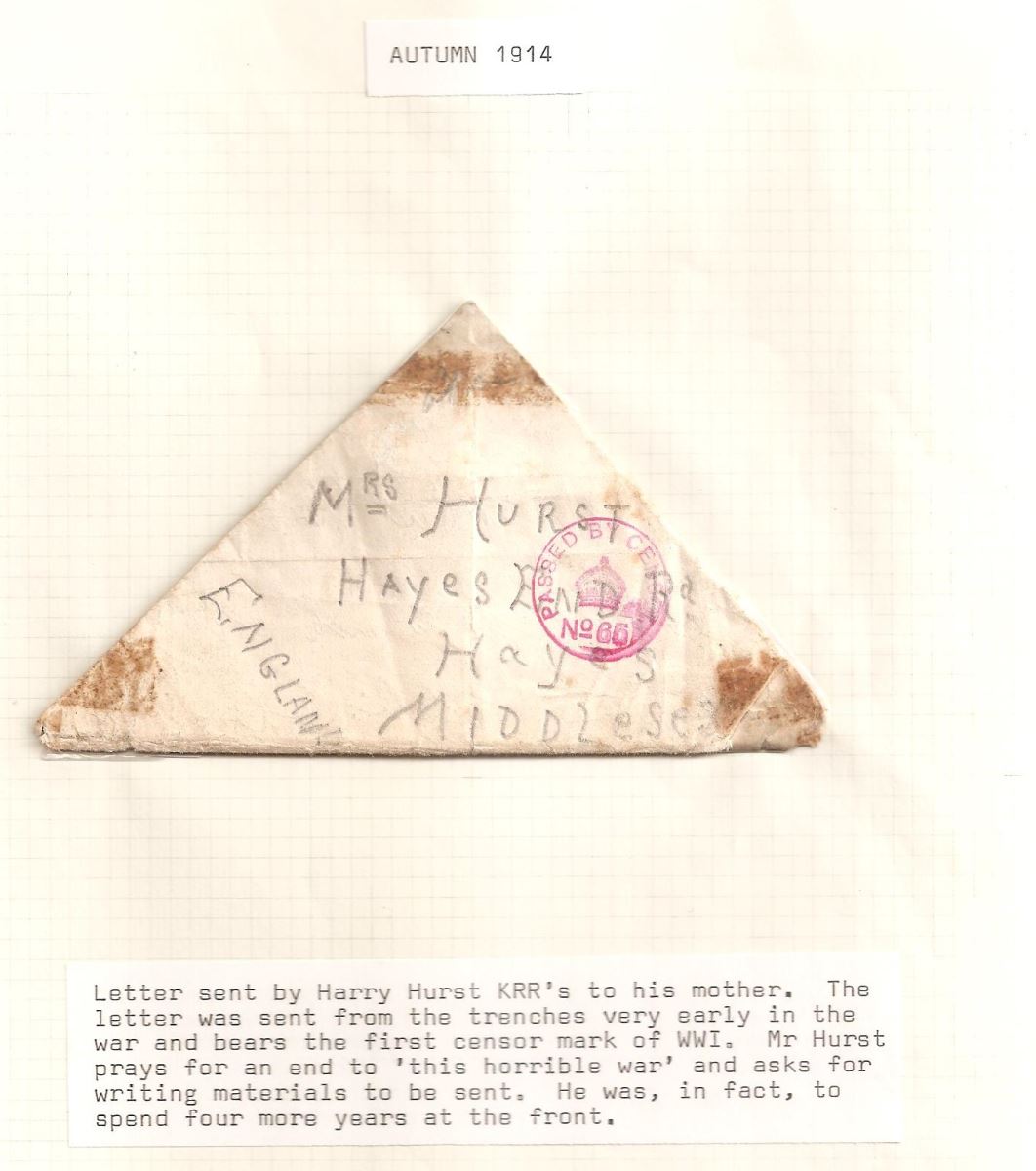 My next task was to go to The National Archives, Kew, to see whether the War Diaries of the 1st Battalion KRRC could shed any further light. These are the clues I found: On 14/9 ‘a few men were hit by shrapnel’; 29/9 ‘Everything was quiet till about 3 p.m. when enemy horse gun opened up on trenches. 3 Riflemen killed and 11 wounded by third shell’; Total casualties 14th-21st 5 officers wounded, 27 Other Ranks killed, 136 wounded, 18 missing. Incidentally, a battalion consisted of about 1,000 men, of whom 700/750 would be ‘fighting men’, the rest being cooks, bandsmen, stretcher bearers, messengers, clerks etc. etc..

And that was the end of the story, or so I thought.

I don’t remember how I found this out, but it transpired that the Imperial War Museum holds a large number of recordings made by former members of the military. I dropped them a line and enquired as to whether they had any recordings made by men of the 1st Battalion KRRC in World War 1. To my great joy – not to say ‘excitement’ – the answer came back in the positive. A Sergeant Painter had made a recording covering the whole period 1914-1918. That was the good news. The bad news was that he had been one of 500 members of the battalion captured by the Germans in November 1914. Nevertheless, it was fascinating listening to him talking about the first four months of the war.

The final piece of the jigsaw fell into place just a few months ago. I was fiddling with my computer and suddenly decided to type in ‘British Casualties WW1’. I realised, of course, that the chance of finding anything relevant to my research was remote. One site was entitled ‘Forces War Records’, a pay-to-see site, but one which allowed an initial free search to ascertain whether one’s ancestor was in the records. I typed in my father’s surname and up came a list of Hursts.

I ran my eye down the list and almost fell off my chair when I saw my father’s Army number. I clicked on his name and was given a few basic, already-known facts. To get further data I would have to cough up £8+, which I duly did. What I saw on the screen made me take a sharp intake of breath. This is what I read: Hurst – 28 – Index No of Admission 544 – Rifleman – Service No. 6854 – 8 yrs service – shrapnel, thigh left – Date of admission for original ailment 3/10/14 – Date transferred to other hospitals 4/10/14 – No. of days under treatment 2 – a note written in the Observation Column read ‘To St Patrick’ – KRRC – 1st Battalion B Co(mpany) [a ‘company’ was circa 250 men]– Archive Reference MH 106/874 (found at The National Archives).

Several things stood out for me. First, the fact that dad had served in ‘B’ company. This meant that when perusing the Battalion War Diaries I could occasionally pinpoint precisely which actions my father had been involved in. I knew that in order to get to the Base Hospital, the final destination before Blighty, he would have passed through the Regimental Aid Post – Advanced Dressing Station – Casualty Clearing Station. Which left one question: what was ‘St Patrick’? The obvious answer was ‘a hospital’, but a look on the net revealed nothing. I was about to give up, when my eye caught the following: ‘My grandfather was wounded in WW1 and brought home on the hospital ship SS St Patrick’.

Bingo! It took me a mere five minutes to uncover the salient points: Built by John Brown on the Clyde, launched 1906; a 350-foot steam turbine passenger vessel requisitioned as HMHS (hospital ship), destroyed by fire in 1929. I also found several photographs.

So there you have it. After a 70-year wait, the story is more or less complete. 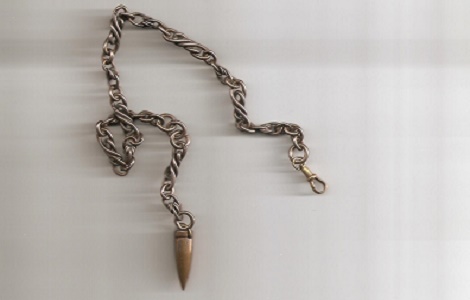 But what about the second wound involving the bullet that I have on the end of a watch chain (a little girl once asked me if the chain was attached to the bullet when it hit my dad!)? I can’t be certain, but the following diary entry of the 18th February 1915 might provide the answer: ‘We had one rifleman wounded by a stray bullet after dark near Windy Corner and also one of the stretcher bearers who was carrying this man down from our dressing station to the Field hospital was hit by another.’ A stretcher bearer would rarely have been deliberately targeted, so a stray bullet makes good sense. This might also explain why the bullet I have looks as though it has never been fired.

Finally, for anyone whose ancestor was a casualty in WW1, the book to read is Wounded: from Battlefield to Blighty 1914-1918 by Emily Mayhew, first published by The Bodley Head, London, 2013, ISBN 9781847922618. If your ancestor was a bandsman, then the following might be of interest: Bullets and Bandsmen. The story of a bandsman on the Western Front by Daphne Jones, published 1992 by Owl Press, ISBN 0 95159173 8.

Like many people, Roy's interest in family history began after his parents, aunts and uncles had virtually all died. The bug was triggered when a friend pointed out that someone in Family Tree Magazine was looking for Hursts from Buckinghamshire and Oxfordshire.

Over the past 25 years or so, he's had several Hurst Picnics, traced the family back to circa 1510, written dozens of articles for a variety of magazines, found a mass of relevant newspaper articles, researched all the Bucks, Oxon and Northants Hursts in the censuses for 1841-1911 (including those women whose maiden name was Hurst),  had his DNA tested (found a Viking link), given a number of talks, discovered that his branch of the family is one of the longest-lived in Britain.