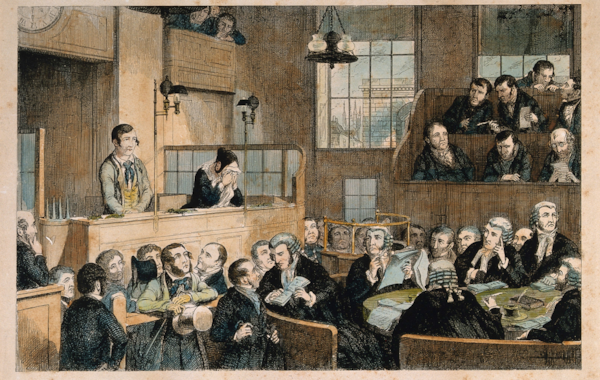 A rich source for family history can be the records of the courts that presided over our ancestors, whether they be criminal, civil or church. Here are our 3 top choices of free websites providing court records at no cost, to help get you started in exploring this new avenue of research.

A rich source for family history can be the records of the courts that presided over us, but this can be a complicated area to plunder, not least because there were historically so many different types of court, covering a variety of jurisdictions and matters. These range from ecclesiastical bodies overseeing the morality of their congregations, to state courts keeping our ancestors on the straight and narrow for all matters civil and criminal.

The legal systems across Britain and Ireland also differed from country to country, but, to generalise, the state courts of England, Wales and Ireland were similar in nature, with all countries utilising English law. In Scotland, there were substantial differences, with cases heard through Scots law, even after the union in 1707 which formed ‘Britain’.

In the September 2018 issue of Family Tree, genealogist Chris Paton provides a hugely useful introduction to court records and how to find them. It is just perfect for helping beginner family history researchers get to grips with more advanced records.

Here we pick out 3 free websites, covering various court records from England, Scotland and Wales, from Chris's expert selection to get you started:

1 The Proceedings of the Old Bailey Online

The Proceedings of the Old Bailey website has made documents freely available from almost 200,000 trials carried out at the London court from 1674-1913, as well as an Ordinary of Newgate’s Accounts, which provide information on the lives and deaths of convicts at Tyburn from 1692-1772.

2 The National Library of Wales’ Crime and Punishment database

The National Library of Wales’ Crime and Punishment database features records extracted from the gaol files of the Court of Great Sessions in Wales from 1730-1830.

The Scottish legal system is substantially different to that of the rest of the United Kingdom. Prior to the mid-18th century, lesser criminal matters were heard at various local Sheriff Courts by Sheriff-deputes, whose roles were hereditary, inheriting their jobs from their fathers following their deaths. Sheriff Court reports published in The Scottish Law Review and Reports of Cases in the Sheriff Courts of Scotland (1885) and available to read for free on the Internet Archive – simply search for ‘Scottish courts’. They are also freely available on Google Books.

Other articles you might find of interest in our Useful genealogy websites section: