Karen Clare gives a glimpse behind the doors of the newly-transformed IWM London ahead of its reopening to the public.

Karen Clare gives a glimpse behind the doors of the newly-transformed IWM London ahead of its reopening to the public. 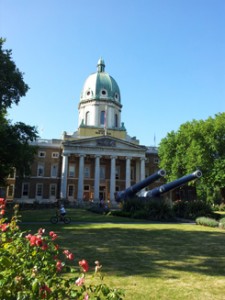 The Imperial War Museums’ (IWM) flagship London branch in Southwark reopens tomorrow (Saturday 19 July), a year after closing for a hugely impressive £40m redevelopment in time for the centenary of the First World War.

Officially launched by the Duke of Cambridge and Prime Minister David Cameron yesterday, it is a remarkable and poignant memorial to our ancestors who lived through and died in the Great War.

This major revamp has included the building’s Atrium which, redesigned by Foster + Partners, houses nine of the IWM’s most iconic large objects, including a Spitfire and V-1 rocket. It is a breath-taking introduction to the museum’s treasures. Each object in ‘Witnesses to War’ tells a story in this bright, white new space, but it is the museum’s ground-breaking First World War Galleries that really take your breath away. 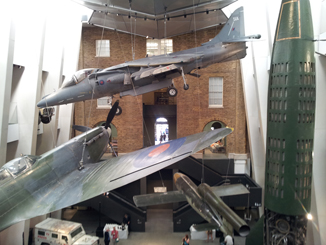 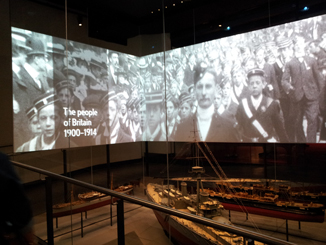 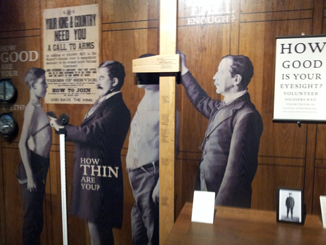 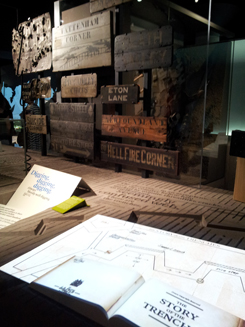 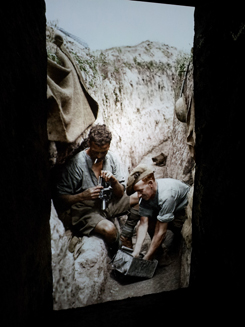 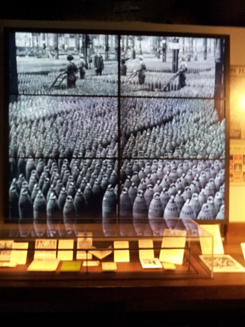 Women at work in a munitions factory. 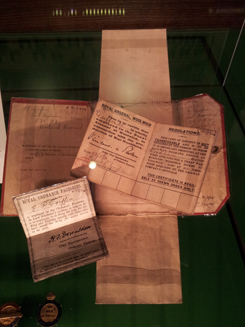 This multi-media sensory experience, designed by Casson Mann Design, begins with a cinematic exhibit telling us what life was like in Britain between 1900 and 1914. Be prepared for the unknown as you venture deeper into the 14 themed, dark galleries, which are arranged in chronological order so we can experience the war as our ancestors did, completely unaware of what was going to happen next.

In the ‘Shock’ gallery you can almost feel the shrapnel shoot past your ears, the cries of men shown being cut down unexpectedly in their prime by rapid gun fire from a French 75mm field gun positioned nearby. The British Army was ill-prepared for the horrific casualties caused by modern weaponry. Just four months after Britain went to war in August 1914, a million men lay dead.

The displays use the latest technology to create interactive displays and many will leave you with your heart in your mouth. But it is the poignant artefacts – more than 1,300 of them, some never before seen in public – that tell the individual stories of war through the voices of our forebears, making the personal public. Alongside the weapons and uniforms are trench signs, letters, diaries, photographs, documents, posters, trinkets and more, each with a tale to tell. Testimony after testimony brings their stories to light and life, allowing us to see the war through our ancestors’ eyes without the benefit of hindsight, both at home and on the battlefields of the world.

The galleries are dark, imposing, threatening. War feels very close. Lucky for us, we didn’t have to experience it, but this is likely to be the closest we can get to hearing our relatives’ stories in this rolling narrative.

At the end of the galleries, this war is over but the world will never be the same again. Eighty-eight per cent of those who fought came home but, as we family historians know, many never talked about their war. Thus few of their stories have been passed down our families. But the First World War Galleries give us the opportunity to hear the voices, gaining some understanding to pass to the next generation. It’s a fitting memorial to all those who lived through those darkest of times.

Read more about the transformation of IWM London in the August (out now) and September issues of Family Tree (on sale 6 August).

Find Family Tree in WH Smiths, leading supermarkets and all good newsagents, or you can download the latest issue as a digital edition right now – visit www.pocketmags.com, the App Store, Google Play or Amazon Appstore. Single issues, back issues and subscriptions are available for PC, Mac, eReaders, smartphones and tablets. A free sample is also available for all devices.