The Armada Portrait after conservation

An iconic Armada Portrait of Elizabeth I is returning to the Queen’s House at Greenwich after extensive conservation treatment.

An iconic Armada Portrait of Elizabeth I is returning to the Queen’s House at Greenwich after extensive conservation treatment.

The Armada Portrait is one of the earliest examples of a large-scale work in oils by any English painter, with a connection to the two most important native-born artists of the age, George Gower and Nicholas Hilliard.

Some 425 years after it was painted in the early 1590s – and as the result of a major public appeal that raised £10.3 million, including £7.3 million from the Heritage Lottery Fund (HLF) – the Armada Portrait finally entered public ownership in 2016, in the care of Royal Museums Greenwich. The HLF grant followed on from the public appeal mounted in association with Art Fund, which attracted 8,000 individual donations amounting to £1.5 million, as well as other major grants.

After brief initial display in the Queen’s House last autumn, the painting has now undergone over six months of complex and comprehensive conservation. This painstaking work was expertly undertaken by Elizabeth Hamilton-Eddy, who is Senior Paintings Conservator at Royal Museums Greenwich, with over  40 years’ experience in the field including on panel works of this kind.  The portrait went back on display in the House on 13 October 2017.

Stephen Deuchar, Director, Art Fund, said: ‘Thanks to the several thousand people who donated to our appeal to acquire this iconic portrait, we are today celebrating its new display in the galleries of the Queen’s House. Its painstaking restoration in the hands of the expert team at Royal Museums Greenwich has been transformative, breathing new life into its rich iconography and meaning’. 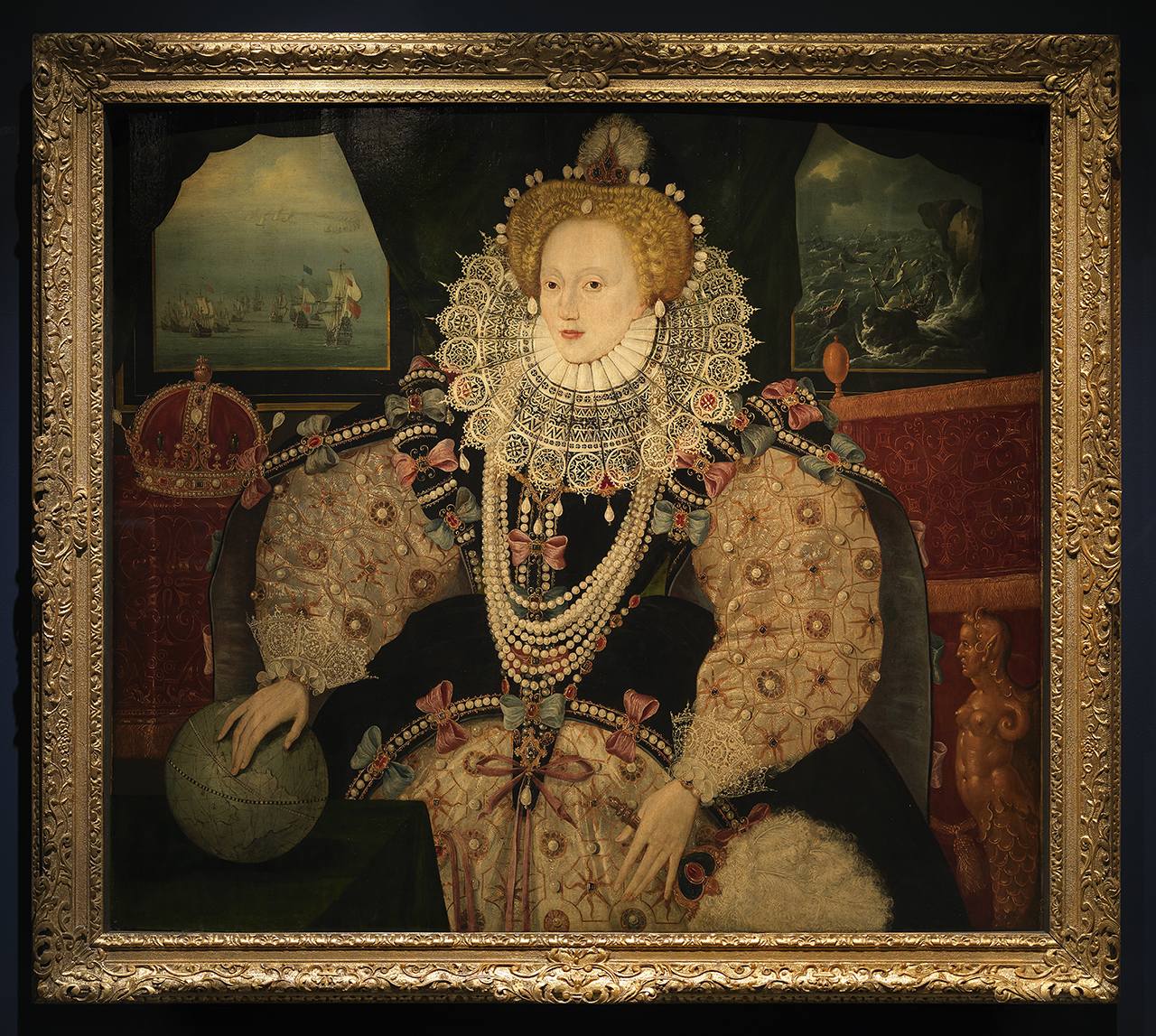 Background to the Armada Portrait

The Armada Portrait commemorates the most famous conflict of Elizabeth’s reign (1558–1603), the Spanish Armada’s failed attempt to invade England in August 1588. It is also a work of which the national significance transcends that specific event, given that scholars have sometimes called it a definitive representation of the English Renaissance, encapsulating the creativity, ideals and ambitions of the whole Elizabethan era, often styled ‘The Golden Age’. As such it regularly appears in textbooks and teaching curricula for at least three separate but connected disciplines: history, art history and English literature.

Since at least the early 20th century the portrait has also inspired and informed countless portrayals of Elizabeth I on stage, in film and television, and been instrumental in making her one of the most recognisable historical figures for audiences today.

The long conservation treatment removed several layers of old varnish and retouchings, more fully revealing the painting’s intricate detail and vibrant colours. Specialist technical analysis has also provided important new information about the two background seascapes framing the figure of the Queen, and confirmed that they were repainted in the early 18th century.

This has included paint analysis, new X-ray imaging and Macro XRF scanning - the last by the Italian-based MOLAB team (part of IPERION CH – Integrated Project for the European Research Infrastructure on Cultural Heritage) and funded by the European Commission. In particular, the detection of Prussian blue in some minor repairs and in the two reworked scenes, demonstrates that they are likely to date to about 1710.

Both are painted over earlier versions, showing 16th-century ship types: these can still be seen in the only other complete version of the painting (by another unidentified artist) in the Bedford Collection at Woburn Abbey.