New research has revealed the names at risk of extinction in the UK and those that are growing fastest in popularity, analysing over 1.5million names across a period of 10 years. Is your name on the list?

The analysis, conducted by name label manufacturer My Nametags, of a database of over 1.5 million names, found that the use of the names Gemma and Kieran has declined by more than 65 percent over the last decade, with the names at risk of dying out completely if the trend continues.

Most endangered names in the UK

There were just 36 uses of the name Gemma in 2020, and none in 2021, whilst there have been just four Kierans listed so far this year. 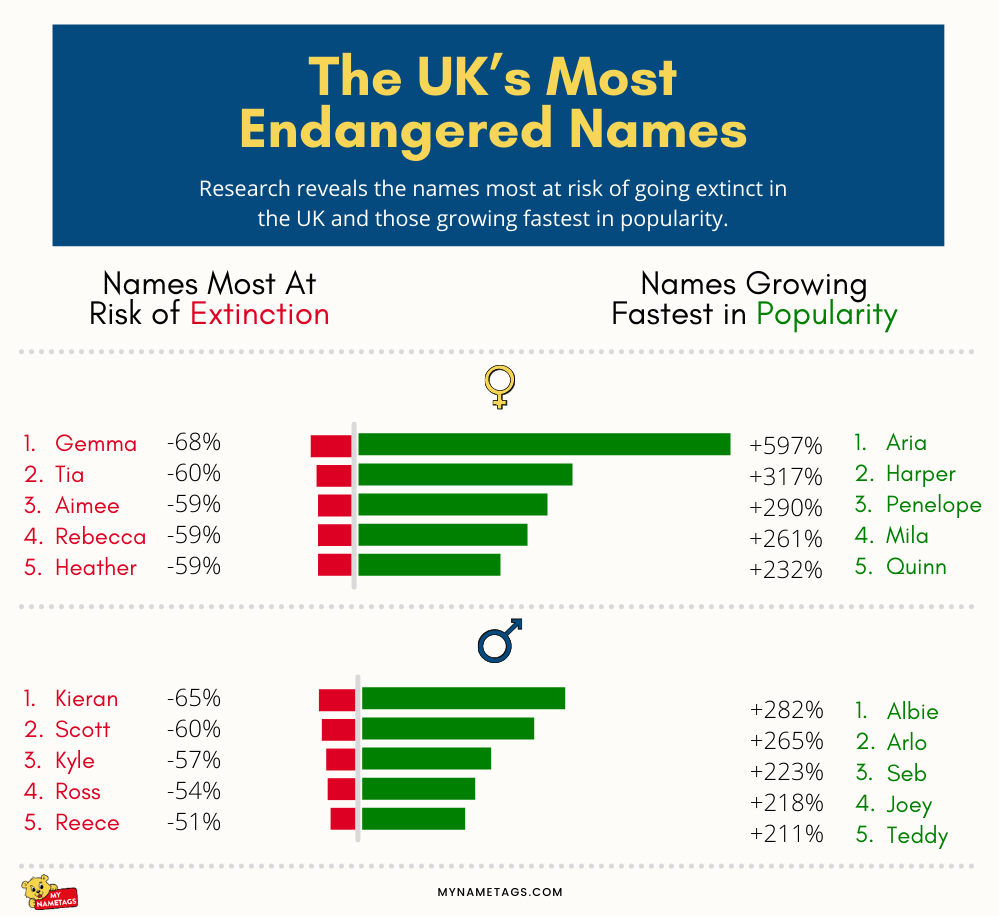 Fastest growing names in the UK

These names have been replaced by new, more unusual names, with analysis showing that many modern parents are being inspired by popular culture. Uses of the name Aria (+597 percent) inspired by the character Arya Stark from the best-selling book series and HBO hit-show, Game of Thrones, have skyrocketed in recent years. Emilia, after actress Emilia Clarke, who is best known for her role in the fantasy drama, also makes the list of fastest growing names after seeing an increase of more than 90 percent in the past 10 years.

QUICK LINK: These rare British surnames could soon be extinct...

The use of nicknames as given names is another trend that is continuing to grow. Albie (+282 percent), Bertie (+143 percent), Teddy (+211 percent), Belle (+95 percent), and Ronnie (+81 percent) all make the top 50 fastest growing names ahead of their traditional counterparts Albert, Theodore, Isabel, and Ronald. This trend was seen first-hand when the Duke and Duchess of Sussex chose to name their son Archie in 2019, in place of the more traditional Archibald.

However, despite the growth of new and shortened names, the research also shows a continued appetite for more nostalgic, ‘old-fashioned’ names. Mabel (+84 percent), Flora (+91 percent), Florence (+84 percent), Rupert (+205 percent), and Arthur (+104 percent) are amongst the names that have experienced significant growth during the past 10 years and join the list of the top 50 fastest growing names.