Actually seeing pictures of our ancestors, especially once we get back into the 19th century, really is something special. In eve

Actually seeing pictures of our ancestors, especially once we get back into the 19th century, really is something special. In every issue of Family Tree photo-dating and costume expert Jayne Shrimpton helps readers to unlock the clues hidden in these treasured family photos. Here we're going to share additional pictures, and hope that you enjoy Jayne's insightful answers. 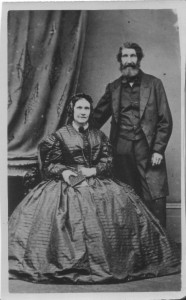 Q: I have an old album that has always been in the family: it contains around 60 photos but none are identified. The photographic studios are generally in Liverpool or Northwich, Cheshire, which ties in with where my Victorian ancestors lived. I do recognise two of the photos as representing my g-g-g’mother Elizabeth Broad Roberts (1815-1894), who was married to Henry Sutherst (1817-1884). They lived most of their life in Liverpool and had 8 children including my great grandfather, Walter Sutherst who, in 1870, married Isabella Hayes. They in turn had 7 children, again mostly born in Liverpool, although my grandmother Harriet Gertrude (Daisy) Sutherst, the youngest, was born in Northwich in 1884.

A: We featured two of your photographs in FT April issue magazine and here we look at two more, although when researchers are fortunate to have inherited a complete Victorian album, it is most useful to consider the entire contents as a whole, as well as the separate images, because often one photograph in the album will turn out to have a significant bearing on another.

One of these two photographs you have identified as Elizabeth Broad Roberts and Henry Sutherst and I see no reason to doubt this identification. The photograph is an early carte de visite dating from the 1860s. Your 2 x great grandparents are both well-dressed here, Elizabeth wearing a coloured silk gown with the fitted bodice and full crinoline skirt typical of the early-mid 1860s, as well as the narrow cap or band that signified a married woman in the mid-Victorian era. Henry wears a formal knee-length frock coat, with a waistcoat and the loose-fitting trousers of this period, presenting a dignified appearance. Since they are middle-aged and may not be dressed in the very latest styles, you should perhaps consider a date range of c.1861-68.

The second photo appears to me to portray the same lady as we saw above – Elizabeth Broad Roberts. Facially she looks very similar, but this photograph is slightly later in date, judging from her appearance. Here she wears a layered silk costume comprising a thigh-length jacket-bodice or short overdress over a matching skirt. The layered arrangement and fullness at the back, suggesting a modest bustle projection, would usually place this image between the years 1869-75. Perhaps it was taken to mark your 2 x great grandmother’s landmark 60th birthday in 1875.

Q: I was sent these two photos recently from Canada. My contact’s mother had written on the back that they were her grandparents, George (1868-1938) and Annie (1869-1933). They look to be taken in a studio: please could you estimate the time frame.

A: These are definitely professional photographs and they were almost certainly intended as a matching pair. The studio setting is the same, as we see from the identical painted back cloths, the couple were probably photographed together on the same day and, although pictured separately, they face one another, suggesting that their portraits are companion pictures. I see no reason to doubt the identification of these family members as their ages look right for Annie’s and George’s dates. Middle-aged here, they have decided to be photographed wearing fashionable winter outdoor wear – good quality heavyweight coats and smart, very stylish hats.

Female dress is always easier to date closely than men’s wear. Annie’s striking ostrich feather-trimmed hat suggests a date range of broadly c.1909-15, which will apply to both photographs. Her plush fur collar would have still been considered something of a status symbol at that date. George’s coat - probably the smart Chesterfield – is worn open over his lounge suit. His felt hat with a dented crown, made in the fedora or trilby style, would have been a semi-casual, fashionable choice at that date. 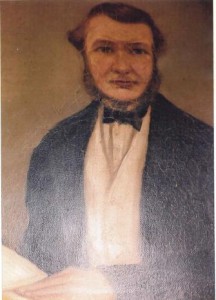 Q: Here is a portrait of an ancestor James Saunders, 1837-1874. Please could you provide any background information such as his status, age, dress or occupation? On the 1841 Census as a child he was living in Binstead and later in Hale, near Farnham.

A: This appears to be an oil painting. It is not particularly accomplished as an artwork, so it may have been painted by an amateur artist known to James or possibly by a ‘provincial’ professional artist. Usually it was the middling or upper classes who could afford to commission hand-crafted portraits or who mixed with artists, so it seems that your ancestor was at least moderately successful in business. He wears regular fashionable clothing dress here, which unfortunately tells us nothing of his occupation. His early style of beard, frock coat and deep V-fronted waistcoat suggest a date between the late-1850s and mid-1860s, when James was aged in his twenties.