Old photos under the microscope Old photos under the microscope

In every issue of Family Tree, photo-dating expert Jayne Shrimpton casts her knowledgeable eye over pictures that readers have sent in, asking for advice. Unfortunately we just can't fit them all into Family Tree, so please find two Family Tree readers’ photos and Jayne’s insightful answers below. Maybe these clues will help you date family pictures of your own, too.

Q: I hope you can help me with the enclosed photographs. I know for certain that the black and white photograph represents my great-grandmother, Agnes Waldie, born in 1846. The orange image is a copy of a photograph on wood. Do you think this could represent the same woman, or possibly her mother, Mary Chalmers born in 1825 and perhaps holding a grand-child? I would be grateful for your opinion. 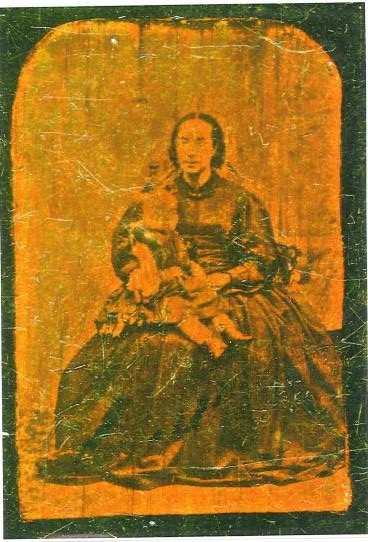 Photograph 1 - This photograph on wood is interesting: occasionally photographs may occur on unusual support materials. The lady is wearing the fashions of the early-mid 1860s, as evidenced by her fitted bodice, closed ‘bishop’ sleeves, full crinoline skirt and hairstyle, the hair centrally-parted and drawn down into a low chignon behind her neck. I’m afraid her face is not very clear in this scan and so it is hard to judge her age accurately and to compare her facial features with those of Agnes Waldie in the other photograph. I’m not sure whether she can be your great-grandmother, who was only aged in her mid-late ‘teens’ at that time. 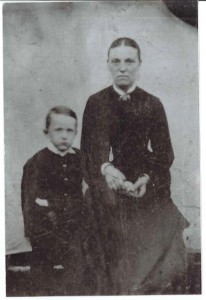 Photograph 2 - This photograph appears to date from the 1870s. The details of the lady’s skirt are rather murky and something odd has happened to the picture, around her waistline, but her hairstyle, pulled back into a high chignon and her long pendant earrings suggest that she was photographed during the 1870s. Agnes Waldie would have been aged around 30 at that time, or thereabouts, which looks fine to me. Her son is breeched, so he must be at least four or five years of age.

Q: Please can you shed some light on these photographs. My 2 x great grandmother was Mary Vallance, born 1834 at Newbold Verdon, Leicestershire. She had an illegitimate son, my great grandfather, Joseph Vallance, in 1854. In 1861 she married John Bromley: they had a family, recorded on the 1871 census; then they emigrated to Texas, USA. However a headstone in Lafayette County, Texas, indicates that Mary had passed away by 1872! These photos came to me via a cousin living in Dallas. He believes that the female photograph taken by Thos Johnston of Leicester is Mary Vallance/Bromley. The other photographs, mostly taken in Birmingham, are of unknown people: they are almost certainly relatives of Mary who remained in England: please can you help me identify them by estimating the dates and giving an opinion as to the age of their subjects. The family were poor framework knitters and a cordwainer: I wonder why they might have used a Birmingham photographer rather than a local Leicester one. 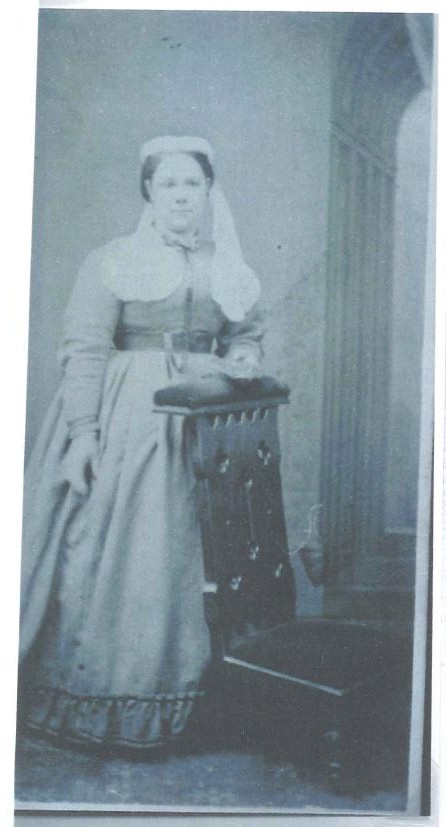 Un-numbered photograph by Thos Johnson of Leicester - This is rather an unusual photograph. Judging from certain elements of the dress worn by the young woman, the date is around the end of the 1860s or turn of the 1870s, although she does not wear the layered garments and bustle projection that was developing at that time. She looks very young, however, which could explain why her dress does not have a completely adult look about it. She also wears a curious white headdress with trailing lappets and is holding a book that could possibly be a bible. In view of these features, I would suggest that this could perhaps be a confirmation photograph. In my opinion she is far too young to be Mary Vallance, who would have been aged at least 35 when this photograph was taken. 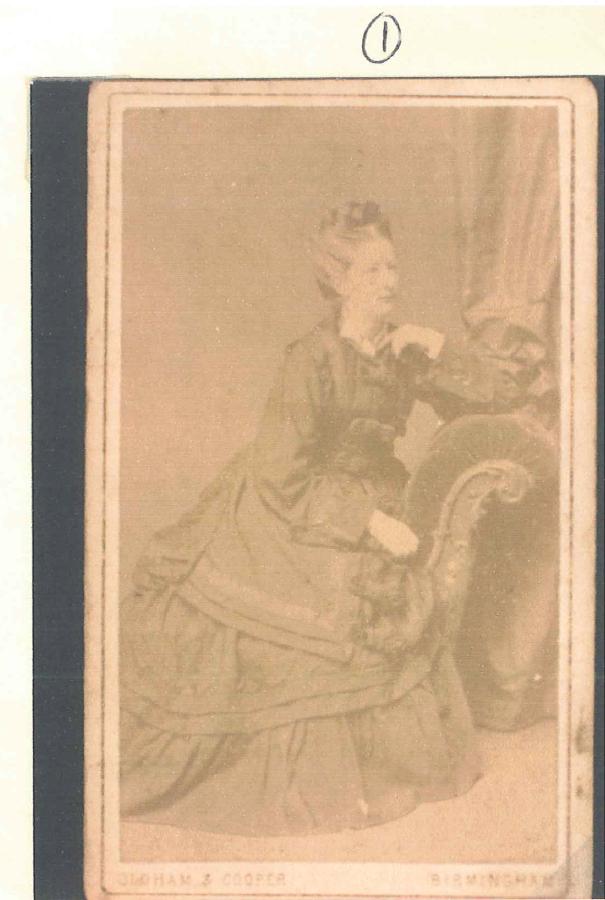 Photograph 1 - Here is a fashionable young woman dressed in the style of c.1869-75 – the years when the first bustle was in vogue. We see this from her layered garments and the projecting skirt fabric behind her waist. At this time hairstyles were also very ornate, as displayed here. The image is rather fuzzy so I cannot judge her age precisely but she appears to be fairly young, perhaps aged in her late ‘teens’ or 20s. Since she was photographed in Birmingham, she must have been living there or visited regularly. You could consult the 1871 census to see which ancestors were based in Birmingham at that time. Leicestershire ancestors are more likely to have used a local studio. 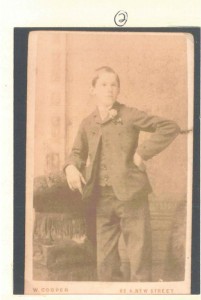 Photograph 2 - It is difficult to date photographs of male subjects very closely: a view of the back of the mount usually helps with determining a more precise date, but in this case we only have the image to go on. This ancestor wears a regular three-piece suit, the neat high collar of the jacket suggesting a date in the mid-late 1880s or 1890s. His buttonhole suggests that he was marking a special occasion. He looks very young to me –essentially just a boy aged somewhere between about eleven and fifteen years old. 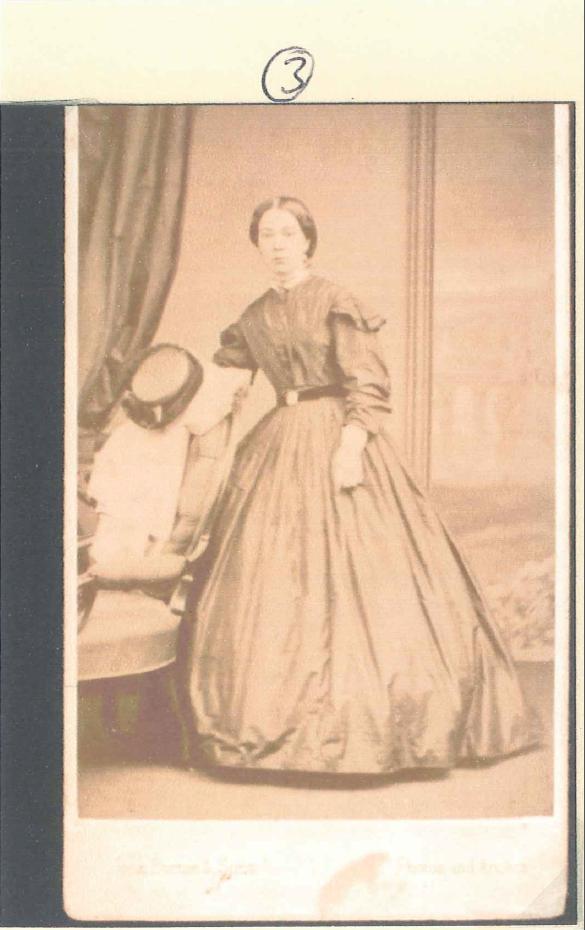 Photograph 3 - This is an early carte de visite photograph dating from c.1861-65, judging from this ancestor’s appearance. Typical features are the vast circular skirt worn over a crinoline frame and her hair, worn in a low chignon behind her neck. She holds a neat round hat that was the characteristic style of the early-mid 1860s. She looks rather youthful, perhaps aged in her late ‘teens’ or very early twenties. 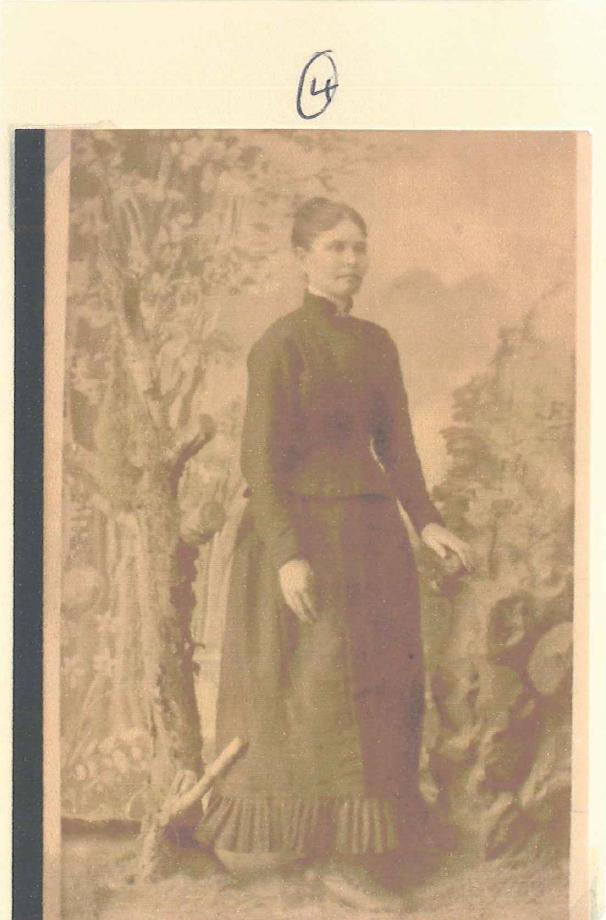 Photograph 4 - The rustic scenery here reflects studio developments of the 1880s, when ‘outdoor’ settings became fashionable. This ancestor’s fitted bodice with high neckline and narrow sleeves and her severe hairstyle suggest a date in the later 1880s, although she does not wear the bustle that was fashionable until c.1889. In this scan she looks to be fairly young, perhaps aged in her twenties or thereabouts. 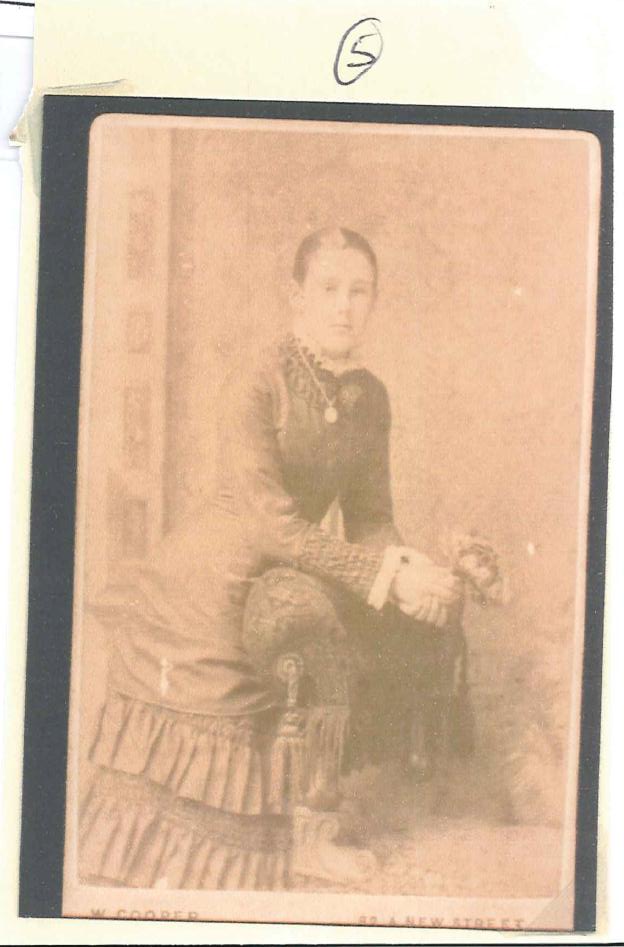 Photograph 5 - There are plenty of clear high-fashion details to date this studio portrait closely to c.1880-83. The elongated cuirass bodice, in vogue during the late 1870s and early 1880s, is combined with various early-1880s features, notably the narrow layered, pleated and shirred skirt, bands of shirring on the cuffs and neckline, white frill at the collar and prominent gold locket and chain. This girl looks young to me, aged probably in her mid-late ‘teens’, so she was probably born in the 1860s.