A new series of exhibitions this summer will tell the story, from both sides, of the Battle of Medway - the formative moment in the establishment of the modern British Navy.

A new series of exhibitions this summer will tell the story, from both sides, of the Battle of Medway - the formative moment in the establishment of the modern British Navy.

A major international exhibition at the Historic Dockyard Chatham presents the story of the decisive battle which ended the second Anglo-Dutch war, whilst further exhibitions at historic venues around Medway in Kent will bring the battle to life, and reimagine events from an contemporary perspective.

Breaking the Chain at the Historic Dockyard Chatham features a spectacular display of British and Dutch art, literature, historic manuscripts and objects on loan from a number of national and international cultural institutions, including the Rijksmuseum, both British and Dutch National Maritimes Museum, The British Library, National Portrait Gallery and the Royal Collection.
Join the Family Tree community
Follow us on facebook
Follow us on twitter
Sign up for our free e-newsletter
Discover Family Tree magazine​
Items announced to date include:

The Battle of Medway 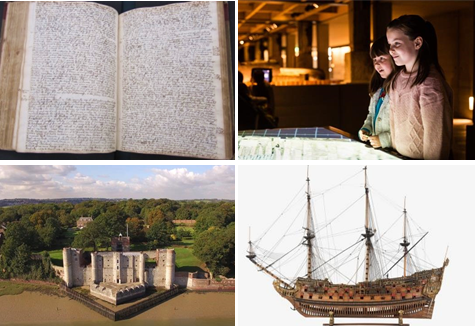 The Battle of Medway is one of the most important battles in the UK’s history. In 1667, the Dutch launched an assault on the British upon the River Medway, destroying their fleet and stealing the HMS Royal Charles, whose stern piece is on display in Amsterdam’s Rijksmuseum. The battle had great national and international significance, triggering a chain of events that brought the Second Anglo-Dutch War to an end.

The battle and its consequences were recorded painstakingly by one of Britain’s most famous diarists, Samuel Pepys, who worked as a naval administrator at the time. Coming after the Great Plague (1665) and the Great Fire of London (1666), the blow of the defeat led to a period of rebirth: Pepys was spurred by the Dutch victory to transform the British Navy through huge investment in new ships and dockyards.