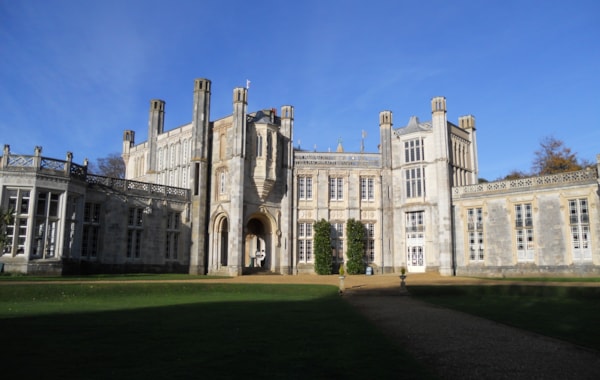 I quite like Queen Victoria. I don’t believe she was half as glum as people make out and there’s no evidence that she ever said, ‘We are not amused’. Although with the inevitable breaches of royal protocol, she may well have felt like saying it sometimes. There were certainly people who didn’t amuse her overmuch, including Peel, Palmerston and Gladstone.

Living in Christchurch (Dorset), I’ve oft made the short trip across the Solent to the Isle of Wight (the most expensive ferry crossing in the world apparently). We are not amused. Being an historian, I prefer the 1950s to the current day and the Isle of Wight is the place to head for if you wish to regress. Why, they even have the oldest London Underground stock still in use (reminding me that the Underground opened in January 1863, another Victorian innovation, and the world’s very first underground railway). I don’t know, those Victorians.

My faithful companion and trusty assistant ‘Mrs Steve’ accompanied me to Osborne House, a former royal residence, built between 1845 and 1851 for Victoria and Albert. This was to be their summer house, their rural retreat from life’s hurly-burly. Albert, of course, set to and designed the place himself in the style of an Italian Renaissance palazzo. Some critics might describe it as a bit higgledy-piggledy. Maybe he had to rush it as he also had the Great Exhibition looming.

Unlike most visitors, I was not so interested in the house itself, but the royal church that lies close by, St Mildred’s at Whippingham. It’s just over a mile away if you drive, but less if you can fly. This was the church used by Victoria when she was in residence at Osborne. Now, we know that Victoria had nine children, the youngest of whom was Princess Beatrice (1857-1944). It was Beatrice’s fate to become her mother’s ‘companion’ after Prince Albert died, but she was allowed to marry (reluctantly one fancies on the queen’s part), and the wedding occurred right here, at St Mildred’s. The date was 23rd July 1885, when Beatrice was 28. Her husband, Prince Henry of Battenberg, was slightly younger, at 26 (the Battenberg name would eventually become the less Germanic-sounding Mountbatten). Sadly, the marriage was not a long one, for Prince Henry died of malaria whilst on military duties in West Africa (January 1896). He was buried in the Battenberg Chapel at St Mildred’s, where he would be joined by Princess Beatrice (d. October 1944).

Bournemouth lies just across the River Stour from Christchurch. Bertie visited both places. He was known as a fun-loving prince, much to his pa’s chagrin, for Prince Albert was imbued with a certain Germanic seriousness. When 19-year-old Bertie was sent to the Curragh (near Dublin) for Army manoeuvres in the summer of 1861, he didn’t do very well with the manoeuvres, well, not with those regimented manoeuvres at any rate. He appeared to do considerably better with some rather more unscripted manoeuvres, assisted by a young lady named Nellie (or Nelly), the prince showing a certain flair by legging it out of the barracks via a window to dock with his lady friend. Needless to say, Prince Albert went apoplectic.

By the time the playboy prince arrived in Bournemouth, he was married, to Alexandra, a Danish princess, but this would not stay his roving eye. Perhaps the most famous of his ‘companions’ was Lillie Langtry, the ‘Jersey Lily’, whose liaison with the prince lasted from 1877 to 1880. Ever resourceful, Bertie had a house built in Bournemouth (‘The Red House’ from its red bricks) ‘for the benefit’ of Lillie (whatever that might mean). There’s a blue plaque on the front and a foundation stone with Lillie’s initials and the date they began throwing it up (1877). It’s the rather famous Langtry Manor Hotel these days. Sadly, for Lillie, she didn’t get much ‘benefit’ from The Red House as the prince’s wandering eye spotted another society beauty, the French actress Sarah Bernhardt. It’s a fair bet that Queen Victoria wasn’t particularly amused with any of these goings-on either.

It’s no great surprise that Queen Victoria is heavily monumented around the UK. She was our longest reigning monarch, after all, with 63 years under her belt, a record recently surpassed by HM Queen Elizabeth II. Victoria had her Golden (1887) and Diamond Jubilees (1897), which gave local denizens the chance to erect more monuments. The Victorian era also saw Britain achieve something of an apogee in terms of power and prestige, which was probably a good excuse for putting up a few more monuments. Pretty much any town or city you visit, in the UK, will have at least one reminder of Victoria.

In Christchurch (Highcliffe village is at the eastern end of Christchurch), Princess Victoria is reputed to have visited the George Inn, presumably whilst paying a visit to the Priory, which is the town’s standout building and England’s longest parish church at 311 feet end to end.

Meanwhile, in Highcliffe village itself, there is the Sports and Social Club, in the main street, which was originally opened as a reading room in 1887 (yes, you’ve guessed it, it was that Golden Jubilee). This also explains why there is a representation of the queen herself staring down at us from the front of the building, with that date ‘1887’ below her head. I digress here, but I like the fact that philanthropic worthies of old used to open ‘reading rooms’ for the workers. Self-improvement was encouraged. I’m all for that.

A bit further up the main road, in Highcliffe, back in the direction of Christchurch, is Highcliffe Castle, a 19th century ‘castle’ of the faux persuasion. Bertie stayed here several times as Prince of Wales and monarch, for example, in 1880 (around the time he was ditching Lillie), he spent time on the beach here, swimming to and from the royal yacht, which was parked offshore. That 1880 visit saw Edward joined by his son George, the future George V. Another visitor to the ever-popular castle was Prince Arthur, the Duke of Connaught, Queen Victoria’s third son, who stayed in October 1892.

The most exotic of the royal guests to have graced Highcliffe Castle, however, was probably Kaiser Wilhelm II, who spent three weeks here in the winter of 1907, during which time he planted a tree. He visited the Priory, admiring the tone of the organ and signing the visitors’ book, and also paid Bournemouth a visit with his cavalcade. Wilhelm was popular in Britain at the time, but this would all change in 1914, when the two countries found themselves at war.

I tend to think of the Victorian era as fairly settled in Britain, however, there was plenty of unrest, with poor working and housing conditions, and a lack of Parliamentary representation inciting working class people to take to the streets.

One of the movements to try and achieve a fairer political system, including an extension of the franchise (to more men, not women), was that of the Chartists, which was most active between 1838 and ’48, and tried to petition Parliament (unsuccessfully) for changes to the system. We tend to think of the Chartist movement as largely peaceable, however, there were flash points, the worst of which occurred in South Wales.

I was in Newport on a jolly, attending a football match between Newport County and Cheltenham Town (for the record, it finished 1-1). Whenever I visit a town or city for the first time, I like to try and find a bit of history. I set off in pursuit of Chartists.

It was in November 1839 that a crowd of Chartists, estimated to have been 10,000 strong, descended on Newport, intent on liberating Chartist prisoners they believed were being held in the city’s Westgate Hotel. The crowd arrived in the small square outside the hotel at around 9:30am, demanding the release of the captives. A brief, but bloody battle, then ensued, as soldiers defended the hotel, a battle that left over 20 demonstrators dead, and over 50 injured. Amazingly, given that this was 1839, the three ringleaders were sentenced to the ultimate historic sentence for traitors, to be hanged, drawn and quartered, although, mercifully, the sentence was commuted to transportation.

The Chartists campaigned for six reforms, of which five would ultimately be granted (the exception being annual parliaments). This was not really the Chartists’ success though: the ‘establishment’ made the reforms when it was good and ready. The extension of the franchise was not a Chartist success either, the Reform Acts of 1867 and 1884 being granted by Tory and Liberal governments respectively.

In 1989, a sculpture was unveiled outside the Westgate Hotel, in Newport, to commemorate the 150th anniversary of the rising. The punishment of hanging, drawing and quartering was finally abolished in 1870 and the death penalty for treason (believe it or not) was not finally abolished until 1998.

Well, of course, the railways were a Victorian triumph (the first proper ‘railways’, as we would recognise them, appeared between Victoria’s birth and accession, however, the railway ‘mania’, which saw them proliferate around the country was very much a Victorian phenomenon). I’ve already mentioned the London Underground, the world’s first underground railway.

Isambard Kingdom Brunel was very much the heartbeat of the Great Western Railway (GWR), envisaging and constructing its mainline from London Paddington, all the way to Penzance in the far South West, where the station opened in March 1852. Brunel himself would pass away 7½ years later, in September 1859. The story of the ‘royal train’ would arguably begin on this GWR line out of London.

There was some understandable nervousness about train travel in its early days, which extended to the royals. Prince Albert, ever at the forefront of technology, tried first, travelling from Slough to London, in November 1839, at the conclusion of his visit to Windsor Castle, to woo the queen. The GWR wasted no time, building a special carriage in 1840 replete with ‘furnishings and decorations’, which sounds like the start of that royal train. Albert used this for further excursions, before he finally persuaded a reluctant queen to take to the tracks in June 1842, reprising that first journey of Albert’s from Slough to London.

And Swindon? Well, I was in GWR heartland, its HQ, where it built the massive works where it would build and maintain its fleet of locomotives, carriages and wagons. The refreshment rooms here had been notorious (Brunel himself didn’t rate them). They were dubbed ‘Swindlem’ and possibly started off that whole cacophony about British railway catering. There’s even a story, most likely apocryphal, that the location of the works was determined by Brunel lobbing a sarnie out of a carriage window. I wouldn’t put anything past the man.

So, there we have it, a whizz around some of my favourite Victorian & Edwardian sites. A palace they built and a house to hideaway, a castle where royals stayed in droves and a myriad of monuments to the queen, reminders of revolts that threatened them and railways that transported them. It’s an era that’s very much still with us.

Images courtesy Steve Roberts. Highcliffe Castle, which attracted many royal visitors, including King Edward VII and Kaiser Wilhelm II; and the Red House, built by Prince Bertie 'for the benefit' of his love Lillie Langtry.