Seven reasons you can't find your ancestor on the Scotland census Locate missing ancestors on the census for Scotland with our seven-point checklist.

The census is one of the most useful records for tracing ancestors, and yet there can be instances when you simply can’t find an ancestor on the census.

Read on to find out why your ancestor might be missing from the census, and some ideas on how to locate the person in question.

1. They were visiting friends or family elsewhere

2. They had left the country

3. They lived outside a ‘traditional’ home set-up

4. There had been a transcription error

Despite the hard work of census enumerators over the decades, the truth is that errors were made, either at the point the census was taken, or as census information has been transferred into different formats over the years.

If you can’t find your ancestor where you expect them, try searching for a different member of the same family, looking at nearby streets, and searching using the variants in the next paragraph. Also, always examine the original census entry rather than just a transcript, as you may be able to identify a misspelling at source.

5. Their name was spelt incorrectly

6. They are listed on a lost portion of the census

Despite its usefulness as a family history resource, unfortunately some portions of the 1841 census are missing. National Records of Scotland has a useful guide here that explains the context of the missing pages (mainly parishes in Fife) and lists which places were affected. 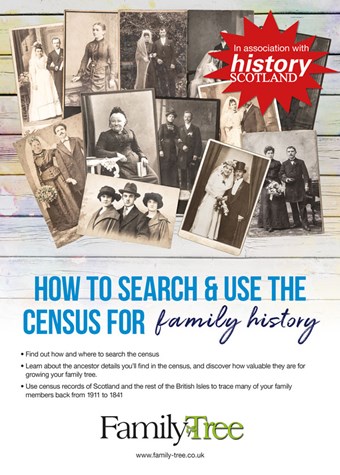 And to learn even more about how to use the census for your family history, download our new PDF guide just £1.99, HERE.