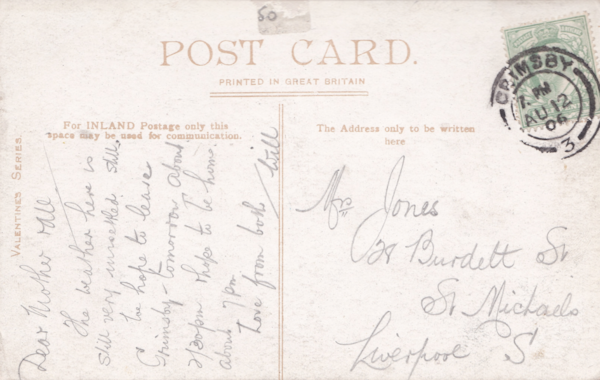 The message on the back of Emily's postcard

Helen Baggott used her genealogical skills to research the life stories behind a collection of historical postcards, which she has turned into a book. Here she shares an extract...

Helen Baggott used her genealogical skills to research the life stories behind a collection of historical postcards, which she has turned into a book. Here she shares an extract...

When I began researching the postcards for Posted in the Past I had no idea where the stories would take me. I began with a name and address and then searched for the family through various genealogy resources. Each card had a story to tell, it was my task to find them.

As fascinating and surprising as it was to discover connections to events of national and international importance, of a disaster that is only eclipsed by that of Titanic, it was often the routine stories that captured my imagination. However, I was as surprised as any reader might be that I found stories that linked postcards to Lord Kitchener, Edward VII’s doctor – and even Arnold Schwarzenegger. Despite those household names, it’s Emily Jones’s postcard that I’m sharing here.

Dear Mother and All

Dear Mother and All

We hope to leave Grimsby tomorrow about 2.30pm hope to be home about 7pm.

In 1911, Emily Jones née Crease (b.1851) lived with ship joiner husband Samuel (b.1857) and son Ernest, a messenger, in Liverpool. The couple had eight children and by the time of the census two had died. The postcard was sent home by son William – Will – who is listed in 1911 as a shipping clerk.

• How family history inspired my writing: from the River Kwai to the Thames

Emily was born in Somerset and in 1861, at the age of 10, she was working for a laundress and baker in Bath. Ten years later and she was still in Bath, working for another family as a cook.

When she married in 1877, Emily recorded no employment but was living in the Liverpool area. Although she had signed the marriage register, her signature didn’t flow with the same ease the others appear to have. Perhaps she had learnt to sign her name by copying it.

As a child, Emily didn’t benefit from the various Acts that would eventually limit the working hours of children and provide free education. A generation later and it’s so very different. The couple’s eldest daughter, Hannah, became a teacher and we know Will, who sent the card, was a clerk.

A tale of hardship & of spirit

There’s no doubt Emily had a hard life. Even when married, it wouldn’t have been much easier than when she was a child. The family lived near the docks in Liverpool and her husband’s employment was not guaranteed.

Emily and her husband were able to do something her parents were unable to – keep their children at home and for them to be educated. What makes this card so important is that it illustrates the changes experienced within the lifetime of one person. It tells of hardship, but it also tells of spirit. Emily must have been so proud of her family and their achievements – and she must have been a remarkable person.

You can discover more about Posted in the Past here and read the review in the September 2019 issue of Family Tree, on sale from 30 July 2019.

The book is available in paperback from shops and Amazon priced £9.99.