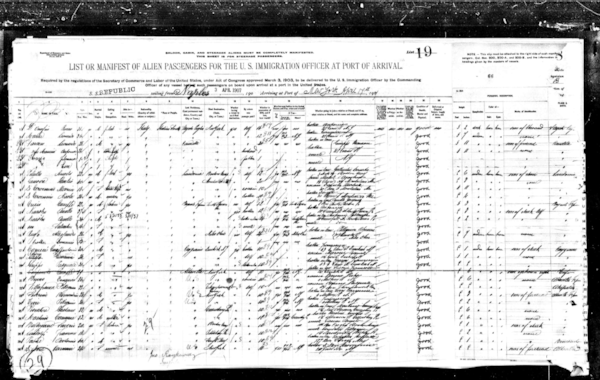 Manifest for the SS Republic, 1907

There are a variety of things a person can learn about their relatives from reading a passenger ship manifest. These records (which cover the years 1892 to 1957) reveal an immigrant’s given name and surname used in their country of origin, which can be quite different from the names we knew them by. The column detailing the name and address of the person the immigrant is joining in America may lead to an expanded discovery of family.

The immigrant’s last place of residence (town & country) can lead to an opportunity for further online research in that town or country’s archival records—or become a new vacation destination to retrace your relative’s journey!

But there are other things on a manifest that occasionally appear that aren’t so commonly understood. What if your relative’s name is crossed out? That might mean they upgraded their class of ticket. Their original listing was crossed off, and they were added to the page for the upgraded passenger class. You will find their name listed twice on the ship manifest.

It might also mean, however, that your relative did not board the ship. They might have missed it or changed their plans, or fell ill and health officials prevented them from boarding. You might see notations in the left hand column next to their name as "N.O.B." (Not On Board), "did not sail," or "Not Shipped." If that’s the case, continue searching for your relative’s immigration record because you haven’t yet found it!

The children of 'alien passengers'

It’s possible to find your relatives on the “List of Alien Passenger” manifest page, but you notice notations written next to their children: USB or US Born. That indicates the parents were foreign-born but their children were born in America. Children of US birth were not inspected in the same manner as non-citizens upon returning to America. This can also reveal that a relative you had assumed was European-born and an immigrant was actually born in America into an immigrant family.

You might also see “Claims USB or “Claims US Born.” This often indicated children born in the U.S. who had been taken back by their parents to the parents’ country as small children. As young people, they returned to the United States, but unfortunately, their parents had never obtained proper documentation of their earlier birth in America.

Non-immigrants on the manifest

You may have wondered why some people are marked as non-immigrants, yet they are not U.S. Citizens.  Usually, this indicated that this was not the first time this person entered the United States. There were travellers who did not plan to stay in America who were marked “Transits” or “In Transit.” They may have been on their way to someplace else, were only visiting, or were students who planned to return home. This was heavily seen with people passing through the Port of NY going on to Canada.

It’s worth mentioning an idiosyncrasy on the manifests that is specific to the British Isles. Although the people of Wales, England, Ireland and Scotland favored the use on a middle name or middle initial, as a rule, the ship pursers didn’t include those on the manifests when they were written.

Explore thousands of immigration records at the American Family Immigration History Center on Ellis Island, New York, and online via the Center’s website. There are more than 51 million records, including passenger records, ship information and original manifests.

The Community Archive is a growing collection of annotations to the passenger records. Members of The Statue of Liberty-Ellis Island Foundation create the annotations, which give new information on a passenger's background and life in the United States. Non-members and members alike can view the annotations. Find out more on the website.