How to date a 19th-century terrace Regency terrace with original windows, shallow pitched roof and doors set to the same side of each house

House history expert Trevor Yorke takes us through the architectural clues that can help you narrow down whether your 19th-century terrace belongs to the Regency or Victorian period.

The 19th century has left us a legacy of buildings from the elegance and refinement of the Regency through to the richly decorative and glorious structures of the Late Victorian period. 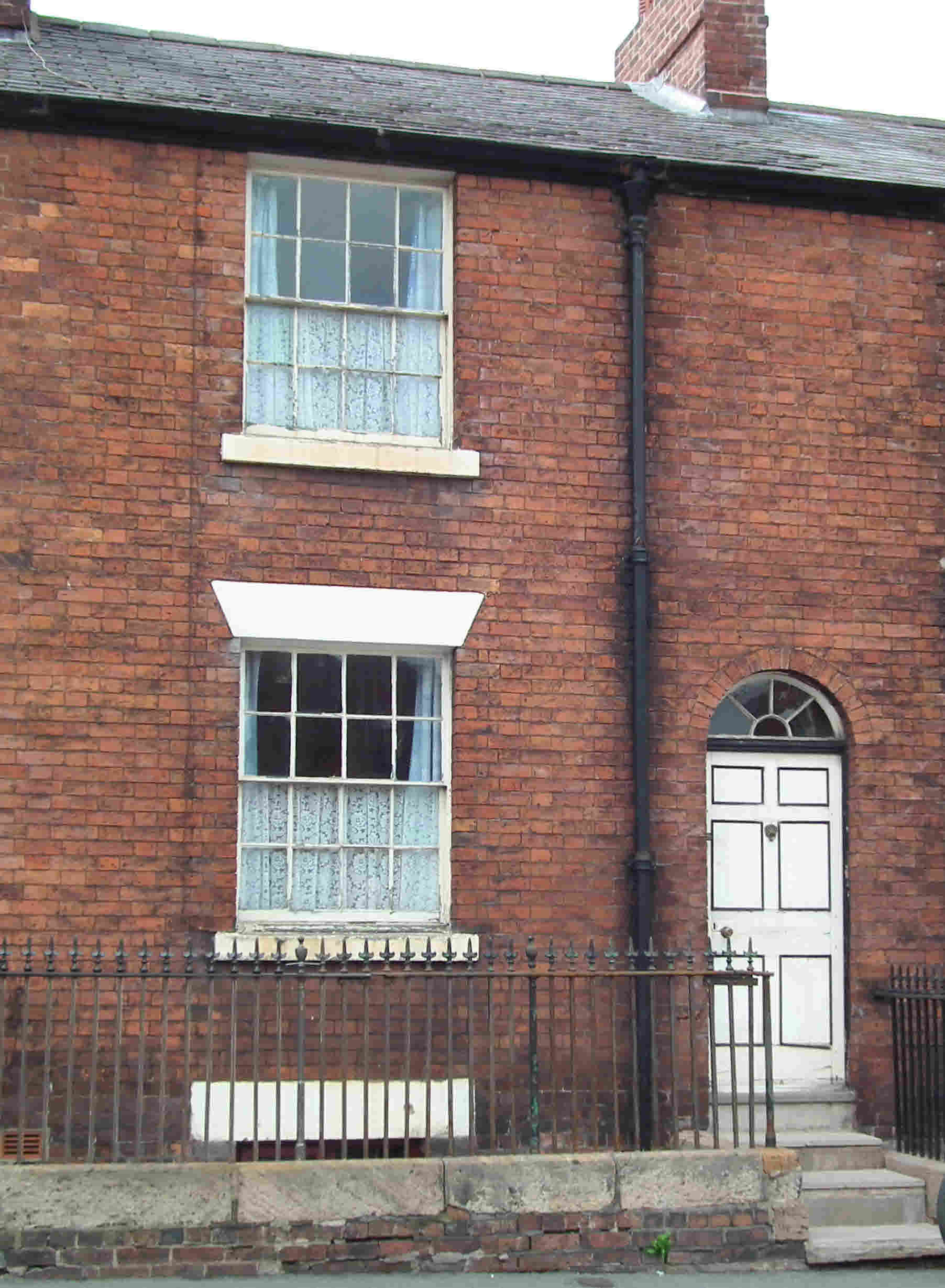 Yet the most familiar face of this period of rapid urban and industrial growth is the humble brick terrace, thousands of which still line the streets of our towns and cities. Two or three storeys high and largely made from brick, these functional, compact houses may appear the same at first glance, making it hard to precisely date them, but there are subtle changes in form and little details on the exterior that can help you narrow down the period in which they were built.

First, take a look at the roof. On Regency and early Victorian terraces, it was either hidden from view behind a low parapet or was of a shallow pitch covered in slates. 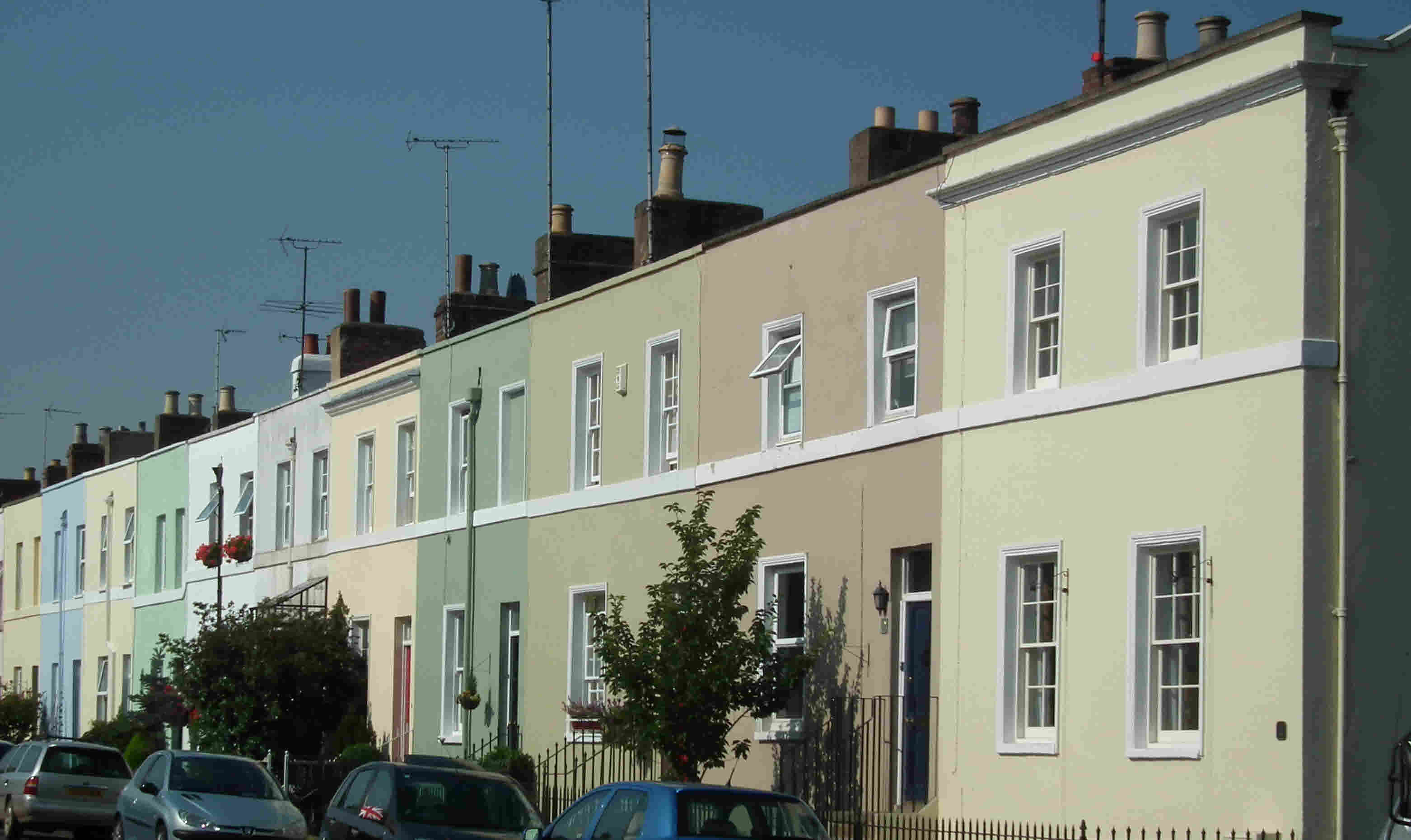 Regency terrace with stuccoed facade and roof hidden behind parapet

As the Gothic Revival became fashionable from the 1850s, so the roof became steeper and in the following decades, clay tiles with bands of shaped tiles and a terracotta ridge were popular. The eaves of the roof were generally tightly fitted above the uppermost windows of ordinary Regency terraces but as ceiling heights rose through the century, so this gap expanded and terraces generally grew in overall height. 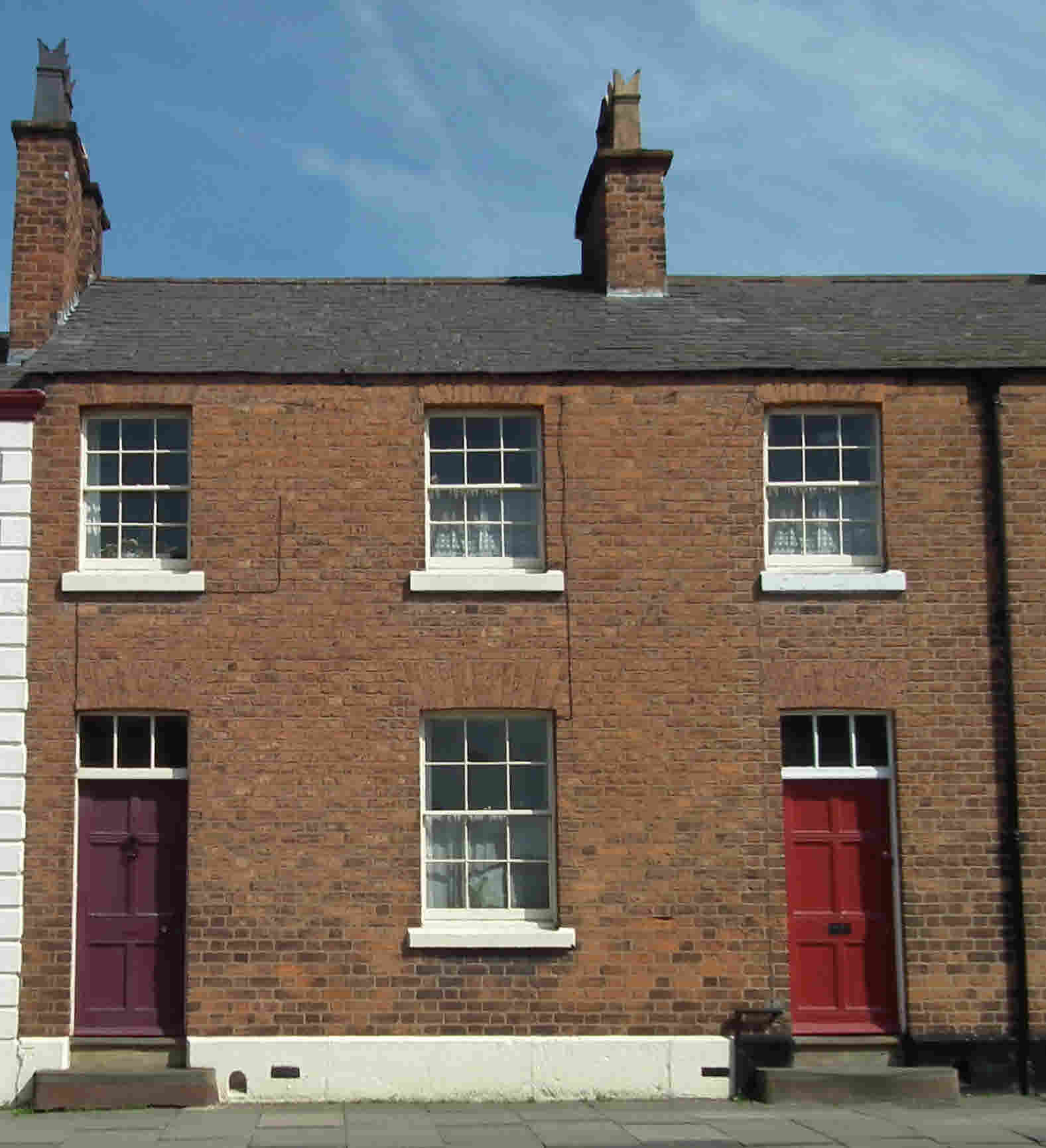 1850s terrace with all original fittings

The chimneys of early terraces tend to be short and plain but as the Victorians made the roof an object of display, so the chimney became more prominent with a decorative crown, while some in the 1880s and 90s had vertical bands.

There were also changes to the form of terrace houses during the 19th century. Basements were common in Regency and early Victorian terraces, providing space below ground for service rooms. These poorly-ventilated and lit subterranean rooms were phased out from the 1870s and it was more usual for the kitchen and scullery to be housed in a rear extension. These were of a single storey at first and then by the turn of the 20th century, a two storey structure was more common, with an extra bedroom or bathroom above.

Terraces in the first half of the century could have a railed-off open area in front but by the late Victorian period, a small garden space with a dwarf wall capped by a low rail or fence was fashionable.

Also look at the front doors, which in the first half of the 19th century tend to be set on the same side of each property, whilst in the second half they are more often set in pairs.

The walls can be full of clues too. Regency bricks were locally made and tend to have a greater variety in their finish, more imperfections and are often now crumbly in finish. By the late 19th century, more durable bricks with a regular finish and sharper edges were used for the façade, with cheaper common bricks down the sides and rear.

During the first half of the 19th century many houses had their brick walls coated in stucco, an external render, which was finished to look like masonry and painted in a stone colour (not bright white as they often are today). 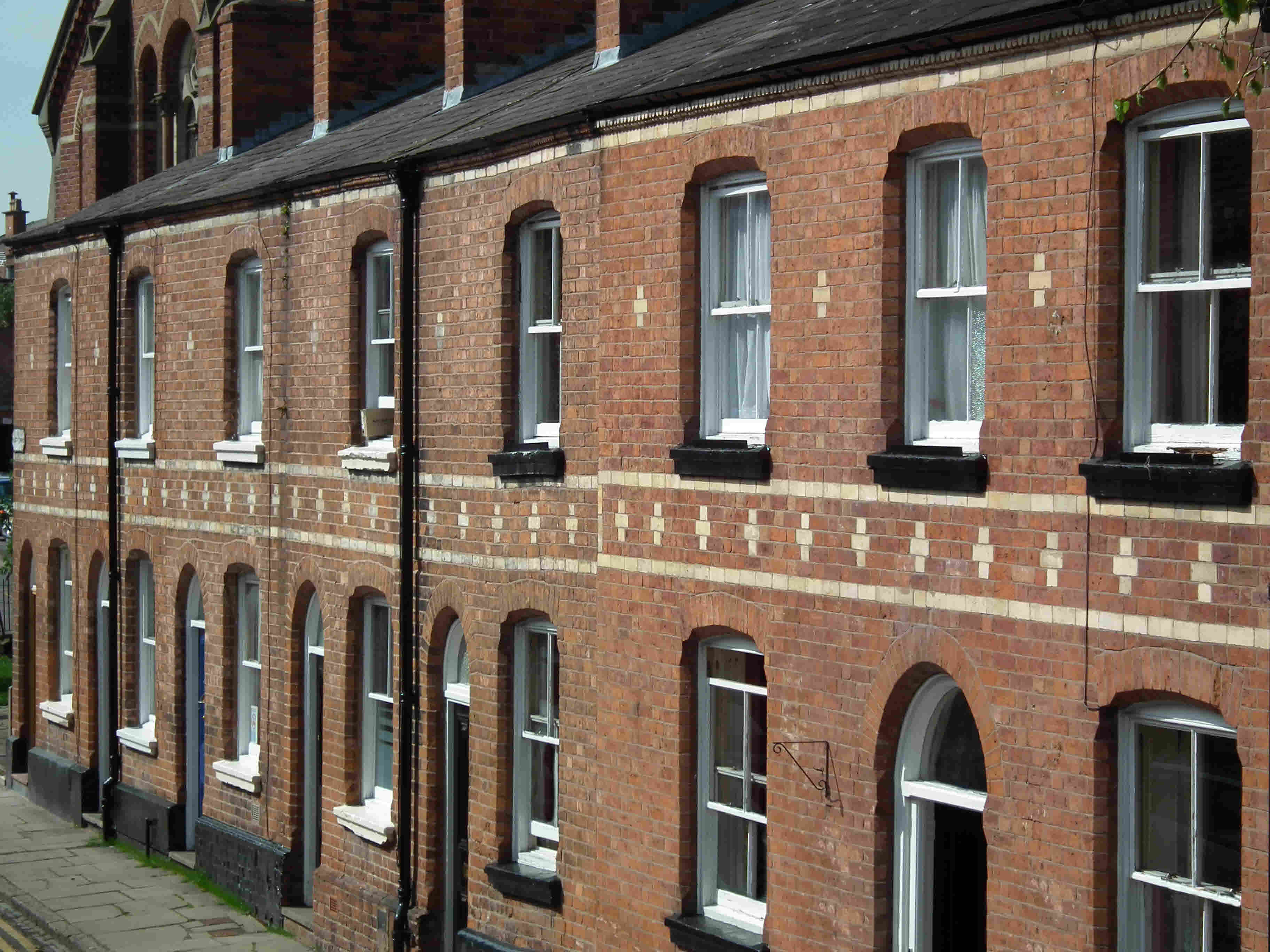 Gothic Revivalists promoted honesty in building so it became fashionable from the 1850s to expose the brickwork and add bands of different coloured brick to enliven the front. From the 1880s, plain brick often in darker reds was used, with raised patterns, ceramic tiles or terracotta mouldings for a splash of decoration.

Where original fixtures and fittings survive, they can help pinpoint the age of a terraced house. Sash windows with 12 or 16 lights, the individual panes of glass, were common in the Regency but by the 1850s, four lights and then in the following decade just two large panes were common. From the 1890s the upper sash was often divided up into small lights but the lower was kept clear so the view out was uninterrupted. Bay windows had been fashionable on the finest houses since the Regency, but by the 1860s they began to be fitted on more modest terraces, at first just on the ground floor but later in the century, standing two storeys tall. 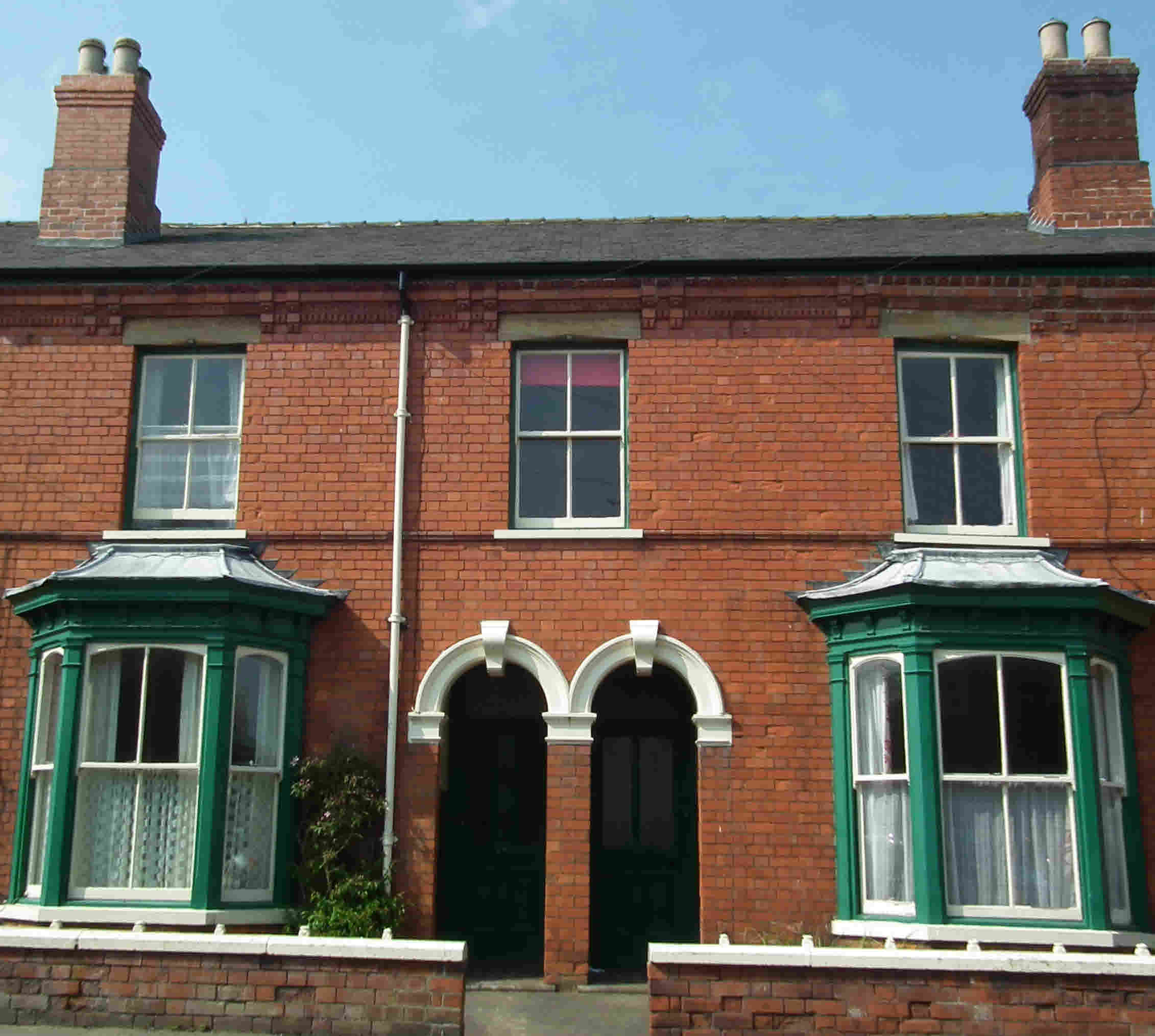 The front door of most modest Regency terraces comprised of six panels, although sometimes they had an odd number or included a circular element or other geometric shape. Early Victorian doors tend to be more formal and had just four panels.

By the 1870s glazing began to be fitted into the upper panels, a fashion which became more widespread by the end of the century, with stained glass patterns casting sparkling coloured light down the hallway. Fanlights were still standard on most Regency terraces, usually with a semi circular form divided up by radiating glazing bars or fancier patterns on better class houses. By the mid Victorian period a rectangular form with a single sheet of plain glass was common, often incorporating the house number in the centre.

Sometimes the materials which exterior fittings were made from can help date a terrace. Decorative ironwork balconies and porches were fashionable on the finer Regency properties, stone columns, terracotta plaques and fancy carved bargeboards were applied to Victorian terraces and painted timberwork with fretwork and spindles was in vogue on porches and balconies at the turn of the 20th century. 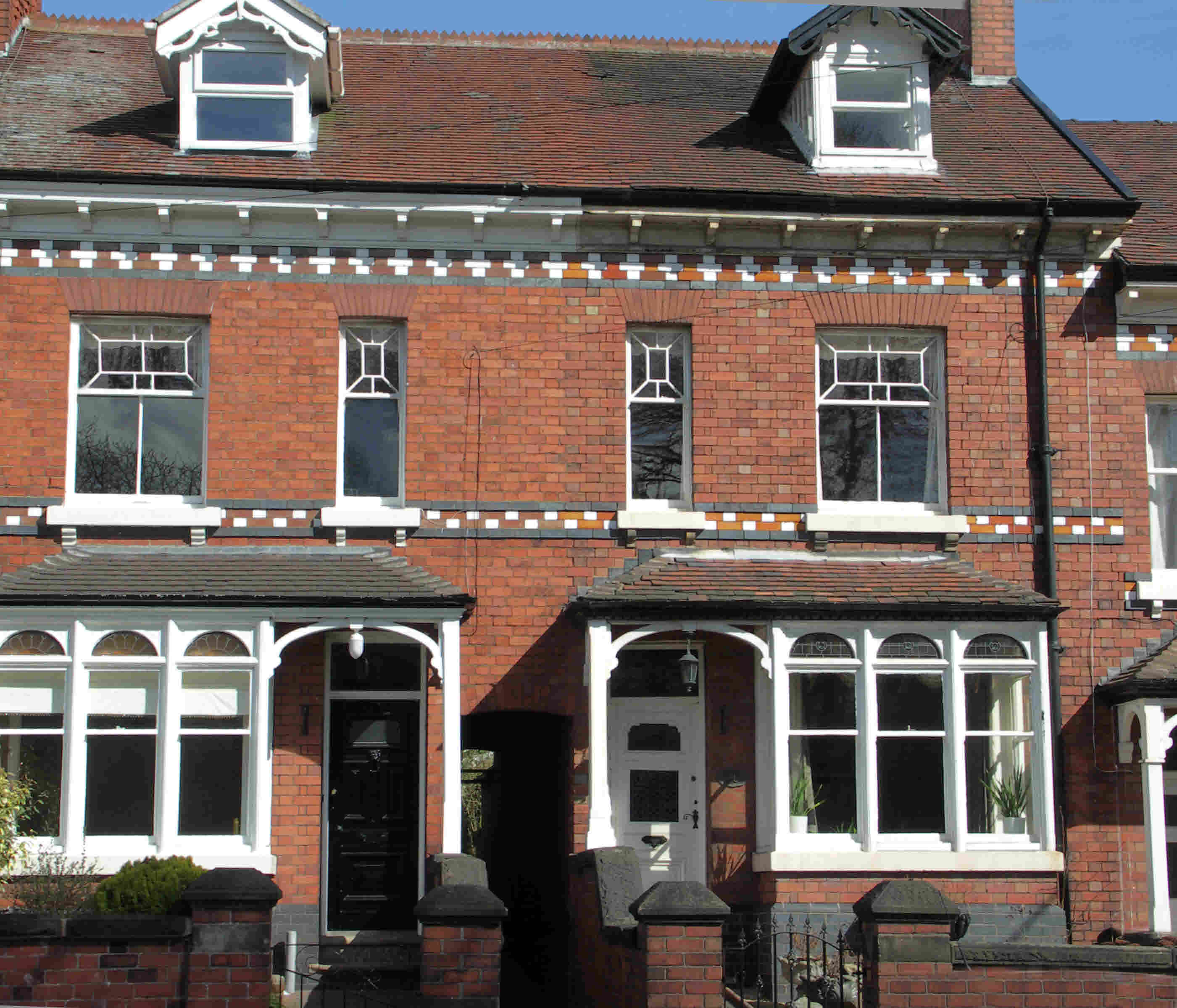 Trevor Yorke is a professional author and artist who has studied and written about various aspects of England's architectural and industrial heritage. He has produced many illustrated books that introduce the reader to these topics and writes articles and reviews for various magazines.

Visit his website for details of his building history books, which include Georgian & Regency Houses Explained, The Victorian House Explained, Arts & Crafts House Styles and Tracing the History of Houses.