How to find your ancestors at Cumbria Archive Centre, Carlisle 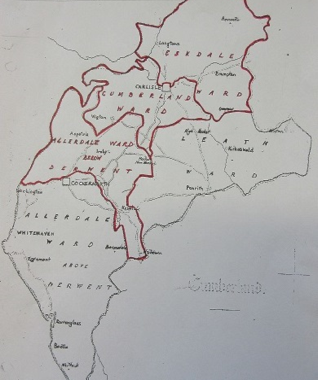 map of Cumberland showing the wards covered by militia records

Discover how to find your Cumbrian ancestors with our guide from Cumbria Archive Centre, Carlisle.

How to find your ancestors at Cumbria Archive Centre, Carlisle Images

Discover how to trace your Cumbrian ancestors with our guide from Cumbria Archive Centre, Carlisle.

Cumbria Archive Centre (Carlisle) is one of four centres across the county which together make up Cumbria Archive Service. The others are located in Barrow, Kendal and Whitehaven. Carlisle holds records relating to the north and north-east parts of Cumbria – in effect the northern part of the old historic county of Cumberland (pre local government reorganisation in 1974).

We hold a range of collections which are useful for family history research. These include parish and nonconformist church registers (the majority of which are on microfilm), wills, tithe and enclosure maps, with associated awards, school, hospital and coroner’s records (please note the latter are subject to closure periods) and employment records, such as service registers of the Cumberland and Westmorland Constabulary (also subject to closure). There are three series of records which are worthy of further description.

Firstly, militia records, which form part of the Cumberland Quarter Sessions collection. This type of record has not survived in many parts of the country and we are fortunate to hold them.

Militia Ballot Lists for 1797-1831 (incomplete series). The militia were a defensive force of able-bodied men balloted from the lists compiled annually. The returns survive for three of the five wards of Cumberland, Eskdale, Allerdale Below Derwent and Cumberland.  They list men aged 18-45 years (some years 18-30) giving details of name, age, occupation and the number of dependent children. They can be very useful to the family historian as they list most of the heads of households prior to the census.

It is also possible to trace the movements of individuals from parish to parish.  Some contain further information on physical infirmities. Some of the lists have been transcribed. The other series of records are the Militia Liable Books. Those men who were not exempt were recorded in these books. They detail those chosen and whether they served, were served by a substitute, absconded or paid a fine. They survive for the period 1797-1831 (incomplete series) for the three wards as above.

Secondly, Cumbria Archive Centre (Carlisle) holds a large collection of wills, which have been indexed.  Wills and associated records are another very important source of information for family historians. They can give valuable detail about a person’s social status and family relationships. Up to circa 1760 inventories listing house contents were often attached to the will and they give a wealth of details about household goods and the tools of his or her trade.

Letters of administration were granted usually to a person’s next of kin when he or she died without leaving a will and are rather less informative.

We hold wills, inventories and administrations for the whole of the diocese of Carlisle which were proved at the Bishops Court in Carlisle during 1564-1857. In 1858 the jurisdiction of the church courts was abolished and the present centralised system for proving wills was established so that the whole of Cumbria became part of the Carlisle Probate District registry. We hold wills for the whole of Cumbria for the period 1858-1941. Indexes are available for the full period.

Thirdly, Manorial records are an under-used source for family history, as they can be difficult to access and interpret. The manor was an institution that affected almost every aspect of the lives of our English ancestors. It determined rents, inheritance and use of land; it mediated in disputes, meted out punishments and controlled the quality of ale and bread. Latin ceased to be used in 1734 and there are documents in English before this date.

Manorial records can be found up to the 1920s and 1930, when the system came to an end. Our holdings of manorial records are extensive and include court books and verdicts, which provide details of admittances to and surrenders of tenancies, as well as disputes and rights.

Our public searchroom is open to the public from Wednesday to Friday, between 9.30am and 5.00pm. If you do not already hold a County Archive Research Network reader’s ticket, please bring proof of ID, showing your name, current address and signature.