Family history tips: how to avoid a brick wall As family historians, we tend to dread to avoid coming up against a brick wall in our research. But what if we could avoid that barrier in the first place? Read on for top tips from expert genealogist Chris Broom.

During my work, I am regularly reminded of the expression ‘prevention is better than cure’, as many of the brick walls I’ve been asked to research on behalf of clients turn out to be self-inflicted. So, what are the actions that family historians can take to avoid building these frustrating obstacles in the first place? Five of my top recommendations, in no particular order, are:

1. Be methodical, record all searches and re-trace your steps to spot errors.

2. Scrutinise original documents where possible, as they often contain include vital clues not captured by digitised indexes.

3. Ensure that you extract all relevant information from expensive certificates of birth, marriage and death. In my experience, the value of named witnesses and informants is often overlooked.

4. Regularly revisit online record sets, the volume and scope of which continues to grow exponentially.

5. Take time to understand the purpose for which records were created and their reach. For example, it was for some time my misconception that manorial records spanned a period pre-dating the 17th century. Discovering that certain manorial records were maintained until the 1925 Law of Property Act opened up fresh lines of enquiry in my own family history research and led to the discovery of ancestors in manorial court records created as recently as 1922.

A major resource that can help with property research is an early 20th century exercise carried out by the Inland Revenue between 1910 and 1915.

This was a national survey carried out by the Valuation Office, mirroring similar exercises carried out in England, Wales, and Ireland, where the issue of land ownership had been a particular emotive subject in the late 19th century.

The survey team used Ordnance Survey maps as the basis for their enquiries, but it can be complicated to determine which map was used (there were six possibilities), and to find the relevant 'hereditament number' for the property concerned. This is an extremely complicated process, outlined in an NRS guide available here, but even with this, you may need the help of an archivist on-site to assist you.

Once the property's hereditament number is found, you can then look up a relevant field book to find further details about it, including sketches of the property, and a description of its physical construction.

What could these records tell me?

To give an example, a recent house history I carried out for a client with a property in Maybole, Ayrshire, noted the extent of land within the boundaries where the property was based as 9.724 acres, the name of its proprietor, its tenant, the length of the lease, details of who was liable for rates and taxes, who was responsible for any repairs, and its valuation, broken down to the value of the house, and the value of timber available from the holding.

The record then provided a detailed description, of the main house, described as being two storeys in height with attics built of stone, roughcast and slated, three public rooms, a kitchen, and a scullery; four bedrooms, a dressing room, and two attic bedrooms. There was also a stable and motor house, a chauffeur's house (storey stone and slated), with a room, kitchen, and bathroom with hot & cold water gravitation supply, all of which was in good repair.

Difficult as this source is to use, the survey did cover the whole of Scotland, and may well reveal some useful gems for your house history. 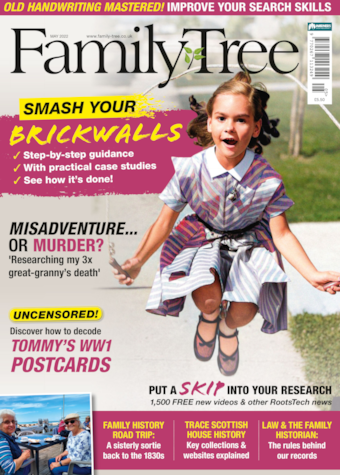 Extracted from an in-depth article on ideas for breaking through a brick wall, published in the May 2022 issue of Family Tree magazine. Click here to order your copy.

A native of Hackney, Chris Broom studied modern languages at Nottingham University in the early 1970s, before embarking on a 40-year-career in banking. Prior to his ‘retirement’, Chris’s interest in family history was sparked by a request from his father to find his biological parents.

Chris is a graduate of the Institute of Heraldic and Genealogical Studies, Canterbury, where he feels privileged to be a course tutor. He also runs a family history research and education business (www.chance-encounters.co.uk) from his home in Suffolk, specialising in East Anglia and Heraldry. In addition, he is chairman of the Alde Valley Suffolk Family History Group and promotes the study of family history at every opportunity.