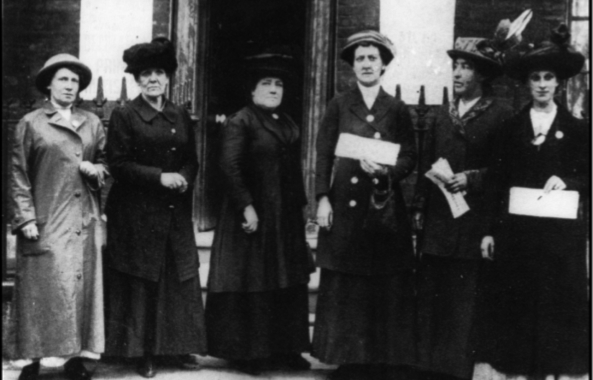 To mark the centenary of the 1918 Representation of the People Act, Michelle Ballard tells the story of her remarkable 2 x great-aunt, suffragette Jane Major

To mark the centenary of the 1918 Representation of the People Act, Michelle Ballard tells the story of her remarkable 2 x great-aunt, suffragette Jane Major.

Growing up, I would often hear about my maternal grandmother’s aunt, suffragette Mrs. Jane Savoy. I would hear how Jinny, as she was known, would chain herself to the railings yet always manage to avoid prison, and often wondered what else she may have contributed to the fight for women.

Jane Major was born on 14 January, 1861 at 14 Wilkes Street, Spitalifields, Whitechapel. The eldest of six children, her parents were shoemakers Jane Hughes and John Major.  By 1871 the family had moved to 7e, Virginia Row, Bethnal Green. With Jane missing on the 1881 Census, I believe this may be the period when her interest with the Suffragettes was ignited, and we next find Jane in 1891 living with her husband and son at 26 Usk Street, Bethnal Green.

Later moving to Bow, Jane and her sister, Hannah, who had a shop at 460 Old Ford Road, became the local midwives and helped many in need. This role would see them both adopting children left on the doorsteps of the Suffragette House and Hannah’s shop by unmarried mothers. Hannah’s shop would later be one door away from Sylvia Pankhurst’s The Mothers Arms baby clinic, which opened in 1915.

On the 1911 Suffragette Census, Jane, a Brush Maker, is living with husband Alfred Savoy at 143, St. Stephen’s Road, Bow. Many suffragettes walked the streets on census night, or defaced their returns in support of the fight for votes for women. Alfred, a non-believer in the Suffragette cause, completed the census, showing a marriage of 30 years. However, their marriage doesn’t appear to have been registered until 25th February, 1924 at Poplar Register Office. Despite his stoic principals, it seems Alfred and Jane were living a scandal!

With Alfred a non-believer in the cause, he was strongly against Jane’s involvement and refused her to use his name in association with the Suffragettes. Jane therefore took on a pseudonym of ‘Mrs. Hughes’, her mother’s maiden name.

On 23 May, 1914 The Woman’s Dreadnought (edited by Sylvia Pankhurst) records ‘Mrs. Hughes’ as one of the speakers at the well documented Woman’s May Day at Victoria Park. Here, Jane spoke on the plight of those in the sweated industries. Many were arrested at the event, but not Jane! A 1970s  BBC mini-drama, Shoulder to Shoulder (in which Jane is portrayed by actress Maggie Flint), depicts this event alongside Jane’s key role in the movement; her meeting with PM Herbert Asquith.

In 1914, Sylvia Pankhurst, just released from prison, is carried by stretcher and lain across the steps of the House of Commons. Here, she demands an audience with PM Asquith threatening to die on the steps if denied. And so, her demands were met. The election of six women by the East London Federation of Suffragettes would form a deputation, presenting themselves to PM Asquith on the morning of 20th June 1914, one of which was Jane Savoy.

Following Julia Scurr’s introduction, Jane was first of Sylvia’s ‘little band of poor mothers’ to speak.  A short and stout woman with a very good heart, she explained her gruelling work as a Brush Maker, the treatment and pay she received as a woman. But when reaching into a bag to extract a specimen brush, the Government ran for the door. They believed she had a bomb! A record of the encounter was later printed by Sylvia in ‘Everybody’s Weekly’, 22 July, 1933.

Good-humoured sympathy pervaded the scene as she told her story.

“This is a brush I am making for twopence; it is sold wholesale for 10s. 6d. I work from eight in the morning till six at night making brushes and four hours at housework – fourteen hours a day.  My hands get cut with the wire.  I have worked at the trade 43 years.  As I have to work so hard to support myself, I think it is very unfair that I cannot have a voice in making the laws I have to uphold.  I think I ought to have a voice in electing our Member of Parliament.”

Asquith was moved by the Deputation’s stories.  The Press reported:

“I will take all these things into careful consideration... On one point I am glad to say I am in complete agreement with you... if you are going to give the franchise to women, you must give it to them upon the same terms that you do to men. That is, make it a democratic measure... If the change has to come, we must face it boldly and make it thorough going and democratic in its basis.”

Following the deputation, Jane continued to be a local hero, and in 1919 organised a large Peace Party held in Norman Road, Bow to mark the end of the Great War.

Jane died on Friday, 13th January, 1928, 5½ months before her efforts as a suffragette would come to fruition with the passing of the Bill for votes for all women over 21.  A very ill woman, she suffered with dropsy and palpitations, passing a day before her 68th birthday from acute kidney disease.

Sylvia Pankhurst and MP George Lansbury, both neighbours and family friends, wrote fondly of Jane. In the same article she described Jane’s meeting with Asquith, Sylvia closed with an endearing description of Jane’s character saying “Mrs. Savoy’s eyes are closed now in their last sleep.  The grey streets of Old Ford Road are greyer and colder for her loss”.

George Lansbury’s book Looking Backwards and Forwards (1935) devoted a chapter to Jane Savoy as ‘A Woman of the People’,  his closing tribute being: “My friend and neighbour has gone on.  Her work follows her, and one day the women of England will lead us out of the misery and degradation of slumdom and poverty, and will do so because millions of Mrs. Savoys have shown by their lives that it can and will be done.”

Jane’s funeral procession passed through the streets of the East End to her resting place, a common grave in Woodgrange Park Cemetery near Olympic Park, Newham, Stratford.  Every fifteen years common graves are reburied on so, alas, no headstone exists to honour this wonderfully kind, strong-willed and determined lady who stood up and took part in changing history.

Read more about women's history in a special themed issue of Family Tree, published in June.