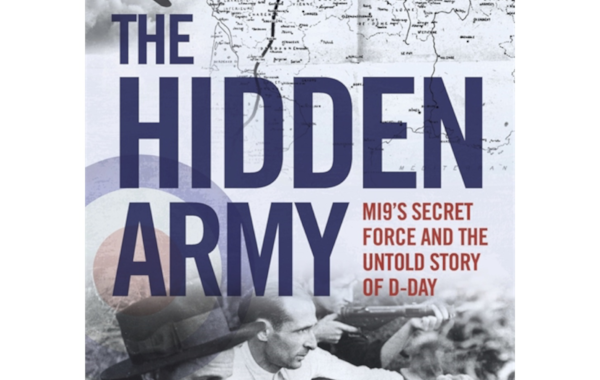 Matt Richards and Mark Langthorne tell the incredible story of how hundreds of pilots and soldiers were hidden right under the nose of Germany's largest ammunition base by Belgian agents and the French resistance.

The Hidden Army of Freteval Images

Matt Richards (pictured) and Mark Langthorne tell the incredible story of how hundreds of pilots and soldiers were hidden right under the nose of Germany's largest ammunition base by Belgian agents and the French resistance.

June 1944. The tide of war had turned and the Allies were about to launch the greatest military operation in history and cross the English Channel to drive the German army back, so liberating France and the rest of Europe.

The months and weeks leading up to D-Day had seen Allied bombing runs over Europe intensify as the RAF and USAAF sought to soften up German defences and disrupt their communication and transport infrastructures. This proved an extremely effective strategy.

However the consequences of the increased intensity of aerial bombing meant that more and more Allied aircrews were being shot down in the skies over France. What’s more, the fact that their very targets included transport links meant that the potential escape lines for these downed airmen, into Spain for instance, were no longer viable.

A strategy is needed

It was vital that these downed Allied airmen evaded capture and were repatriated to Great Britain as quickly as possible to rejoin the war effort. While aircraft could be constructed or repaired quickly it took much longer to train the aircrew to fly them and, if the Allies were to be ultimately successful on the ground they would need to dominate the skies also.

A young officer at MI9 was tasked with coming up with a strategy for these downed airmen. Previously, most had been kept in safe-houses in France, Holland and Belgium before being transported to Paris by members of the French Resistance. Here, once their identities had been verified, they would be shifted covertly through France and across the Pyrenees into Spain whereupon they could be sent back to Great Britain to rejoin the war effort.

But these escape lines had not only been disrupted by Allied bombing, they had also been infiltrated by Nazi agents and could no longer be depended upon. Airey Neave, the man at MI9 in London charged with escape and evasion, was faced with a seemingly insurmountable problem. There were up to 500 downed Allied airmen on the run in France and something had to be done.

A plan is hatched

Neave pondered every possibility to get the airmen safely out of France. He was an escapee himself, having been the first Englishman to successfully escape from the notorious prison at Colditz. But rather than escape, Neave turned instead to thoughts of evasion and concocted a plan so audacious that most in MI9 thought it too risky to even comprehend.

His bold idea was simple: he would somehow gather together the 500 downed airmen and corral them in the one place the Nazis would never think to look – right under their very noses. Then, following the success of D-Day they would be liberated by the advancing Allied army, with Neave himself determined to be the first man to reach them.

It really was a question of hiding in plain sight. But it was fraught with risk. Neave knew that if he could pull it off he would have masterminded the greatest feat of evasion in history. But if it failed he would have the blood of 500 men on his hands.

Despite all the opposition to his plan at MI9, Neave had the backing of his boss, Norman Crockatt, as well as the Air Ministry and was given the go-ahead.

At once Neave recruited the help of two Belgian agents, Jean de Blommaert and Lucien Boussa. Both had been members of the Resistance before being forced to flee to England. Their knowledge would be invaluable if this was to succeed.

Neave’s plan revolved around finding a suitable location for the 500 men to hide in. It needed to be large enough to conceal them, have a water supply, be close to active French Resistance networks who could both protect them and supply them with food, have suitable drop sites close by for parachuting in extra supplies, be near to a railway station to transport the Allied men there in the first place and also be close enough a large German military installation to fulfil the general idea of hiding in plain sight.

The location is chosen

Between them they identified  Freteval Forest near the town of Chateaudun, 100 miles south of Paris. It was the ideal location as, close by in Cloyes, the Germans had an ammunition facility and had deployed a large number of soldiers. No-one would ever suspect the Allies of hiding 500 men so close to the enemy.

The forest at Freteval was 300 square miles in size, had a natural spring, afforded great protection for anyone hiding within and was close to active Resistance groups. It seemed perfect, but Neave knew that just getting the men there would be a risky operation. And once embedded with the forest, these men would have to survive in near silence for many months, on limited rations, and with the constant threat of betrayal and discovery.

With the date for D-Day fixed, Neave threw all his efforts and resources into his plan. He named it Operation Sherwood and soon de Blommaert and Boussa were parachuted into France to begin setting up the great evasion plan. With the help of a local gamekeeper and fugitive Gendarme, a site within Freteval Forest was identified and a detailed plan made.

On the eve of D-Day the first thirty evaders to be taken into the forest had been transported to the towns and villages nearby and hidden in the homes of Resistance members. None of these thirty men – British, Americans, Canadians, Australians – had any idea what was in store for them but as Operation Overlord began on the Normandy beaches Airey Neave gave the order for these men to be taken into the forest.

Over the coming weeks and months they would be joined by countless other downed airmen and escaping soldiers from Allied units. They would be faced with a gruelling and traumatic existence: little food, barely any contact with the outside world, no escape from the harsh summer sun, snakes, spiders and wasps, communication only in whispers and, all the while, they faced the imminent threat of discovery and death at the hands of the Germans.

There would be close calls and near escapes, medical emergencies and failed parachute drops, internal conflicts between nations and, ultimately, liberation at the hands of the SAS in a mission that nearly went terribly wrong.

By the end of Operation Sherwood, over 150 men had evaded capture and Airey Neave made good his promise to be the first man into the forest to liberate the men. Virtually all resumed their postings and continued the fight against the evils of Nazi Germany, 38 of them losing their lives during the remaining months of the War.

Operation Sherwood was an audacious plan, the brainchild of one man. It shouldn’t have succeeded, but thanks to Airey Neave’s planning and the efforts of the brave men and women of the Resistance it did succeed and many lives were saved.

Only one evader from within Freteval Forest is alive today. 94-year-old Ray Worrall remembers it like yesterday and is in no doubt how extraordinary the whole plan was. “It’s been described as a miracle,” he says. “I think it probably was.”

The Hidden Army by Matt Richards and Mark Langthorne is published by John Blake.