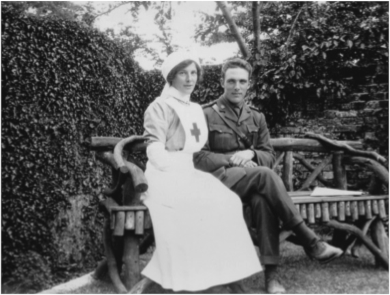 Army chaplains in the Great War

Sometimes as I cross a bit of rising ground between here and Headquarters, where the country is open, and the road only lined by an endless avenue of huge polled witch-elms, I stand in the darkness; watch the probing searchlights flicker on to the clouds and hear those grim far off voices speaking death. It is a new sound; it is another world; and it calls to unprecedented scenes and experiences. God grant as we march into it all, that there may arise a man in me that is sufficient to this new occasion!

These were the words written by the Rev. Herbert Butler Cowl, a young Wesleyan Army Chaplain, to his parents on his way to the frontline in 1915. These were the words that inspired a four year research project into the previously unknown story of a spiritual man – one man’s unique story of war and faith during the Great War.

Most of the Army Chaplains had no experience of working with soldiers in the field of war. Herbert and the thousands who volunteered during the war became Army Chaplains so they could do their best to support the men under their pastoral care. It was considered to be a righteous war and the churches responded with a supply of suitable candidates!

Suitability ranged from being physically fit, to the ability to preach ‘extempore’ (‘off the cuff’), an ability to ride a horse and to speak French. Herbert Cowl was one of the youngest Army Chaplains in 1914 - he had all of these qualities and he was only in his 20’s.

‘The Half-Shilling Curate’, as he was affectionately known by his family, tells the very personal story of a young Wesleyan Army Chaplain, the Rev. Herbert Butler Cowl from Christmas Eve 1914 to the end of hostilities in 1919. His descriptive account, from his own personal letters and writings, illustrate the value of faith during the war - the balance between serving God and carrying out his duties as a captain in the British Army.

As we remember the 100th anniversary of the Great War, the Army Chaplains seem to be an almost forgotten group of men who carried out a vital role during the war. Not only did they provide spiritual guidance and sustenance to the men, but they became major contributors to general morale. Also, they gave invaluable assistance in the Field Ambulances at the frontline, helping medical staff, from doctors to stretcher-bearers. They worked in the Home Camps and the Garrisons too, helping to prepare men for what they had to face at the front in battle and also supporting the wounded and sick soldiers who had returned to Blighty.

No man wanted to be forgotten and left behind in the mud of Flanders. It was comforting for the soldiers to know, and be re-assured, that if the worst fate should come to them, the padre, a good man would inter them and send them to Heaven with the full blessing of God!

Throughout history, men going to war have always sought the support of the representatives of their church. However, the First World War saw an unprecedented need and demand for Army Chaplains. During the war over 3,000 Chaplains were recruited from the different religious denominations. Of these, 179 made the ultimate sacrifice and gave their lives for King, Country and God. They were a band of brothers who have been largely forgotten over the last 100 years - we need to remember them! In October of last year, the new intimate and previously untold story of an Army Chaplain was published, The Half-Shilling Curate, A personal account of war & faith 1914-1918. Retired General Sir Peter de la Billière, who has endorsed the book, has quoted Field Marshal Haig adding; ‘A good chaplain is as valuable as a good general - and this book proves it.’

The Rev. Herbert B. Cowl C.F. M.C. considered himself no hero, but this is his story – one of many stories that had never been told before.  Let us hope that more stories regarding the Army Chaplains of the Great War will come into the public domain over the coming years. Their selfless courage must never be forgotten.