The First World War among the pyramids and fleshpots 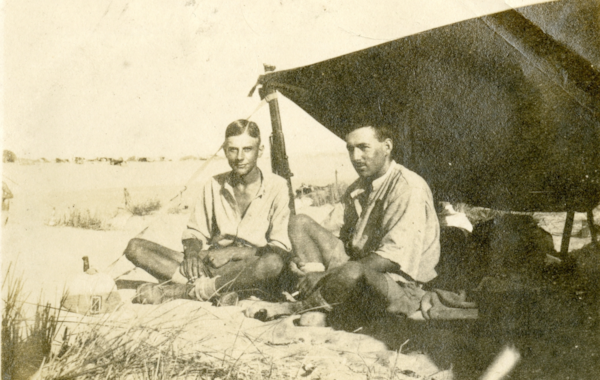 Stuart Hadaway explores the myth that the servicemen who served in World War I experienced an ‘easy war’ in comparison to their Western Front counterparts.

Did your ancestor serve in Egypt or Palestine during the First World War? Perhaps you have family stories about their time among the ‘pyramids and fleshpots’ of the exotic East, or one of those great photos of grinning men in shorts and pith helmets in front of the Sphinx and Great Pyramid at Giza. Or perhaps on their Medal Index Card there is a notation for ‘Egypt’, or the ‘4a’ and ‘4b’ that were used from January 1916. Or maybe you just know they served with the Egyptian Expeditionary Force (EEF).

If you did have someone out there, you may be forgiven for thinking that they had an easy war, far from the important fighting in France and Belgium. However, nothing could be further from the truth.

Far from an ‘easy war’, the men in Egypt and Palestine faced harsh conditions living in sweltering deserts or freezing mountains, rife with stomach complaints and malaria. They lived in isolated camps hundreds of miles from towns or cities, with only the most basic facilities and a constant shortage of water, food and entertainment for monotonous months or even years on end. When combat came, it was brutal and merciless against a formidable foe.

The campaigns in the Middle East are often portrayed as sideshows fought for political ends – the British and French taking advantage of the war to scoop up lucrative lands from the ailing Ottoman Empire. Again, nothing could be further from the truth. Britain and France were reluctant to fight the Ottomans. The Sultan of the Ottoman Empire was also the Caliph of Islam, and the fear of Muslim uprisings across the British and French Empires initially outweighed any other political gain.

However, practical and economic reasons soon came into play. While politics came to overshadow the campaigns, the whole reason the war came to Egypt in the first place was because of what the German Kaiser called the ‘jugular vein of the British Empire’: the Suez Canal.

The Suez Canal was the fastest route between the vast natural resources of the Far East and Britain’s expanding war economy. Britain would be constantly struggling to expand war production and keep up with or exceed demand, not always successfully. Without the speed and convenience of the Suez Canal, Britain’s entire war effort would have come to a grinding halt due to lack of basic resources.

Obviously the Ottomans and Germans knew this too, and all of the fighting in Egypt, Palestine and even later Syria and Jordan, was caused by the necessity to protect the Canal. One large scale attack had to be rebuffed in 1915, and two in 1916. Even in 1917, Britain’s advance on Jerusalem (captured in December 1917 at the end of arguably the most successful British offensive of the war so far) was a pre-emptive strike to stop an Ottoman force – over one third of their entire army – that was gathering to invade Egypt and cut the Canal in early 1918.

So if your ancestor served in the EEF, don’t just pass them by. They may have been far away and overlooked, but that’s even more reason why to pay them their dues now. They did more than just their bit for the war effort, and while the conditions they served in were very different to those endured on the Western Front, they were in no way less severe.

Stuart Hadaway is the author of several books on the First World War in the Middle East, published by The History Press and OGB Publishing. His most recent book, Tracing Your Great War Ancestors: Egypt and Palestine, has just been published by Pen & Sword Family History. He also runs the ‘Egyptian Expeditionary Force in WW1’ Facebook page.