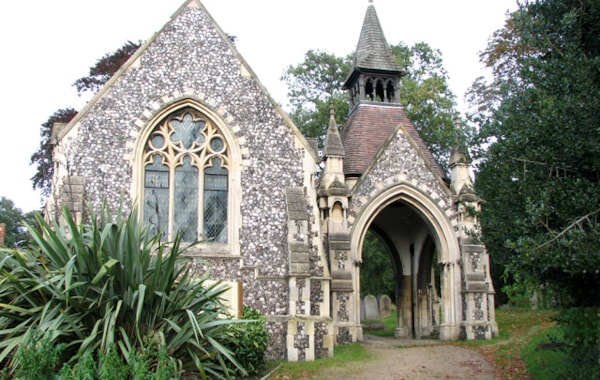 Burial records for Rosary and Earlham Cemeteries, comprising thousands of deaths in Norwich, have been added to the DeceasedOnline website.

This cemetery (pictured) was established by non-conformist minister Thomas Drummond in 1819, and was the UK's first non-denominational burial ground. In 2010, it was granted Grade II* listed status.

Burials here include train driver John Prior and fireman James Light, who were killed in the 1874 Thorpe rail accident at Thorpe St Andrew in Norfolk, in which the 20:40 mail train from Yarmouth and the 17:00 express from London collided head-on whilst travelling on a single track line between Norwich and Brundall.

In total the driver and firemen of both trains and 21 passengers were killed, and many more seriously injured. After the horrific accident, as a preventative measure, engineer Edward Tyler developed the tablet system, whereby a token is given to a train driver to be inserted into an electric interlocking device after travelling down a single track, in order to let a waiting oncoming train driver know that the track was now clear.

Earlham Cemetery opened in 1856 once officials began to realise the link between overflowing churchyards and disease outbreaks. In 1855, after a cholera outbreak a few years previously, the Mayor of Norwich received an order from the Home Secretary demanding that all burials in the city's churchyards ceased.

Once a site for the new municipal cemetery was chosen and purchased for £5000, Earlham Cemetery was designed by city surveyor Edward Everett Benest in an informal garden style with winding paths, and catering for all faiths. By the late 1920s the cemetery had been extended across Farrow Road to its present size of 85 acres.

Earlham Cemetery is the final resting place of Victorian and Edwardian architect, George Skipper, designer of the Royal Arcade in Norwich.

Also buried in Earlham is Erminio William Louis Marchesi, who founded the Round Table.

The records available comprise digital scans of a mix of burial, grave, and index registers, section maps showing the area in which the grave is located, and details of other occupants in the grave.