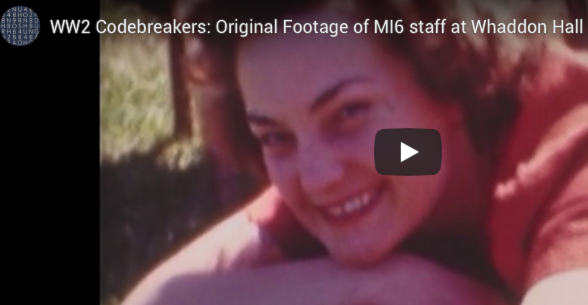 The reel of wartime footage, preserved in its original canister, has been donated to Bletchley Park by a donor who wishes to remain anonymous.

The film, shot mostly in black and white with some colour footage, shows men and women off duty at Whaddon Hall and at Whaddon Chase, where some staff were billeted. There is also footage of the Whaddon hunt, a football game, and a cricket match in beautiful summer sunshine.

Can you help identify people in the film?

Identified figures in the film include Brigadier Richard Gambier-Parry, Head of SIS Section VIII, based at Whaddon Hall 1939-1945, as well as Bob Hornby, first Engineer, in charge of workshops and Ewart Holden, Stores officer.

Several figures in the film have not been identified and Bletchley Park Trust is appealing for anyone who recognises someone in the film to get in touch via email.

Dr. David Kenyon, Research Historian at Bletchley Park highlights the rarity of this find: “No other film footage of a site intimately connected with Bletchley Park exists. We don’t know who filmed it and the footage doesn’t gives away any state secrets or any clues about the work the people in it are doing. If it fell into the wrong hands, it would have given little away, but for us today, it is an astonishing discovery and important record of one of the most secret and valuable aspects of Bletchley Park’s work.”

‘I’d never seen my father on a cinefilm before,’ said Mr Pidgeon. “I was very surprised and moved to watch it for the first time. It’s a remarkable find.”

What will happen to the film now?

The silent film has been analysed by a forensic lip reader, enabling subtitles to be added where possible to help bring it to life. The film will be preserved as part of Bletchley Park’s collections, and made accessible for research, when the museum and heritage attraction reopens.