The photograph is taken in 1940 and shows the medieval strip lynchets (earth terraces) in the fields. Most of these have been lost

When the Luftwaffe started to plan its prolonged assault on British cities in the early to mid 1930s, it created a unique historic record: the first aerial survey of many cities and landmarks.

Now a specialist collection of those German reconnaissance images, curated by the expert who wrote the book on the subject, are coming to auction at Ewbank’s in Surrey on 24 June.

Nigel Clarke, whose 2013 book Adolf’s British Holiday Snaps reveals the extent and importance of the reconnaissance photos, also explores the subject via his dedicated website.

“The German High Command had realised early in the war the importance of up-to-date aerial intelligence,” said Nigel. “The German army had developed the quick ‘blitzkrieg’ attack. This involved the rapid invasion of hostile countries using vast numbers of men and equipment. For the attack to work there was a need for accurate mapping and reconnaissance of landscape.”

Huge archive prepared in the 1930s and early 40s

Having begun preparations as early as 1930, the Luftwaffe had a huge archive of reconnaissance pictures by the time war finally broke out. 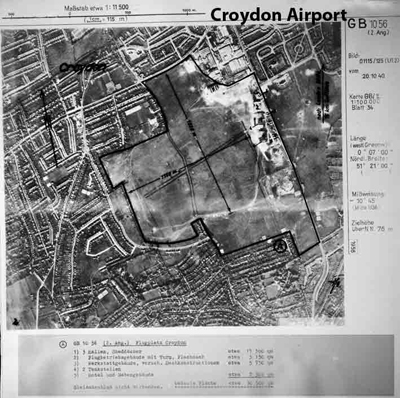 Croydon International Airport. Britain’s only international airport where Amy Johnson landed. This was soon put out of operation by major Luftwaffe bombing early in the war

“Each unit had its own photo-laboratory where film was developed, analysed, printed and distributed. A master set of prints were sent to the central intelligence archive at Zossen (12 miles south east of Berlin). The central archive at Zossen was destroyed by fire during fighting towards the last months of the war.”

Dramatic changes to the British landscape

Compared to today’s satellite images of the same place, the photographs taken between 1936 and 1943 show just how dramatic the changes to Britain in the post-war years have been.

Houses, new towns and urban sprawl have replaced a wide expanse of fields. The cities of Bristol and Birmingham have spread into large conurbations and once-distinctive boundaries have merged. Industry and shopping centres have migrated from the centres to the suburbs. 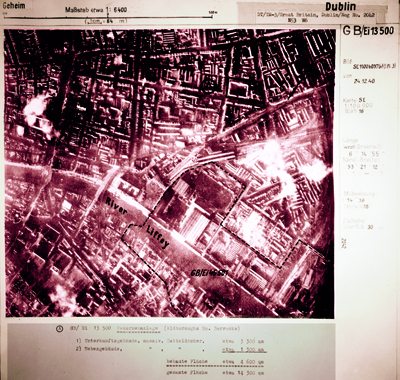 One of a series of Luftwaffe pictures marked up with targets despite Ireland's neutrality in WW2. Ireland was one of the few countries to send condolences to Germany on the death of Hitler

In the post-war period, field size expanded and countless miles of hedgerow disappeared. Vast areas of chalk downs and common land have been ploughed and huge areas of arable land created.

Find out more about the 24 June at the Eubanks Auctions website.