Get a taste of just some of the many occupations that Ad&egrave;le Emm covers in her new book, Tracing your Trade and Craftsmen A

Get a taste of just some of the many occupations that Adèle Emm covers in her new book, Tracing your Trade and Craftsmen Ancestors, out soon.

This is a photograph of my grandfather working on a train at Wolverton works, Buckinghamshire. By 1907, this was the largest coach building and repair works in Britain employing 4,500 men between 1900 and 1924. Family myth has my grandfather working on the royal train. My grandfather completed his Wolverton apprenticeship circa 1905 and I wonder if this photo was taken in celebration.  I love the flat cap!  I also wonder if this was one of the royal trains built at Wolverton in which case, the photo is a double whammy!

Several royal trains were built at Wolverton works and their records are held at the National Rail Museum Library in York.  The Wolverton archives were catalogued by Friends of the Museum and can be found on http://www.nrm.org.uk/~/media/Files/NRM/PDF/archiveslists2012/railwaycompanyworks/Introduction%20to%20Wolverton%20archive%20catalogue%20and%20archive%20list.pdf.  There is a search facility and some names are specifically mentioned. To see the actual archives, you must visit the museum; details are found on their website on www.nrm.org.uk/ResearchAndArchive.aspx.  Be warned, although there is a lot of it, not all archives survived; during World War 2, as part of a national paper salvage drive, some paper records were destroyed – an insurmountable problem for the family historian!

My favourite archives at the library were bound copies of CA Park’s 'Reports to the Locomotive Committee'. Park was the North Western’s Carriage Superintendent and each month he wrote a report which included sick-leave chitties with names, ages, how long the employee had worked for the railway, their salary and his recommendation for sick leave: an accident report including name, job title, what happened and how much the employee was to receive under the Compensation Act of 1897: a lost and found column for possessions left by travellers on the railways and stations (for all over the country), and a list of small scale shunts and train accidents and what happened also around the country wherever the London &North Western Railway ran trains.  Many names are recorded. 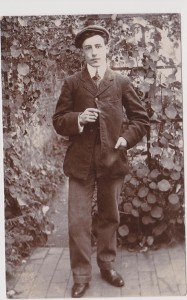 By 1910 Adèle's grandfather was employed on the coach works. © Adèle Emm

Dukinfield Carriage and Coach Works were constructed in 1909 and by July 1910 my grandfather had made the smoky journey north where ambulance trains were being built even though war was not  declared for another four years. His ambulance trains were destined to be shipped to the front line. Transported to the Continent on train ferries and cargo ships, family rumour has it that he was to travel to France with the train but stayed to work on the next one.  Apparently, (lucky for him but not those who went) the train sank en route. I must confess I have spent a lot of time investigating this story, so far failing to find any convincing answers except that three ambulance trains were built at Dukinfield. The first was in service in France by the 24 August 1914. The last, ambulance train No 63, built at Dukinfield for the Americans, was exhibited throughout the country from May 1918.  If any train had sunk on the crossing, it had to be the middle one.

What I do know is that my grandfather was an enthusiastic ‘ambulance man’. We have his St John Ambulance first aid voucher and medallion dated 1919. Page 364 of the Great Central Railway Journal May 1914 explains ambulance class rules. There had to be at least 30 people in the class and fees, textbooks and bandages were paid for by the employing company. Candidates took examinations achieving the St John Ambulance Certificate in the first examination, the ‘Voucher’ (like my grandfather’s) in the second year. Candidates gained the Silver Medallion from the third year with the added incentive of an extra day’s leave the year you passed and an additional local annual train pass for candidate, wife and dependent children.

For anyone whose ancestors worked for the Gorton or Dukinfield Great Central Railway, the London & North Eastern Railway Companies, The National Rail Museum holds photographs of the Dukinfield Carriage and Coach Works. More importantly, Manchester Central Library has index cards for those working there. The staff index cards (archive ref. GB124.A.GCR) are a fascinating record giving dates of birth, ‘staff reduction’ (redundancy to us), retirement and dates of death if the employee died in service.  Job designations are listed alongside the rates of pay and rises together with  recording accidents and injuries, It is possible to trace an entire work record through these cards.

Adèle Emm's book, Tracing your Trade and Craftsmen Ancestors will be published by Pen-and-Sword.co.uk on 30 April 2015. Come and listen to her talk on Friday 17 April (this morning!) at 10.15 on 'Social and working conditions of the clothing and allied trades; tailors, dressmakers, lace and button makers' at Who Do You Think You Are? Live. And on 30 May 2015 Adèle will be holding a half day course at the Society of Genealogists: http://www.sog.org.uk/books-courses/events-courses/tracing-your-trade-and-craftsman-ancestors.