Tracing women on your family tree Today, 8 March, is International Women's Day, and this Sunday, 10 March, is Mother's Day. So what better time to celebrate the women on our trees? Here Roy Stockdill looks at the possibilities of researching a direct line of your female ancestors.

It is a wise child that knows its own father. The origins of this traditional proverb have long been a matter for conjecture, but whatever the history of the old saying, it has always been a fascinating one for family historians, evoking as it does instances of illegitimacy and of cuckolded husbands wondering whether they were bringing up another man’s child or children.

In law, the child of a married woman is assumed to be her husband’s unless otherwise declared. But can we be sure that the man named on a birth certificate – and who you are so carefully researching – was always the actual biological father? Show me a family historian who can put his or her hand on heart and swear that there has never been in their family tree any instance of what the DNA experts call a non-paternity event and I will show you either a fibber or a gullible optimist!

In this article I am discussing the possibilities of researching and compiling an ancestral descent entirely in the female line, that is, your mother, your mother’s mother, your maternal grandmother’s mother and so on, a continuous line of descent from one woman to another for as far back and as many generations as you can achieve.

What, you may ask, would be the point when it is normally easier, and far more common, to follow male lines? Well, it would surely establish a bloodline about which there can be the minimum of doubt, for if we can’t believe in our female ancestors who can we believe in?

It is, after all, the women who bear children and apart from those (thankfully) extremely rare cases where there has been a hospital mix-up between two newborn babies, a mother always knows who her own natural child is, even if she’s telling fibs about the father! We may not know for certain who someone’s real father was, but if a woman gives birth to a child and this event is fully documented, then the mother’s identity cannot be in any doubt.

So how easy, or difficult, is it to research and construct a family pedigree following an entirely female line, which is known to genealogists as a matrilineal tree? I am not going to pretend it is as easy as researching male lines, but it certainly can be done. Ironically, in fact I have got my own matrilineal line – tentatively – farther back in both generations and time than my direct male line ancestry. But more of that later.

How are the research methodologies different? In essence and practice, not very much at all. To construct an entirely female pedigree, we research most of the same records that we do for male ancestors: civil registration births, marriages and deaths; the census returns; parish registers and indexes; other church records; wills; directories and electoral registers; monumental inscriptions; settlement and poor law records; newspapers and court cases and other available sources.

The best advice I can give to beginners is that which every book ever written on the subject tells you: start with yourself and work backwards, a generation at a time. Talk to your older female relatives, since in the majority of families it is invariably the women members who know more about the family history and are most curious about it.

The most obvious difference between researching male and female lines is that women usually change their names when they marry or become involved in a relationship, taking the name of their husband or partner. And some women change their names with irritating regularity – irritating, that is, to the researcher.

We may think women today change their names much more often than they once did, especially in these days of multiple marriages and relationships. However, author and family historian Margaret Ward, in her excellent book The Female Line: Researching your Female Ancestors (Countryside Books), cites a classic case from the 17th century in the parish burial registers of Great Amwell, Hertfordshire…

Elizabeth Wilkinson by birth, Elizabeth Sheafe by marriage, Elizabeth Davis by common forme, Elizabeth Chandler by usual appellation, neyther mayde, wife, nor widdowe, after an unquiete lyfe a languishing sicknesse and a desired death was buried the nyneth of Julye 1632.

Would I fancy researching her? Somehow, I think not! However, to give a modern example, I recently investigated the ancestry of a famous and wealthy male TV personality whose mother has borne at least four surnames in her lifetime. I am not naming her because she is still alive, now in her eighties, but she was born into one name, had a child in another, took a third as a stage name when she became a dancer and gained a fourth when she eventually married.

So what are the possibilities of tracing an all-female line of descent, given that the surname usually changes in each successive generation? Well, I am the proud possessor of one genealogical curiosity. I can trace my direct matrilineal line farther back in time, and through more generations, than Her Majesty Queen Elizabeth II! My matrilineal tree goes back nine generations to a 7x great-grandmother, Katherine Falkiner, who was baptised in 1670 at Hampsthwaite, a village near the spa town of Harrogate, Yorkshire, and who married John Stead there in 1701 at the parish church of St Thomas à Becket. There is a possible extra generation back in the person of one Jane Wilson who wed John Faulkiner [sic] in the adjacent parish of Ripley in 1668. However, I have not yet been able to prove that these were Katherine’s parents.

The ancestors of William Makepeace Thackeray, the celebrated novelist and author of Vanity Fair, came from Hampsthwaite and were living there in the 17th century at the same time as my forebears. Like most family historians, I occasionally suffer from delusions of grandeur and would love to find a connection to such a great literary figure, but so far I haven’t managed it!

My direct maternal ancestors were born at Hampsthwaite for several generations until my great-great-great-grandmother, Margaret Grange, who was born at Darley in the parish about 1798, moved a few miles to the town of Otley where she married William Moody, a shoemaker, in 1819. William and Margaret’s daughter, Sarah Moody, born at Otley about 1822, married my great-great-grandfather, Thomas Bradley, a railwayman, at Shipley, Bradford, in 1843 and from then onwards my ancestors were in that city until my birth in 1940. 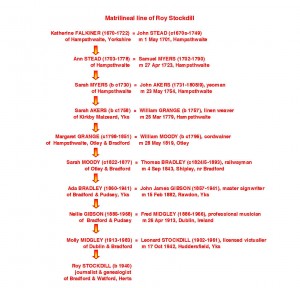 A chart of my direct matrilineal line can be seen here – and the eagle-eyed among you will have certainly spotted that my parents didn’t marry until a couple of years after I was born. Being one of those conscientious genealogists who believe in telling it like it is, warts and all, I never seek to hide unpalatable truths. Almost all of us have them in our family histories and I see no point in shrinking from the facts.

When I was born, my father was still legally married to his first wife but involved in a relationship with his secretary, my mother. They married when his divorce came through in 1942. At least I can be pretty sure that he was my father because he didn’t hide the fact, putting his name on my birth certificate when they jointly registered me. Given his then marital status, I doubt he would have done that if someone else had been my father, so we are back to my premise at the start of this article!

I mentioned that – probably somewhat unusually – I can trace my direct matrilineal line farther back than I can my direct male line. This is because, though I have been researching my family history for over 30 years, I am permanently stuck with my great-great-great-grandfather George Stockdale or Stockdill, who was born about 1718 but not in the same Yorkshire parish of Husthwaite, near Easingwold, in which he was married in 1756. Until – indeed, if ever – I can crack this particular brick wall, my male line ends there.

I also mentioned earlier that I can get my matrilineal line back farther than the Queen. Anthony Camp, former director of the Society of Genealogists (SoG), wrote in his book Everyone Has Roots (published in 1978) that her matrilineal descent had not been taken back beyond one Frances Webb of Oaksey, Wiltshire, who married Thomas Salisbury at Salisbury Cathedral in 1795. Frances Webb was the Queen’s matrilineal great-great-great-grandmother.

However, another SoG member, Edward G Davies, published an article in the society’s journal, Genealogists’ Magazine, in 2002 in which he stated that the mother of Frances Webb was one Mary Garritt, who married Francis Webb at Stanway, Gloucestershire, in 1769. 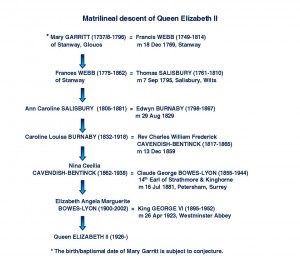 According to Camp, the longest known matrilineal line was that boasted by Queen Victoria, which went back 28 generations to one Erembourg, the wife of Gervase de Chateau-due-Loire in the 11th century.

Finally, in researching this article, I looked into a couple of other matrilineal lines of royals, Kate Middleton who married Prince William in April 2011 and became the Duchess of Cambridge, and Sarah Ferguson, the Duchess of York. The ancestry of Kate Middleton has been well documented in newspapers and on websites, probably the most comprehensive of which can be found at: www.wargs.com/royal/kate.html. In drawing a matrilineal tree for her, I should point out that I have not had the time or resources to check every link personally. However, her earliest traced maternal ancestor would appear to be an Elizabeth Dunn, born about 1660 who married Thomas Proud at Kirby-in-Cleveland, Yorkshire, in 1685.

Interestingly enough, the ancestors of Prince William’s wife came from fairly close to the area of Yorkshire where my own ancestors lived and were of a similar class background, ie rural labourers, but, again, I did not come across a link!

Perhaps the most interesting direct matrilineal line I found was that of Sarah, Duchess of York and the mother of Princesses Beatrice and Eugenie. I came across this on a CD of the genealogy of royal and noble families of Europe called Your Heritage: Your Family. Again, I have not checked every link personally, but it takes Sarah’s ancestry back 13 generations to a celebrated figure in history, Lady Anne Clifford (1590-1676) of Skipton Castle in Yorkshire. Lady Clifford, a redoubtable noblewoman of the Stuart era, spent much of her life fighting and feuding – with her own family, her two husbands, her tenants on her extensive estates in Yorkshire and Westmorland and with the Parliamentary troops of Oliver Cromwell who besieged Skipton Castle during the Civil War. She also fought a long legal battle to gain her inheritance and titles.

I wonder if I have enthused readers to try to trace their own direct matrilineal line as far back as they can? I do hope so.

This article first appeared in the Christmas 2011 issue of Family Tree. You can still download the issue in full right now! Family Tree is available as a digital edition – visit www.pocketmags.com, the App Store, Google Play or Amazon Appstore. Single issues, back issues and subscriptions are available for PC, Mac, eReaders, smartphones and tablets. A free sample is also available for all devices.