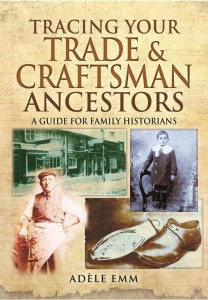 Tracing your Trade and Craftsmen Ancestors by Adèle Emm.

While working on her forthcoming book, Tracing your Trade and Craftsmen Ancestors, Adèle Emm came across all sorts of interesting occupation-related photos. Here she shares some of these vintage photos that cropped up in her research into her artisan ancestors... 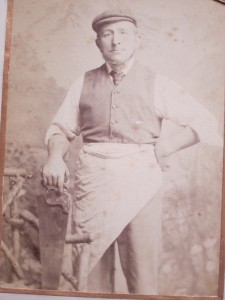 Craftsman mystery: do you know why this chap's apron was folded? © Adèle Emm

Does anyone know why his apron is folded?

Representing a carpenter/joiner/sawyer is the saw-wielding workman sporting a folded apron.  Who is he? I have no idea but he too is in the family album so was he friend or relation?  I sent his image to several experts but no-one could explain why the apron is folded in such a distinctive way; what is the significance? ‘He isn’t a mason,’ said a masonic friend. Do you know the answer? The photo is a cabinet print taken in Thorneycroft studio, Newport Pagnell, which, according to Buckinghamshire Family History website (www.bucksfhs.org.uk/index.php/buckshistory/131-general/1221-buckinghamshire-photographers-list-1864-1915) was run by George Walter Thorneycroft from 1899-1903 at 49 Tickford Street. Our chap looks to be in his thirties or forties so I guess he was born circa 1859; dating men by their clothes and hairstyle is notoriously difficult.  Obviously I didn’t find the right expert for his apron so if anyone knows why it was folded thus, please tell me! Please email Adèle Emm at [email protected]!

A fine example of a cooper's barrel. But perhaps this cheery Edwardian has had a little too much of a tipple? © Adèle Emm

Was this the perfect illustration?

I found the perfect illustration for the coopers’ craft in a postcard fair; a naughty 1912 boozy, top-hatted Edwardian slumped beside a triple X barrel. Originally, he was to grace the front cover but the soubriquet, ‘I am very fond of what I like’ was deemed to give the wrong impression so he was demoted.

Three trades in one

The young man perched on a studio photographer’s chair represents three trades; button/lace making and tailoring.  Dressed to the nines, he wears an overcoat with elaborate lace collar and fashionable metal military buttons. His shoes are black and highly polished and, like all small boys of his era, he’s wearing shorts.

The original photo is in my family album and, decades ago, my mother persuaded her father-in-law, my grandfather to name everyone - which is how I know this modish young man is Harry Mapley, my grandfather’s first cousin.  (Tip: do the same with your photos no matter how recent.) The Mapleys ran a prosperous bakery in Newport Pagnell, famous for hand-made lace although, by the time this photo was taken, the industry was virtually finished because of machine-made lace. The two boys grew up together.

Harry, born 1903, was the youngest of eight children and I reckon this photo was taken when he was about three. Unhappily, he died in 1930 aged 27 of asthema (sic) and pulmonary tuberculosis. He became a store keeper for a railway carriage works, probably Wolverton where my grandfather was apprenticed as coachbuilder (more on this in my next blog).  Horace, Harry’s brother, who registered the death eventually became PG Wodehouse’s ‘gentleman’s gentleman’.  Was Horace Jeeves’ template?

Adèle Emm's book, Tracing your Trade and Craftsmen Ancestors will be published by Pen-and-Sword.co.uk on 30 April 2015. Come and listen to her talk on Friday 17 April at 10.15 on 'Social and working conditions of the clothing and allied trades; tailors, dressmakers, lace and button makers' at Who Do You Think You Are? Live. And on 30 May 2015 Adèle will be holding a half day course at the Society of Genealogists: http://www.sog.org.uk/books-courses/events-courses/tracing-your-trade-and-craftsman-ancestors.