The tricky business of telling a true life story We aint got no drink, Pa

We Ain&#39;t Got No Drink, Pa: a tale of domestic hardship in interwar Bermondsey Delving in to family history is 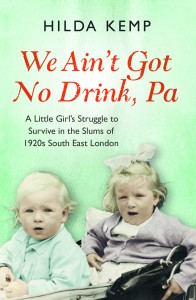 We Ain't Got No Drink, Pa: a tale of domestic hardship in interwar Bermondsey

Delving in to family history is a tricky business, as writer Cathryn Kemp knows only too well, having decided to tell the story of her grandmother’s childhood – years marked by extreme poverty, hardship and violence at the hands of Cathryn’s own great-grandfather. Cathryn tells us why she felt this was a true life story she really had to write…

I had promised my grandmother, Hilda, that I would, one day, write her story. It sounded such a straight-forward project, after all she’d always spoken in great detail about her extraordinary life. What could possibly go wrong?

Well, nothing went wrong, but instead I have found myself back in the heart of the family that I had little or no contact with for more than 10 years. It was a wonderful, and sometimes terrifying, experience. First of all there were the contradictions to untangle. One relative remembered events like that, another like this, while nan had been absolutely sure her version was correct. Then there were old family feuds to unravel and dissect, motives to guess at, secrets to expose. And exposing secrets is definitely a tricky business, there will be those who thank you as a writer, and those who will not.

In the end, writing We Ain’t Got No Drink, Pa was a process of remaining true to my grandmother’s memory, and memories. Hilda died in 2003, but she left her stories as her legacy to me and the rest of her grandchildren.

She was an ordinary woman, yet she had lived through extremes of hardship and poverty in the dockland slums of Bermondsey, South East London. Her father Ted Johnson was a wife-beater and a drunk, he worked as a casual docker and bare-knuckle fighter. Hilda’s life was poor, hard-working and hand-to-mouth as a result. And yet, hers is a tale of resilience and good humour, and, against all the odds, she survived to build her own life with my grandfather, based on love and decency.

I was very lucky to draw on the memories of my father, Little Albie (in the book), my great aunty Val, who is Hilda’s sister by Ted’s second marriage, and Hilda’s brother Ron, though the memoir is an oral history of nan’s words. The great happiness of writing the book was reconnecting with nan’s family, which of course, is my family too. It means a lot to me that my son Leon will grow up knowing them, and knowing his history through the book. But writing my nan’s story was not an easy task. Many scenes where she was beaten by her father as a child, or stayed up late to make him his dinner when she had to be up early for school, reduced me to tears. Hilda brought up her four siblings as her mother Emily’s right-hand woman. She cleaned, cooked, scrubbed floors and hung out washing from the age of seven, yet she never complained.

Her monstrous father Ted would lurch in from whichever drinking hole he’d spent their food money in, drunk and mean, demanding his dinner, whatever time of the night it was. And if he wasn’t satisfied, he’d throw the plate at the wall and reach for his belt, or throw his expert punches, battering Emily and Hilda. Today we’d call it domestic violence, and we’d hope that there were authorities or services to help women escape the particular type of cowardly bullying that goes on behind closed doors. But in those days, there was nothing a poor, working-class woman could do. There was nowhere to run to. No-one to help. And the daily beatings became normal life, both for Emily and Hilda, and many forgotten women and children in those bleak inter-war years.

Despite that, Hilda considered hers a rich life, living by the docklands, running free as a pack of wolves around the barges and wharves of the thriving docks. Her playground was the dockside, and it was a spice-scented paradise with large ships arriving to unload their foreign cargo, hundreds of workers hauling sacks of grains and rice, catcalling the children in a cacophony of sights and sounds.

Then wartime came. Nan dodged the bombs as the Blitz rained down on the docks, narrowly escaping with her life after a huge explosion that brought down the town hall in Spa Road, opposite her tenement housing. These days, we’d need several courses of therapy to come to terms with everything Hilda went through. She got up, dusted herself off, and carried on with her life as a Bermondsey biscuit girl at the Peek Frean factory and then working in a munitions factory in the Midlands where she met the love of her life. Nan was one of the lucky ones, her sweetheart came home from war and they married, though tragedy was to strike at the heart of their family 11 years later when their beloved daughter Brenda died. As a mother myself, I cannot imagine the pain that Hilda went through. I hope I never experience that particular agony, the pain that can never truly heal. This Mother’s Day, I will light a candle for nan, sending her my love and the love of my son Leon. She was an incredible woman, yet she was an ‘ordinary’ daughter, wife and mother. Her story is a tribute to all those women who kept home and hearth together during difficult times.

I hope I’ve done her justice. I had the slightly unnerving pleasure of hearing her voice in my head as I wrote our her verbal history, and I made sure I was as true to her as I could be. I realised how much I’ve missed her since she passed away, so this strange reconnection has been bitter-sweet. Ultimately, I knew I wanted her voice to be heard, her life to be recognized, and her triumphs and tragedies to be recorded, so that we never forget the extraordinary women who have shaped our lives today.

We Ain’t Got No Drink, Pa by Cathryn Kemp is published by Orion Books on 26 February in paperback and is also available as an ebook in 3 parts.