The Russian Revolution – a personal history Lisa Cooper provides a unique insight into the effects of the Russian Revolution, as she shares the story of her grandmother Pearl, who rode the railroads illegally to buy, sell and barter food during the famine that followed the Revolution.

Lisa Cooper provides a unique insight into the effects of the Russian Revolution, as she shares the story of her grandmother Pearl, who rode the railroads illegally to buy, sell and barter food during the famine that followed the Revolution.

The airwaves have been filled in recent weeks with the centenary of Russia’s Bolshevik Revolution. Lenin’s men seized power in October 1917 and the world’s first communist state was born. But the reality was not so simple. Across parts of the Russian Empire the revolution unleashed a brutal civil war and it was several years before the Bolsheviks consolidated power. One such area was the territory of present-day Ukraine, my ancestral home.

My grandmother, Pearl, was born into a Jewish family in the village of Pavoloch, near Kiev, and was 15 at the time of the revolution. Here the October Revolution gave way to anarchy, as newly formed ‘banda’ – as my grandmother called them – roamed the land. Some fought for Communism, others for Nationalism, Anarchism, Freedom or Holy Russia. The names of their leaders instilled fear: Petlyura, Makhno, Zeleny, Denikin.

In 1919 Pavoloch repeatedly became a sea of carnage as one banda after another passed through, stealing, raping, pillaging and killing. The White Army, under General Denikin, was the most ruthless of all. His professional soldiers were armed by western powers, including Britain, which wanted to see the Communists defeated.

The Whites hated the Communists, but more than anything else they hated the Jews. They barged into Jewish homes, drew their swords and cut inhabitants down regardless of age or sex. Anyone who tried to escape was shot in the back as they fled. They threw grenades into cellars, blowing up entire families; poured petrol over synagogues and set them alight; raped thousands of women.

One day five White Army soldiers burst into my family’s home. They searched the house for money, kicking down the door of the warehouse and smashing floorboards. One of the soldiers dealt my great-great grandfather a blow with his rifle butt and watched him crumple to the floor, then kicked him repeatedly in the stomach. They hustled the old man onto the table, pulled his scuffed leather belt from around his waist and forced his head into the noose they made with it. Then they hanged him from the meat hook on the kitchen ceiling.

After the soldiers left, the frayed old belt snapped in two and my great-great grandfather landed with an almighty thump on the hard stone floor. He had survived!

While the Civil War raged, food prices escalated, often by the day. It was difficult to keep track of how much produce should cost. By 1920 inflation was out of control, and finding enough food to feed a family was becoming a full-time occupation. My great-great grandfather was too old and weak by this time to continue providing for his family. Pearl’s parents were dead, leaving her grandparents with six orphaned children to care for.

Pearl took on the job of finding food to enable her grandparents, siblings and the rest of her household to survive. She undertook terrifying and dangerous journeys by train to markets across the area. These markets were illegal and she lived in fear of thieves who could steal her goods, or informants who might turn her in to the authorities.

It was several years before regular train services were to resume, there were no timetables and no carriages for passengers. Trains appeared whenever their cargoes of goods or troops were ready, which could mean passing the local station three times a day, or at other times three times a week. Sometimes they stopped at the station; more often they did not.

If the train didn’t stop, Pearl head to leap aboard while it was moving and cling on for dear life until she had a chance to find a better spot: on a footplate between carriages, on top of a freight car or in the corner of an empty wagon. She learned how to leap into the doorway of a freight car or even, if the train was travelling slowly enough, to crawl in between the wheels and work her way up to the carriage roof.

Jumping off was much worse than boarding the train in the first place. In winter deep drifts of snow lay either side of the train tracks creating a soft bed to land in. But in spring the embankments were piled high with blackened slush, towering over deep puddles.

Pearl learned on which days the towns and villages in the area held their markets. Every day she rode the railroads, buying and selling, bartering and exchanging, sometimes staying away from home overnight. Being very small, she was often able to hide in places where she could eavesdrop on the conversations of other travellers and gain useful insights or information. In this way, she eventually became a black-market gold dealer.

Her grandparents collected coins, rings, medals, jewellery – any gold that family, friends or acquaintances still had. All these were hidden in secret compartments sewn into her tattered coat. She took the gold hundreds of miles away, to Kharkiv. The trains here were of a different design and offered no means of climbing onto the roof, or even inside the carriages. Instead she perched on the wooden boards that ran across the wheel axles. Hands clawed at her and clung to her arms as other travellers piled on and held onto whatever they could to stop themselves from falling off.

Once in Kharkiv, Pearl met some shady dealers who led her away from the market to a deserted alley. They inspected her goods and handed over hard currency in return, which she hid in her secret pockets before stepping back into the market place. Had she been caught, she would have been shot on the spot.

Finally my grandmother found a way to escape from this terrifying life. Some distant relatives had emigrated from Russia around 1903 and ended up in Canada. In 1924 Pearl managed to join them, and over the course of the next year she raised enough money to bring the rest of her family to join her there.

Many, many people in the UK and elsewhere, in particular in the US and Israel, have a similar family history to mine. My grandmother’s story is by no means unique. But what is unusual is that her stories have been handed down through the generations. Two pieces of luck made this possible. Firstly, that my Grandma loved to talk about her past, unlike so many immigrants to the West, who chose to block out the atrocities that they lived through back in the ‘old country’. 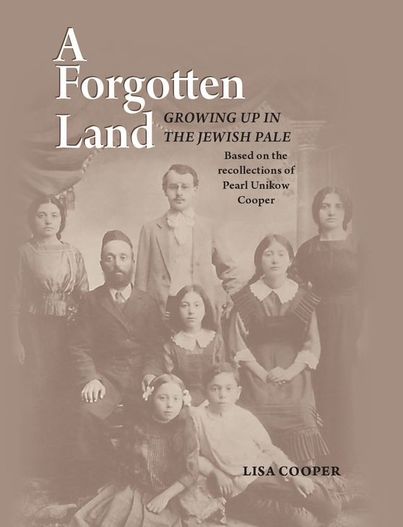 And secondly, in the 1970s, when Grandma was an old lady, my father made recordings – in Yiddish, the language of the Jews of Eastern Europe – of her telling stories about her life back in Russia. When my father reached his 70s, I asked him to translate them for me.

Hour after hour, Dad translated while I typed, transfixed. I had no idea what Grandma and her family had lived through, and how close they came to death on so many occasions.

I found it hard to equate the person recounting the stories with the old woman I had known as Grandma. She was a tiny, fragile, stooped old lady with walnut-wrinkled skin, I couldn’t imagine how she could have endured such physical hardship. And of course, had she not survived, I would not be here.

Lisa Cooper’s book, A Forgotten Land (Penina Press) is based on the recordings of her grandmother’s stories. Visit Lisa's website.