If you&rsquo;re interested in tracing your tree into the distant past, don&rsquo;t miss our latest issue, as Family Tre

If you’re interested in tracing your tree into the distant past, don’t miss our latest issue, as Family Tree assistant editor Karen Clare presents a Christmas box of delights...

It seems only a couple of years ago that DNA research was first applied in any meaningful way to genealogy as a hobby. Many of us were pretty mystified by it all. It was expensive, a bit too scientific for us ordinary folk to get our heads around, and not only that – we had no idea what use the results were, or what to do with them, when we got them.

How times have changed. DNA and family history research are now inextricably linked. As genetic testing has become more advanced, it has also become more commonplace among genealogists. Dedicated databases such as Family Tree DNA are reaching out and finding new cousins across the globe. Plus, thank goodness, the science bods are realising that the codes are rather a headache to the layman and woman – and they are being simplified. Hopefully, one day, we can all find out how we’re related in a single glance. Or, like our expert author Anthony Adolph, who has written an excellent feature in our Christmas issue explaining just how genetics can now help us grow our trees further back than ever before, we may find we have distant cousins we never even dreamt of. Incredibly, Anthony discovered that he is related to Ötzi, a Stone Age man whose frozen body was found preserved in ice in the Ötztal Alps between Italy and Austria in 1991. Ötzi walked the earth around 3,300 BC so, as you can imagine, this is quite a feat (if you excuse the pun).

So, if you want to find out more about Anthony’s remarkable tale, and get to grips with the very latest advances in genetic genealogy – without your brain going into meltdown – don’t miss this issue, it’s a fascinating read.

The Victorians are coming! 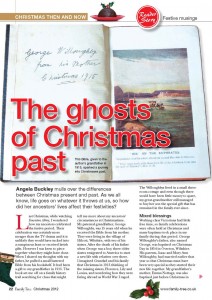 Ok, ok, so this title doesn’t have quite the same ring to it as ‘the iceman cometh’, but you can’t blame me for trying. In truth, the Victorians have been and gone, and some time ago too, for that matter. So why are we so obsessed with them still, especially at this time of year? I blame that Charles Dickens, and Queen Victoria and Prince Albert and, as Chris Paton explains in our Christmas issue, the media at the time (and now, for that matter). Our traditional idea of festivities, like Christmas shopping (bah humbug) is hard to escape, as we settle down in front of the telly to watch another rerun of ‘Oliver Twist’. But is our idea of the Victorians accurate? Find out what Christmases were really like for our ancestors as Chris examines ‘the Dickens effect’ while reader Angela Buckley examines her own family’s lives at Yuletide. Let’s just hope our descendants don’t think ‘EastEnders’ truly represented a 21st-century Christmas. Whatever you are doing over the festive season, don’t forget it is a great time to delve into the past. And eat mince pies. Merry ancestor-hunting!