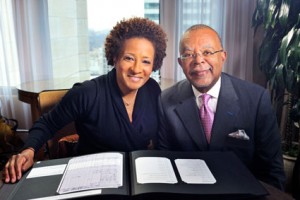 ‘3rd July 1960,’ said Dr Henry Louis Gates Jr. ‘It’s rare that you can give the date you fell in love with genealogy, but I’ve been in love with it since I was nine – on the day we buried my grandfather.'

Dr Gates hasn’t lost his fascination with his heritage over the years since, and has dedicated much of his professional life to researching and gaining an understanding of the family histories of the people of America, brought to the TV in series such as ‘African American Lives’ and ‘Faces of America’. And now his latest series, ‘Finding Your Roots’, is due to be launched in the UK.

‘Finding Your Roots’ is a 10-part series, which unearths the genealogical journeys of 25 American celebrities, from Samuel L Jackson, to Condoleezza Rice, Martha Stewart to Robert Downey Jr, and many other public figures. The show combines genealogy research with genetics, so, once the paper trail has ended, the extensive use of DNA testing can take the family history further back in time.

‘We have the finest genetic scientists in the world, scholars at Harvard and Massachusetts Institute of Technology,’ explained Dr Gates, ‘and we’ve sequenced entire genomes.’ Such cutting-edge testing, the show reveals, allows genetic matches and genealogical connections to be made, not just to vast haplogroups going back many tens of thousands of years, but also much closer in time – matching cousins and finding kin within the past three centuries.

So are the discoveries, both those found in the archives and in the laboratory, surprising, and how do the guests take them? It could, conceivably, be unsettling to discover that long-held views about your ancestry are not quite as you’d imagined.

‘Everybody is surprised at what we find, and many of our guests are moved to tears.' And this is something that Dr Gates understands. ‘I thought I knew quite a lot about my own family, but when the genealogist, Johni Cerny, did my research for “African American Lives” I was completely astonished.’

It turns out that Dr Gates inherits his Y-chromosome from a man with the Ui Neill haplotype, meaning that this ancestral line goes back to Ireland. While on his mother’s side, via the mt-DNA line, he’s descended from a white indentured servant who came from Britain or Ireland. This means that he is descended from a white man on his father’s father’s line, and a white woman on his mother’s mother’s line. Even more surprising, his admixture reveals that he is 50-50 African and European, which came as quite a shock. Dr Gates’s DNA results were ground-breaking too, as he explains, ‘When we featured the whole genome sequencing of my father and me, it was a double first: the first father and son, and the first African Americans, ever fully sequenced. I am very proud of that.’

But the DNA tests used on the show provide much more comprehensive genetic results too, to provide a fuller picture of the guests’ genetic inheritance. These are autosomal tests, which provide results that show the genes inherited from all branches of the family tree, just like a good old-fashioned paper pedigree chart.

So, in a skilled blend of thorough genealogical research and genetic testing, Dr Gates explores the family histories of the guests on ‘Finding Your Roots’ back through traditional archival routes, and beyond to find out where they really came from, as well as making connections in more recent generations too. Discover where genealogy research is heading…