Royal weddings through the centuries When Meghan Markle steps into St George’s Chapel Windsor on 19 May, she will enter the very heart of the British monarchy. Not only will she be met by the current members of the Royal Family, she will also be surrounded by the ghosts of monarchs past.

The Chapel was built in the fifteenth century by King Edward IV, the father of the little princes murdered by their uncle Richard III, and he was laid to rest there in 1483. His grandson King Henry VIII is also buried there, alongside his beloved third wife Jane Seymour.

As Meghan looks up, she will see Queen Katherine’s Closet, the small balcony built for Katherine of Aragon, from which Queen Victoria watched her eldest son Bertie (the future Edward VII) marry Princess Alexandra. The hand of history will lie heavy on her shoulder.

Windsor Castle has been the setting of royal weddings for nearly a thousand years. The first King of England to be married there was Prince Harry’s namesake Henry I, the son of William the Conqueror, in 1121. During the nineteenth century St George’s Chapel served as the regular venue for royal weddings. This suited Queen Victoria, ‘the Widow of Windsor’, who withdrew from public life after the death of Prince Albert, and hated going to London. It was not until the twentieth century that the more public setting of Westminster Abbey became the norm.

As a successful actress and an established media star, Meghan Markle is at least well prepared for her new role as a royal princess. The same could not be said of Princess Diana, who, from being a twenty-year-old kindergarten assistant was catapulted into the full glare of global media attention when she married Prince Charles in 1981.

The wedding was held in St Paul’s Cathedral, a venue even grander than Westminster Abbey, and everything about it was larger than life. Dubbed the ‘Wedding of the Century’, there were 3,500 guests, and the ceremony was watched by an estimated global audience of 750 million. Diana’s wedding train was so long that on the way to St Paul’s it barely fitted into her carriage. The wedding cake was five feet tall and weighed 225 pounds. In retrospect the fairytale wedding atmosphere raised impossibly high expectations of Charles and Diana’s marriage, which were brutally dashed within a few short years.

Roots of the royal family

It is often said that the Royal Family is really German, but if that was true in the eighteenth century, it certainly is not true today. In fact the Queen is half-Scottish: her mother, Queen Elizabeth the Queen Mother, was the daughter of the 14th Earl of Strathmore, and she grew up at the historic castle of Glamis in Angus. Prince Albert, the future King George VI, had to propose several times before she would accept him; they were finally married in April 1923. 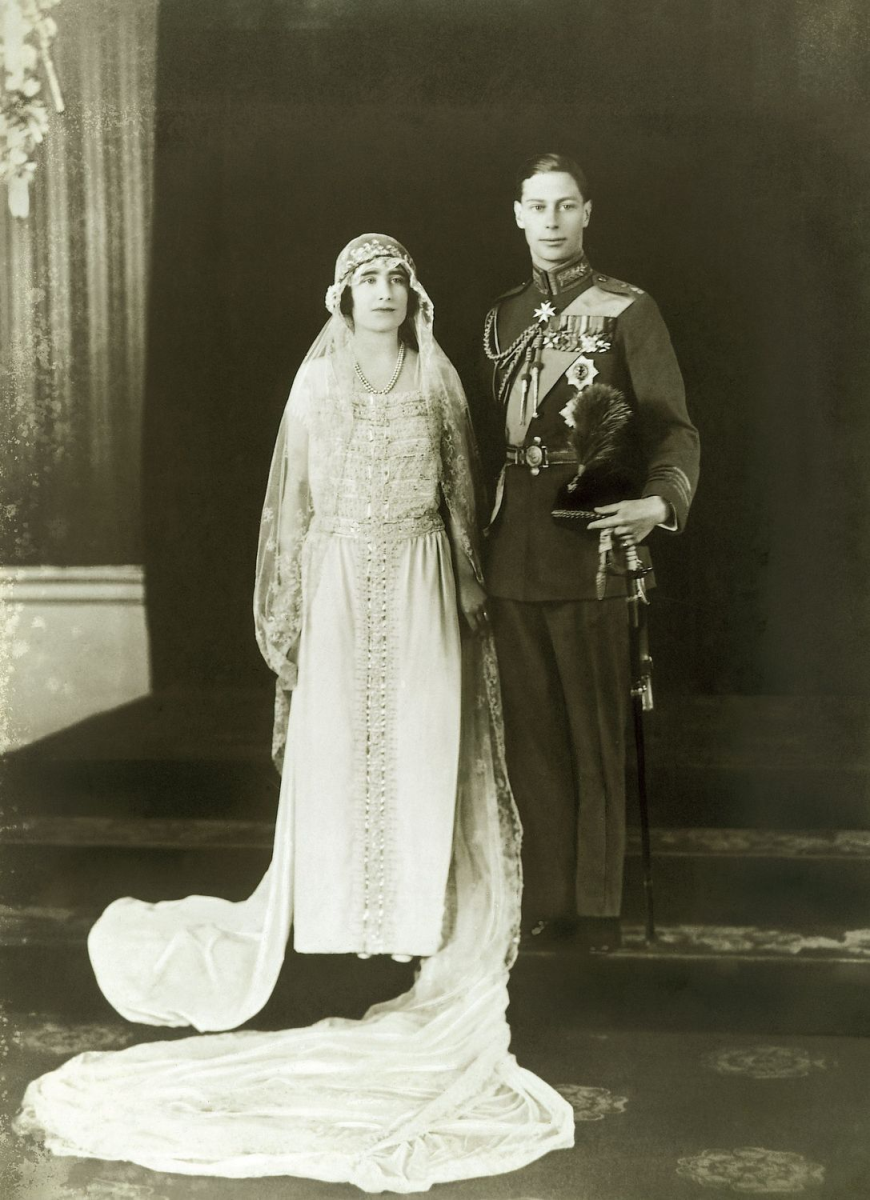 It was one of the first royal weddings after the First World War, and in a break with Victorian tradition of private marriages at Windsor, it took place in Westminster Abbey. It was very much a public event, designed to lift the morale of the nation after the horrors of the War. An estimated one million spectators lined the processional route, and for the first time the proceedings were filmed for the newsreels. The service was not broadcast on the radio, however, because the Archbishop was afraid that listeners might hear it while drinking in pubs!

As Elizabeth entered the Abbey with her father, one of the clergymen in front of them fainted. While the procession paused for a moment, she suddenly stooped down, and laid her bouquet of white roses on the Tomb of the Unknown Warrior, which had recently been installed in the Abbey.

This moving and unexpected gesture, which commemorated her brother Fergus, who had been killed at the Battle of Loos in 1915, showed Elizabeth’s empathy and her sense of occasion which was to serve her so well as Queen. In doing so she established a tradition which continues to this day. After her wedding, Meghan will go to Westminster Abbey to lay her bouquet on the Tomb.

The wedding of Princess Elizabeth and Prince Philip of Greece twenty-four years later was also designed to raise public morale in a post-war atmosphere of gloom and austerity. They were married on a cold, foggy day in November 1947.

Rationing was still in force, and well-wishers from America sent tins of pineapple chunks for the wedding breakfast, while Australian Girl Guides provided the sugar for the wedding cake. Elizabeth had to be given an extra allocation of clothing coupons for her wedding dress. Nevertheless the couturier Norman Hartnell managed to design something beautiful: an ivory silk gown sewn with 10,000 seed pearls imported from America.

The British public remained rather suspicious of Prince Philip. He was still regarded as a foreigner, even though he had been to school in Scotland, and had served in the Royal Navy during the Second World War. His German relatives were not invited, and he was given a British makeover. He took the surname Mountbatten, and King George made him a Knight of the Garter and gave him the title of Duke of Edinburgh. On the day he wore his Royal Navy uniform and ceremonial sword, and looked every inch the consort of the future Queen.

The vast majority of royal marriages have of course taken place either in London or Windsor, but if you are looking for a good trivia question on Scottish history, you could ask who was the last monarch to be married in Scotland? The answer, surprisingly, is Mary Queen of Scots, whose marriages to Darnley and Bothwell both took place at Holyrood.

King James VI was married to his queen Anne of Denmark, not in Edinburgh but in Oslo (then ruled by the Danish kings). Following a proxy marriage, Anne had sailed for Scotland, but was beaten back by violent storms. Alarmed by the news, James set out from Leith with a large retinue to fetch his bride himself. He arrived in Oslo in November 1589, and showed his ardour by meeting Anne straight off the boat, “with boots and all...kissing her in the Scottish fashion”. This was not a head butt, but simply a kiss in public!

Another famous overseas wedding was the marriage of the Duke of Windsor, formerly King Edward VIII, to Wallis Simpson in June 1937. Having abdicated the throne the previous year, Edward was an exile from Britain. The couple were married at the Chateau de Candé in France, a mansion owned by a shady American millionaire called Charles Bédaux. It was a rather sad occasion. None of Edward’s family was there, as the new King, George VI, had banned them from attending.

The wedding guests were greatly outnumbered by the reporters clamouring outside the chateau gates. They were married by an eccentric Church of England priest who subsequently went on a lecture tour of the United States giving audiences the inside story of the wedding! The photographs show Edward looking radiantly happy; Wallis, by contrast, looks pinched and drawn, pencil-thin in her blue silk wedding gown.

What does the future hold?

How will Harry and Meghan’s day compare with the wedding of the Duke and Duchess of Cambridge in 2011? All the signs are that it will be a more relaxed, informal occasion, and that it will reflect more closely their own interests and friendships. William and Kate’s marriage was a great State ceremony, and it was attended by royalty, presidents and prime ministers from all over the world.

As befits the nuptials of an American woman and British man, Harry and Meghan’s day will be a truly international event. The address is to be given by the head of the Episcopalian Church in the USA, Michael Curry. With fewer constraints on the guest-list, the congregation is likely to be more representative of modern British society as a whole.

As she watches the service from the front row, the Queen will no doubt remember her own wedding day more than seventy years ago. She will perhaps wonder at the changes that the monarchy has undergone in her lifetime and continues to go through, as a new generation of Royals steps into the limelight.

Ted Powell is a historian and author. His forthcoming book King Edward VIII: An American Life, is available to pre-order from Oxford University Press now, priced at £25 in hardback and ebook.