Every issue family history photo-dating expert Jayne Shrimpton casts her knowledgeable eye over pictures that Family Tree readers have sent in. Unfortunately we do receive a huge number of photo-dating queries, and just can’t squeeze them all into Family Tree, so please find two Family Tree readers’ photos and Jayne’s insightful answers below. You never know – the clues she gives may help you date family pictures of your own. Enjoy!

Q I have a couple of family photos taken at the turn of the century which I would like to date in order to establish the identity of two women in photo number 2. Photo number 1 depicts my great-great-grandparents Samuel Morris (b.1851) and his wife Elizabeth (née Vickress, b. 1846). It was taken outside their cottage in Ivington, Herefordshire, where Samuel died aged 58 of "diabetes and gangrene" on 23 July 1909. Elizabeth survived him for a good many years and died herself in 1932. Photo number 2 was taken at the same location and again shows Samuel and Elizabeth seated, only now Elizabeth seems to be wearing more formal clothes than in the previous shot. I do not know who the three people behind them are, but the two ladies are definitely not the couple's two daughters, nor their young adoptive daughter. The man in the middle is more of a mystery, as I only have pictures of the couple's first-born son, which is why I think he may be their second, William. I suspect the picture may have been taken to mark his engagement to Emily Price, whom he married in the last quarter of 1909, the same year Samuel Morris passed away. If this is so, Samuel would have died just months or even weeks before his younger son's wedding. I would like to know whether the first picture pre-dates the second, and whether the second can be dated as having been taken at the time William Morris may have become engaged to Emily Price. 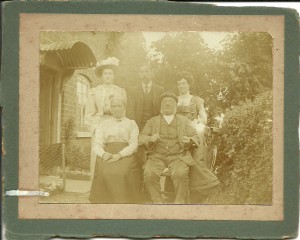 A Photograph 1 is the more difficult of these two images to date closely, mainly because we only see elderly subjects here (whose dress is less fashionable than that of younger folk) and also because Elizabeth is not smartly-dressed, but wears her everyday work wear, which presents a rather ‘timeless’ effect. She is dressed in the usual blouse and skirt of the Edwardian era, but her hemline is shortened for domestic chores, she still has her apron on over her skirt and her blouse sleeves are rolled up, as if she has just popped outside from the kitchen. Obviously this photograph must pre-date Samuel’s death in July 1909, but I’m afraid that with the limited visual evidence here, it isn’t possible to suggest a closer date than c.1901-09. That said, I suspect it was taken within a few years of No.2 as Elizabeth and Samuel appear similar facially in each image.

Photograph 2 is the more formal of these two scenes: as you say, everyone here is more ‘dressed up’ for the photograph, which certainly suggests a special occasion. The appearance of the two fashionable younger women at the back, especially the distinctive bodice style seen on the right and the hat on the left, provides a firm time frame of c.1905-09 for this photograph. This date range means that you may be correct in your suggestion that this photograph connects to the 1909 engagement of William and Emily, shortly before Samuel died.

Q I would be grateful if you could date these two photographs please. Photo 1 is of my 3 x great-grandmother, Emma Susannah Joslin (née Poulter), b.1829 in Romford, Essex, and three of her four daughters - Emma (b.1863), Catherine (b.1865) and Fanny (b.1867). As Emma’s youngest daughter and one of her sons died during 1889, I am wondering if the photograph was taken after this time. Emma lived in Ingatestone, Essex, before moving to Southampton between the 1891 & 1901 Censuses to be closer to her daughters. I have two possibilities for the identity of the couple in photo 2. They may be my 3 x great-grandparents, John Joslin (1831-1877) & Emma Susannah Poulter (1829-1925), who married 1855 in Chelmsford, Essex. Alternatively, they could be my 2 x great-grandparents, John Henry Joslin (b.1859 Fryerning, Essex) and Emily Wescombe (b.1868 Upper Sturt, SA), married 1885 in Upper Sturt, South Australia. John & Emily returned to the UK with their three young daughters to visit the Joslin family in late 1889. Their fourth child, a son, was born in London in December 1890. They returned to South Australia sometime in 1891/92. 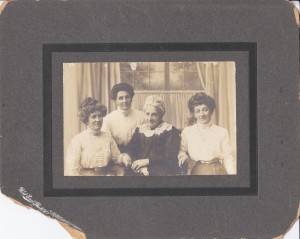 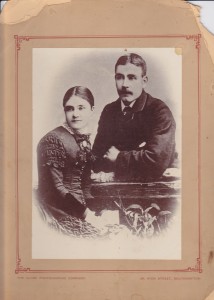 A Your assumption about Photo 1 I'm certain is correct. Your 3 x great-grandmother is very conservatively dressed in a formal dark gown ornamented with a lace collar and decorative, old-fashioned day cap that many ladies had abandoned by the end of the Victorian era. Her three daughters look very much more fashionable and are dressed according to the styles of the early 20th century. Their high-necked blouses and full hairstyles suggest a time frame of broadly around 1900-07. So this photograph definitely post-dates the deaths of their brother and sister in 1889 and fits in well with your mention that Emma was living near to her daughters in Southampton by the 1901 Census.

Photo 2 presents more of a mystery. The fashionable silk and velvet outfit shaped by the elongated cuirass bodice worn by the young lady dates this double portrait firmly to the period c.1877-83. It could well be a wedding photograph, but I’m afraid that the time frame means the image cannot represent either of the two marriages that you suggest. However, perhaps the couple could be your 2 x great-grandparents John and Emily, photographed at around the time of their engagement: hopefully you will know whether they were likely to have been in Southampton in the late-1870s or early-1880s, before their marriage in South Africa. If not, then in view of the firm Southampton location, this must be another couple from that area of the country.