Every issue family history photo-dating expert Jayne Shrimpton casts her knowledgeable eye over pictures that Family Tree readers have sent in. Unfortunately we do receive a huge number of photo-dating queries, and just can’t squeeze them all into Family Tree, so please find a selection of Family Tree readers’ photos and Jayne’s insightful answers below. You never know – the clues she gives may help you date family pictures of your own. Enjoy! 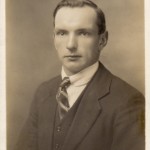 Q Please could you help me date the attached photo? I do not know who the person in the photo is but I believe it could be my great-grandmother's brother, Ernest Redhead, born 1893 and died in June 1917 during World War I. I only have one photo that is known to be Ernest Redhead taken in 1915 and I have attached that photo. Any help you could give on dating the photo and thoughts as to whether he could be one of the same people pictured in the other photo would be a great help.

A It can be difficult to date male portraits very precisely, especially in short views such as this. The soft collar worn by the young man indicates a date at least during World War I, or afterwards, when the modern un-starched shirt collar became more usual for everyday wear, especially among younger men. So this photograph could just about represent Ernest, if it was taken by 1917. 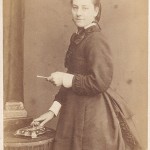 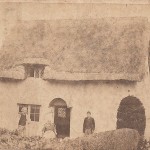 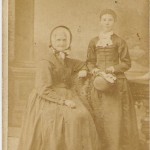 Q I wonder if you could date these three photographs for me please. The first one might be my 3x great-grandmother, Ellen Morris, born in the mid 1820s and passed away in 1912. Because of her long features, the younger woman standing next to her vaguely resembles my great-grandmother Elizabeth Allen, Ellen’s granddaughter, but as she was born in 1879 I think she may have been born too late. Perhaps she is Ellen's daughter Mary, born in 1867 (photograph number 3). The second photograph is supposed to depict Ellen Morris and her husband Samuel (1823-1897) in front of the family cottage in Eardisland, Herefordshire. Would it be possible to date this? The young man to the right is very possibly their youngest son Richard Thomas (b1860). The last photograph might be of Ellen and Samuel’s youngest daughter Mary, who was born in 1867 in Kinnersley, Herefordshire. I would like to know when the picture may have been taken and whether it could fit Mary’s age at the time.

A The first photograph looks to represent two ancestors of very different ages - possibly great-grandmother and great-granddaughter, or otherwise grandmother and granddaughter. Neither wears ordinary adult fashions, but this photograph appears to date from the 1860s. Therefore you will need to go further back than Ellen Morris to identify the elderly lady, who was probably born in the late-18th century, and the girl or young woman must also be an earlier ancestor than Elizabeth or Mary.

The second photograph, taken outdoors is hard to date accurately as the figures are so small. As far as I can tell, it probably dates from the 1890s or early-1900s, so it could possibly include Ellen and Samuel, although I can't be absolutely certain of the time frame.

The third photograph is closely datable to c1870-75. I'm afraid that the young woman can't be Mary (born 1867), as thought. However, at least with a firm date range for this and photo No.1 you can begin to consider possible identities from your family tree. 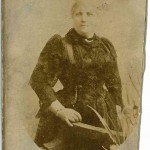 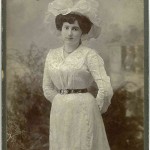 Q I have two photographs that I would love to identify, passed to my father by his sister-in-law when his brother died. The two ladies are too old to be of my grandparents' generation, or of that of my great-grandparents I believe - both my paternal great-grandmothers were born around 1892.  Perhaps these photographs belong to a generation further back? I only have scans of the front but I recall that the originals of both were totally blank on the reverse. They are both on very thick, stiff card. Apart from a Lithuanian branch, all of my ancestors were from London, but the studio is not identified anywhere on these photos to give any clues. Most of the family was working class, but these images strike me as being of quite fashionable and therefore slightly better off folk?

A Sometimes even ordinary working ancestors can look surprisingly well-dressed in old photographs: young people, especially, were often keen on following fashion and may have spent a large proportion of their income on clothes. These two photographs do show fine-looking garments, and this may possibly suggest that these ladies were more affluent than you imagined, but I wouldn't rule out some of the 2x or 3x great-grandmothers that you had in mind.

The earliest of the two is the photo of the older lady in dark clothing. The style of her garments, especially her sleeve shape, suggests a date in the early-1890s. The photograph of the younger lady is later - an Edwardian image. Her neckline is rather unusual, but the date will almost certainly fall between 1901 and 1911. She may therefore be an ancestor from a later generation than the lady seen in the first photograph. 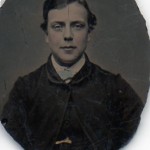 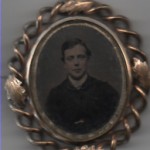 Q This photo was found in my mother's effects, and I suspect that it might be my great-grandfather, Charles Collins, 1834-1910, who was a butler born in Hayes, Kent but who is found employed in London on various census records. It is painted on glass (the back is black) and is shown in a gold-leaf framed brooch as you see.

A From both your description of this picture as an image on glass and from its appearance here, I would suggest that this is an early photograph called an ambrotype that has been cut down at some stage to fit inside a commemorative brooch. Most surviving British ambrotypes taken in the photographer's studio (as opposed to outdoor versions) date from within a fairly narrow time frame - c1854/5-early 1860s. From what little we can see of the young man's garments here, his portrait corresponds with that kind of date range, confirming that he could well be your ancestor, Charles Collins. 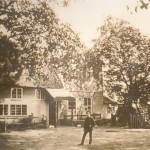 Q I don't know whether you will be able to help me date this photograph, as I appreciate that male attire is not very easy to date, and the female to the side is not very distinct. This photograph is of the Ram Inn at Brundall near Norwich. My 3x  great-grandfather, William Harper, was landlord there 1845-1856, and my 2x great-grandfather, John Harper, was landlord 1858-1889. It would be helpful if you could say whether this photograph is likely to have been taken before 1889, as then it is possible that the young man could be one of John's six sons born between 1845 and 1859.

A To accurately date outdoor scenes including people, like this photograph, we need to be able to at least see the main shape of their garments fairly clearly. I'm afraid that in this instance the figures are very small and indistinct and I can't see the dress details well enough to be certain of the date range here. However, with a few exceptions, most photographs in family collections that are set outdoors date from at least the late-1870s or 1880s onwards, as by then new photographic methods and equipment were available, making it easier for photographers to work outside. So, although the image is unclear, evidence suggests that this photograph was probably taken while John Harper was landlord (1858-89) and that the young man may be one of his sons. 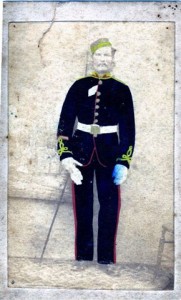 Q No one knows who is in this photograph, found among my husband's family photographs. The picture is mounted on card measuring 2 1/2 ins x 4 ins. There is something unnatural about the picture. My husband thinks it is a fairground shot of a head through a hole. Certainly the head and feet seem not to belong to the body, and the uniform is undoubtedly painted. There is nothing on the back of the card, so no clues. If you could help me with a date and explanation, it might clear up a mystery.

A Judging from its appearance and from your description, this is a small carte de visite photograph, whose dimensions were the standard size that you measured (see also my Cartomania article in FT December 2011). Sometimes cartes (cdvs) were retouched by hand, using water colour paint, to add depth, interest and create a more attractive portrait. I think what has happened here is that the coloured areas, which have survived in good condition, are very pronounced - too heavy, really - while the remaining un-painted photographic areas have faded a great deal, creating a striking contrast between different parts of the picture and resulting in a rather bizarre image in which the head looks disembodied from the figure and in which the feet also appear cut off! This is a genuine photograph, however, and I would estimate a date in the 1860s or thereabouts. I believe this ancestor is wearing military uniform and a military expert may be able to positively identify it for you. 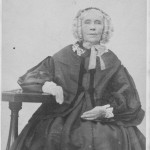 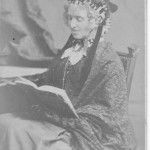 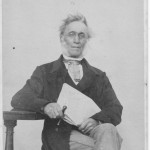 Q I am compiling a book about my wife's ancestors, Thomas Allsop (1795-1880), who appears in the DNB, and his wife, Anna (1795-1876), née Matthews. I don't have any photographs known to definitely represent the couple, but wonder if these three photographs may be of the right era. The photo by Elliott & Fry in fact does have a pencil note on the back - 'Grandma Allsop' - and I feel sure this must be Anna in middle age. Please could you establish from the styles of dress whether the other two photos may have been taken around 1870, when the couple were in old age.

A Because your ancestors were born in the late-18th century, they would have been at least middle-aged or elderly when first pictured in a photograph, for photography did not become popular with many people until the later 1850s and 1860s. The photograph by Elliott and Fry has to date from at least from at least 1863, when their business was first recorded at the address on the mount. From what I can see of the lady's dress beneath her shawl, the date here will be mid-late 1860s or early 1870s.

The remaining photos seem to be a pair, judging from the identical table in each. In their close-up composition, they look like very early daguerreotype or ambrotype photographs, but I presume they are on card and the lady's outfit is definitely that of the 1860s. Therefore the couple could theoretically be Thomas and Anna, although I am not sure whether the lady is the same person as in the Elliott & Fry photograph.