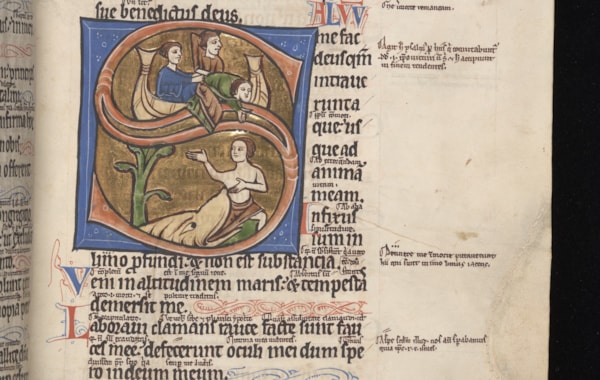 A 13th-century illuminated manuscript that has been in St John’s College, University of Cambridge, for nearly 400 years has been digitised so it can reach a worldwide audience.

Detailed images from the early medieval religious text have been published online for the first time in the University of Cambridge Digital Library.

The 377-page manuscript is a psalter that belonged to Robert de Lindsay who was Abbot of Peterborough from 1214 to 1222. Psalters were some of the most common medieval religious texts known as devotionals. They typically contained the Old Testament Book of Psalms, together with other liturgical and devotional material such as a calendar, canticles, litany and prayers.

‘Manuscript (MS) D.6’ was given to St John’s College in 1635 by Thomas Wriothesley, the Earl of Southampton from the library of his friend, William Crashaw, and is one of two psalters that were once owned by de Lindsay.

The St John’s manuscript is ‘glossed’, meaning it is annotated in the margins and between the lines to aid the reader in understanding the text, providing commentaries and translations. The second, unglossed, psalter is in the care of the Society of Antiquaries (MS 59). 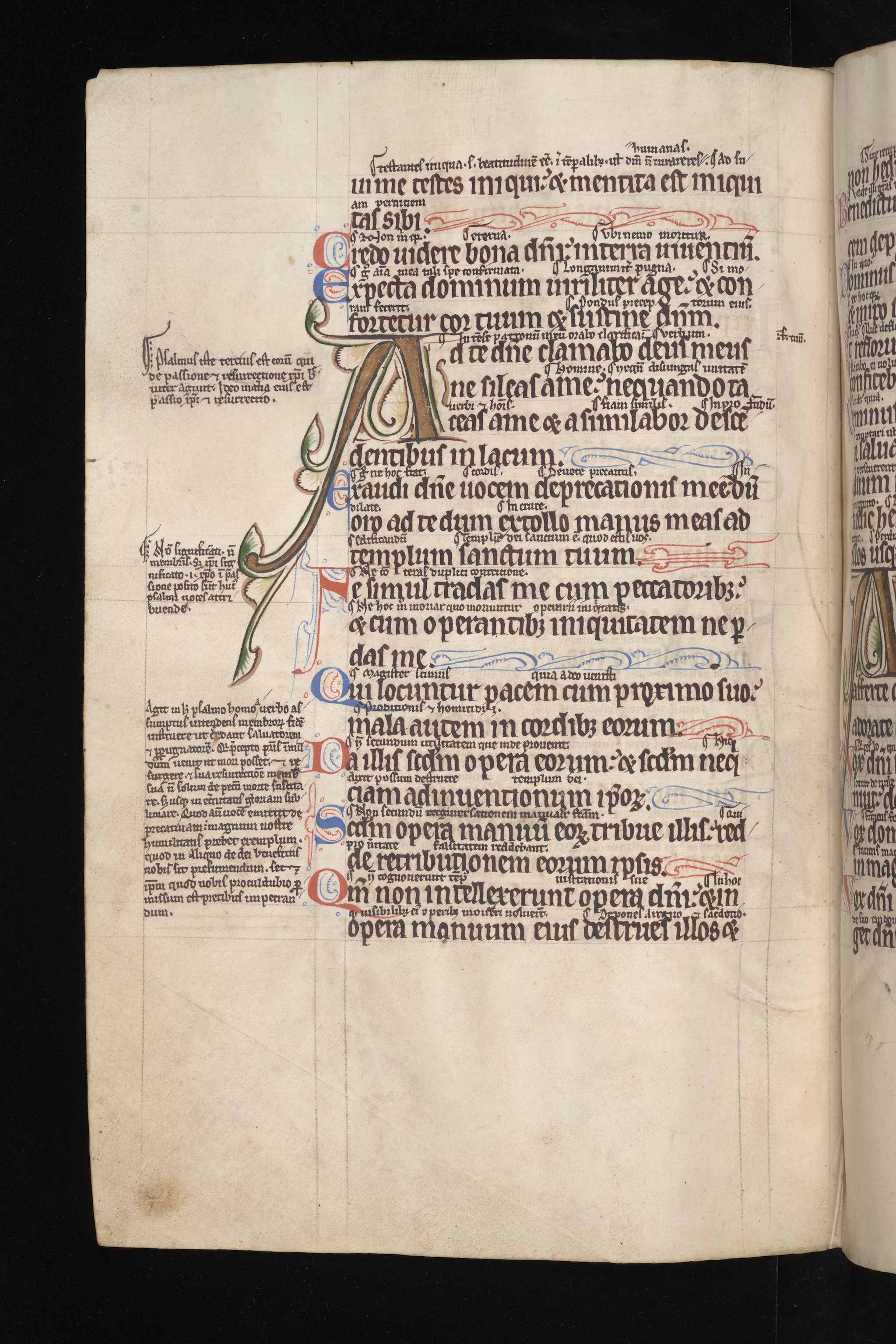 Kathryn McKee, Sub-Librarian and Special Collections Librarian at St John’s, said: “This manuscript is a finely written and beautifully illustrated example of early 13th century work. Any manuscript that is digitised gives greater potential for research because it means that scholars who are working remotely from Cambridge have the chance to study it in great detail.”

The original D.6 manuscript is housed in The Old Library, which dates back to 1624 and houses the College’s Special Collections. St John’s is also home to one of the best Biographical Archives of its kind, featuring records of all past and present Members of the College since comprehensive admissions records began in 1629 – that’s more than 43,000 individuals, including many historic figures; from former Poet Laureate William Wordsworth (1770-1850) to author and humourist Douglas Adams (1952-2001).

The manuscript work begins with an ecclesiastical ‘Kalendar’ in red, blue and black, illustrated with colourful medallions containing the signs of the Zodiac for each month. The Kalendar does not feature any Peterborough saints, which suggests it was the personal copy of de Lindsay rather than a working manuscript of the abbey, now Peterborough Cathedral.

The Kalendar is followed by the Prologue to the Psalms, then the Hours of the Virgin, which opens with a historiated initial on gold ground. Four pages of paintings depict scenes from the Gospels, while the frontispiece is a magnificent initial B in gold, pink and green, which fills the entire page. In the initial is a small picture of King David with his harp. The text concludes with Cantica, Litany and the Office of the Dead.

The manuscript was digitised after an alumnus of St John’s financially supported the project. It was photographed on-site by Maciej Pawlikowski, Head of the University Library’s Digital Content Unit. The high resolution images can be viewed in glorious detail on Cambridge Digital Library alongside metadata provided by St John’s. 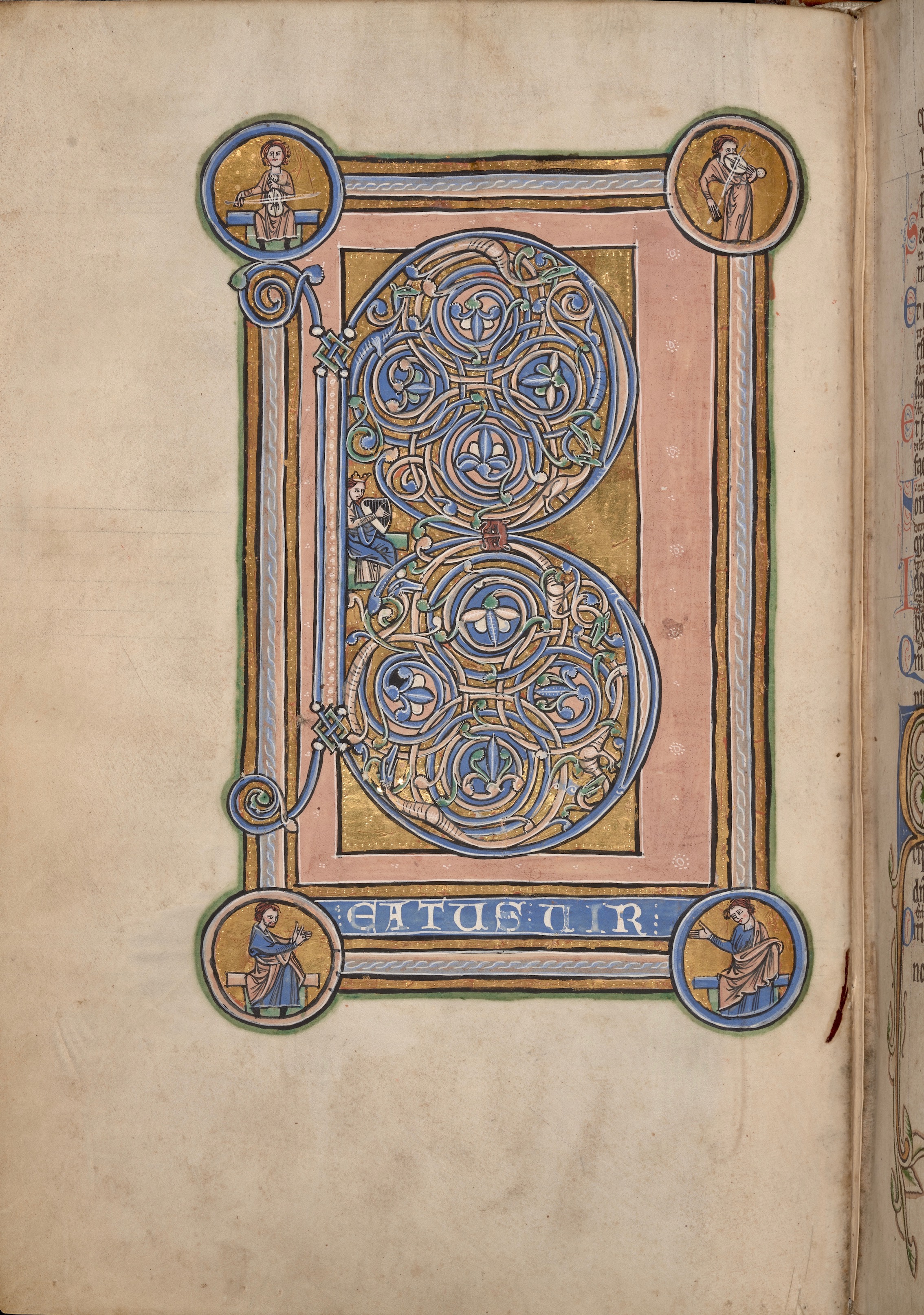 The College’s primary focus has been on cataloguing its collection of historic manuscripts, rare books and personal papers, rather than large-scale digitisation projects. Opportunities are taken to digitise material whenever an offer of funding or participation in a wider project makes this possible. Researchers can zoom in incredibly closely to each digitised page – showcasing the manuscript in much finer detail than possible with the naked eye.

Kathryn explained: “You can start to see how the manuscript was originally made; whether the text written first or whether the ornate initials were illustrated first and what order the different colours were added. You can see the individual strokes of a pen or brush, which makes it far more real. If you are looking at the physical object, unless you have very good eyesight and a magnifier, you can’t see that level of detail. It’s only with the high quality photography that you can appreciate some of the techniques used. It is fascinating.”

See the manuscript in the University of Cambridge Digital Library.

Images by permission of the Master and Fellows of St John's College, Cambridge