Lest we forget: Who will you remember? With the centenary of the start of the First World War upon us, the Family Tree team each remember an ancestor who fought in the

With the centenary of the start of the First World War upon us, the Family Tree team each remember an ancestor who fought in the conflict.

All four of my great-grandfathers volunteered to serve in the First World War; one a former Boer veteran, and another of them going on to fight in the Second World War too, along with both my grandfathers. And I feel enormously fortunate that this Remembrance Sunday, while I'll be remembering those who have lost their lives in war, that none of my direct ancestors died. Nevertheless, those conflicts have cast long shadows over all our lives.

The first Remembrance Sunday I can recall was from when I was aged about seven in our local town, and looking back now I realise that, of course, then the former servicemen proudly marching by would have numbered veterans from both global conflicts – men who were remembering, first-hand, their own comrades and loved ones.

Time passes and over the years, fragile bundles of memories and tales have been handed down, often somewhat haphazardly, from generation to generation, and now we pass on the treasured anecdotes and glimpses of the past to our own children too.

And it's important that we do. Not to be jingoistic, or beat the drum, but because for each and every man who fell, not only were their lives cut short but families were shattered, and the price of war too easily forgotten. I'm rather ashamed to say that, despite researching my ancestors for a long time, it was only earlier this year that I discovered that one of my family members (my great-granny’s cousin) did die in the First World War – Alfred Spencer, in 1917 – aged 20, typically tragically young. And like so many of those who fell, he died young and childless – with inevitably no direct descendants to remember him, but this is something I will try to redress, remembering him in the years to come.

About my great-grandfathers – in case someone out there has them on their tree too. They were: 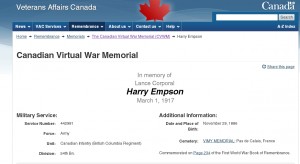 As I join friends and neighbours at our village war memorial this Sunday, with the High Street traffic brought to a halt and only birdsong to break the sound of silence, I will be proudly watching my son and his cub pals curb their usual buoyancy to join local dignitaries for the annual Remembrance service. When the Last Post plays, I will spend a moment contemplating the life of my 2x great-uncle Harry Empson.

I only discovered Harry’s existence recently, after an uncle casually mentioned he thought our family had a link to Canada. Harry’s story had been lost to our family for generations but, a century on, after having this family titbit tantalisingly dangled before me, I have begun to unearth it once more. Born in my own home town of King’s Lynn in Norfolk on 29 November 1886, it seems Harry emigrated to Canada in 1904 as a teenager, as records reveal his older brother Arthur had a few years before. Victorian census records show the Empson family in the Lynn workhouse, and it’s possible that Arthur (born in 1884) was a child migrant, sent off to a supposedly better life in Canada by a UK charity. 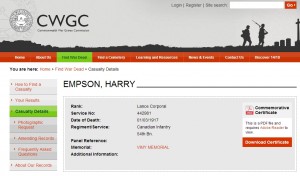 Fast-forward a decade and we find Lance Corporal Harry Empson 442981 of the Canadian Infantry 54th Battalion was killed on 1 March 1917. He is commemorated on the Vimy Memorial, along with some 11,000 Canadian servicemen who died in France, many of them in the fight for Vimy Ridge, who have no known grave. Canadian service records show Harry, who was a cook when he joined up in 1915, left all his worldly goods to his mother back home in King’s Lynn, the wonderfully-named Venus Empson. It seems he never forgot his mum. I was incredibly touched to find his name listed on the King’s Lynn war memorial as well as the Canadian Virtual War Memorial. I’ve no idea if he and Venus ever saw each other between him being posted to Britain and then to France, but I like to think she never forgot him either.

On Remembrance Sunday, I will remember Harry, the young British migrant who returned to fight for King and Country and, like so many, paid the ultimate sacrifice. 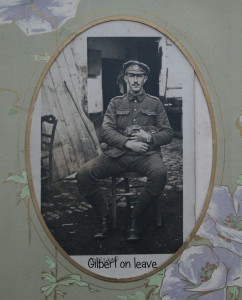 'Lance-Corporal Gilbert Blackburn, of the Norfolk Regiment, who was killed in action on April 28th, 1917, was in his twenty-fifth year. He entered the Company's service as an engine-cleaner at Norwich on July 1st, 1911, and became acting fireman in June, 1914. The following April he volunteered for active service with the forces and went to France five days after Christmas of 1915.'

These are the bare facts of my 2x great uncle Gilbert Blackburn’s career with the Great Eastern Railway (GER), his war service and death, as recorded in the GER magazine’s ‘Toll for the brave’.

I have taken Gilbert into my heart. He married just before the war but never had any children as far as we know. It seems his wife didn’t keep in contact with the family after Gilbert’s death. As there are no direct descendants to remember Gilbert, I feel honoured to think of him on Remembrance Sunday. Other than wearing my poppy with pride and making a donation to the Royal British Legion every year, remembering and honouring is the one small thing I can do to make the tragic loss of life mean something.

No family stories have been passed down to me about Gilbert or his war service, only the page from the GER magazine. I have no way of knowing what kind of person he was, but I have an image in my mind of a courageous young man who stepped up to play his part in something we now know to have been an unimaginable horror. 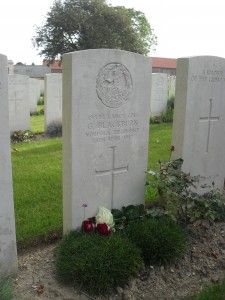 I feel proud to have been able to piece together facts about Gilbert. I found his medal record at The National Archives, his will and details of his burial via the Probate Office’s archive of soldiers’ wills and most importantly traced his final resting place via the excellent Commonwealth War Graves Commission website. My mum has even been able to make the trip to France and pay her respects at his grave.

I may not have known Gilbert, or have even heard family stories about him, but I know he was one of mine. I remember him for that reason and also out of a respect for his close family that would have felt his loss terribly - his mother was my great-great-grandmother, my direct maternal ancestor. As family historians we don’t just collect names and dates; we empathise with the family that came before us. It’s their life experiences that shape us, after all.

But in remembering Gilbert I also feel a deeper connection to all the servicemen and women who have fought and died for us. It’s like putting a face to a name - we have a real person who fought and died in a war that now, 100 years on, despite all the documentaries and commemorative projects, can seem very alien to us. By remembering my uncle Gilbert I can begin to understand the greater impact of the Great War on ordinary families like mine.

Who will you remember?

Now it's your turn. Try these 5 useful websites to trace the war hero in your family.