Heraldic and genealogical manuscripts fetch over £2,400 at auction in Gloucestershire Four lots of genealogical and heraldic manuscripts which included information on several prominent English families, sold for more than £2,400 at Dominic Winter Auctioneers.

Four lots of genealogical and heraldic manuscripts which included information on several prominent English families, sold for more than £2,400 at Dominic Winter Auctioneers.

The sale, which took place on 14 June 2017, comprised printed books, maps and documents, including a set of rare Russian books, which fetched £39,000.

Some of the auction highlights are outlined below:

Lot 374* Dugdale (William, 1605-1686). Autograph letter (pictured above) signed ‘Wm
Dug[dale], RougeCroix’, 29 June 1640, to an unnamed recipient,
returning rolls of arms which Sir Christopher Hatton [1540-1591,
English politician, Lord Chancellor of England] had borrowed [for
his Book of Seals which was being compiled at that time] and asking
for the loan (for the same purpose) or Sir Henry Spelman’s ‘booke
of Armorye’ and also for a sight of any of his deeds relating to the
families of Manwaring of Cheshire [for whom Dugdale compiled
their pedigree and family history] and Darcy of Yorkshire or
Lincolnshire, and expressing the hope that he has finished the
ordinary and the analysis of arms which he had formerly begun,
signature wormed with loss of last four letters of surname, paper
somewhat browned, 1 page, folio
Provenance: Sotheby’s, 12 October 1976, lot 462; Major Anthony R. Tavener.
Included with the lot are several photocopies and two letters to Major
Tavener from the Bodleian Library and the British Library, the latter of
which proposes Sir Edward Dering and the heralds of Sir Henry St George
and Sir William Le Neve as possible candidates for the recipient of this
letter.
Fetched £800 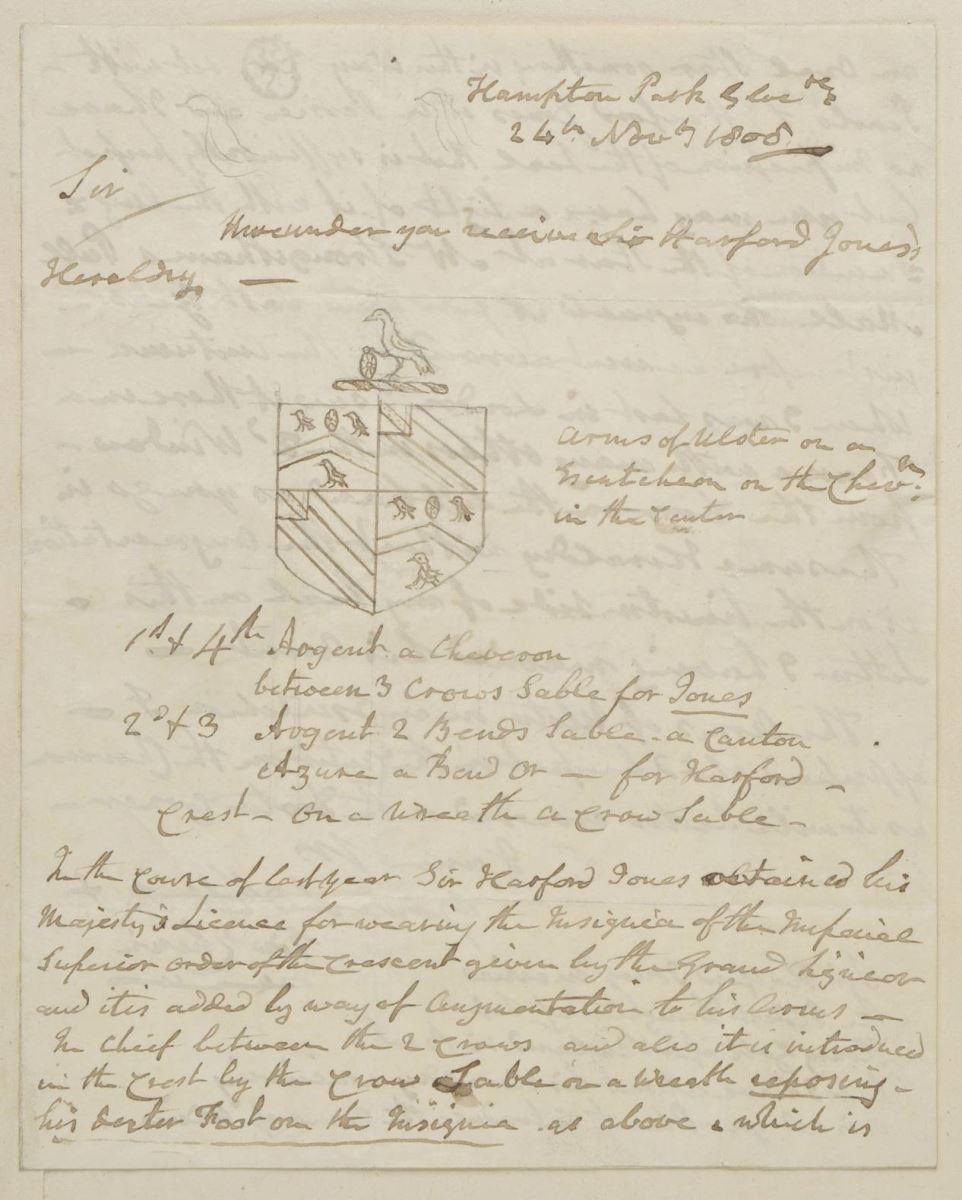 Lot 376 Genealogical Papers. A miscellaneous collection of 50
manuscript items relating to genealogy, heraldry, etc., mostly late
18th and early 19th century, including collateral representations of
the Plantagenets and Tudors, genealogy of the Ayscoughs of
Skeusby, genealogy of Atkyns of Gloucestershire, genealogy of the
family of Barne, pedigree of the family of Caldwell, of the family of
Chadwick, note respecting the descent of the family of
Collingwood, pedigree of the family of Cordell, and its alliance to
that of Firebrace, descent of the family of Edge, note relating to the
pedigree of Galway, letters respecting the pedigree of Sir Ar. Jones,
note respecting the descendants of Bishop Muse, genealogy of the
family of Peshall, family of Radcliff, family of Vaughan, various notes
and papers respecting arms, pedigrees, etc., addressed to Ralph
Bigland, Herald, various sizes, all neatly mounted on guards, a few
repairs, 19th-century half calf, rubbed and soiled, folio
Provenance: Major Anthony R. Tavener.
Fetched £150
Lot 377 Grosvenor Family. A heraldic and genealogical manuscript of
the Grosvenor family compiled by Richard Bertram Grosvenor,
circa 1910, a total of 371 numbered pages including some blanks,
the majority with genealogies and a total of approximately 350
hand-painted coats of arms in watercolour, Apologia initialled RBG
at front and Grosvenor’s ownership inscription with his Chelsea
address in pencil to front free endpaper, a few rough notes
including early draft index loosely inserted, scattered dust-soiling,
all written neatly and clearly in a ruled ledger, contemporary half
calf, backstrip deficient, old black linen cover, slightly soiled, folio 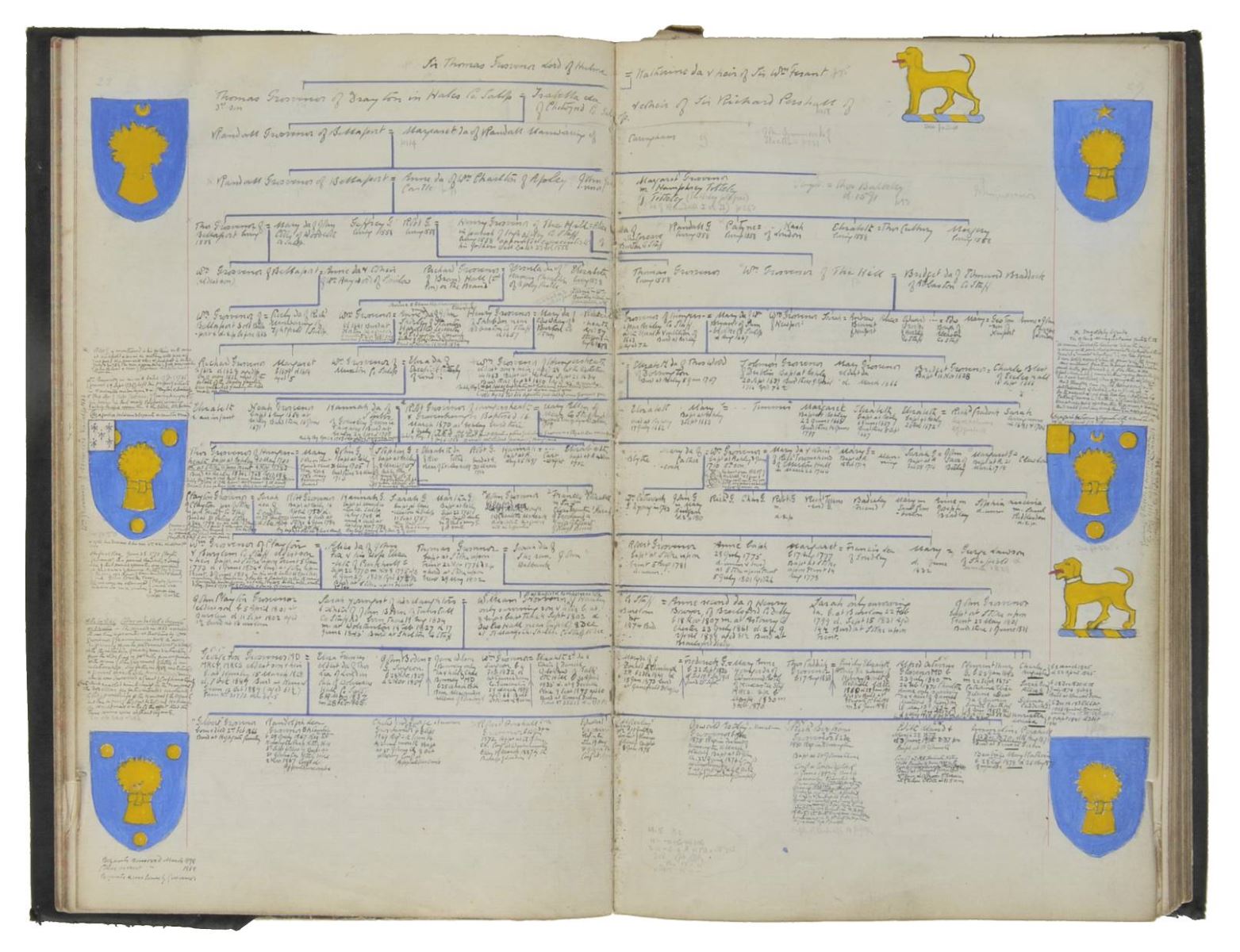 A very detailed genealogical and heraldic manuscript. The occasional blank
pages and missing or uncompleted coats of arms and index suggest that this
was an unfinished work when Captain Richard Bertram Grosvenor of the 11th
Battalion died of illness contracted on active service in 1921 aged 40. He
had trained as an engineer and before the war worked on the designing of
engines and metal testing, but also had considerable skill as a watercolour
artist. In 1916 he served with the 4th Army in the Battles of the Somme, until
his health broke down as a result of shell shock near Ovillers in October,
when 36 of his men were killed by one shell. In spite of several attempts to
carry on and serve during the war he never regained his health and spent
much of his few remaining years in war hospitals and nursing homes.
Fetched £520 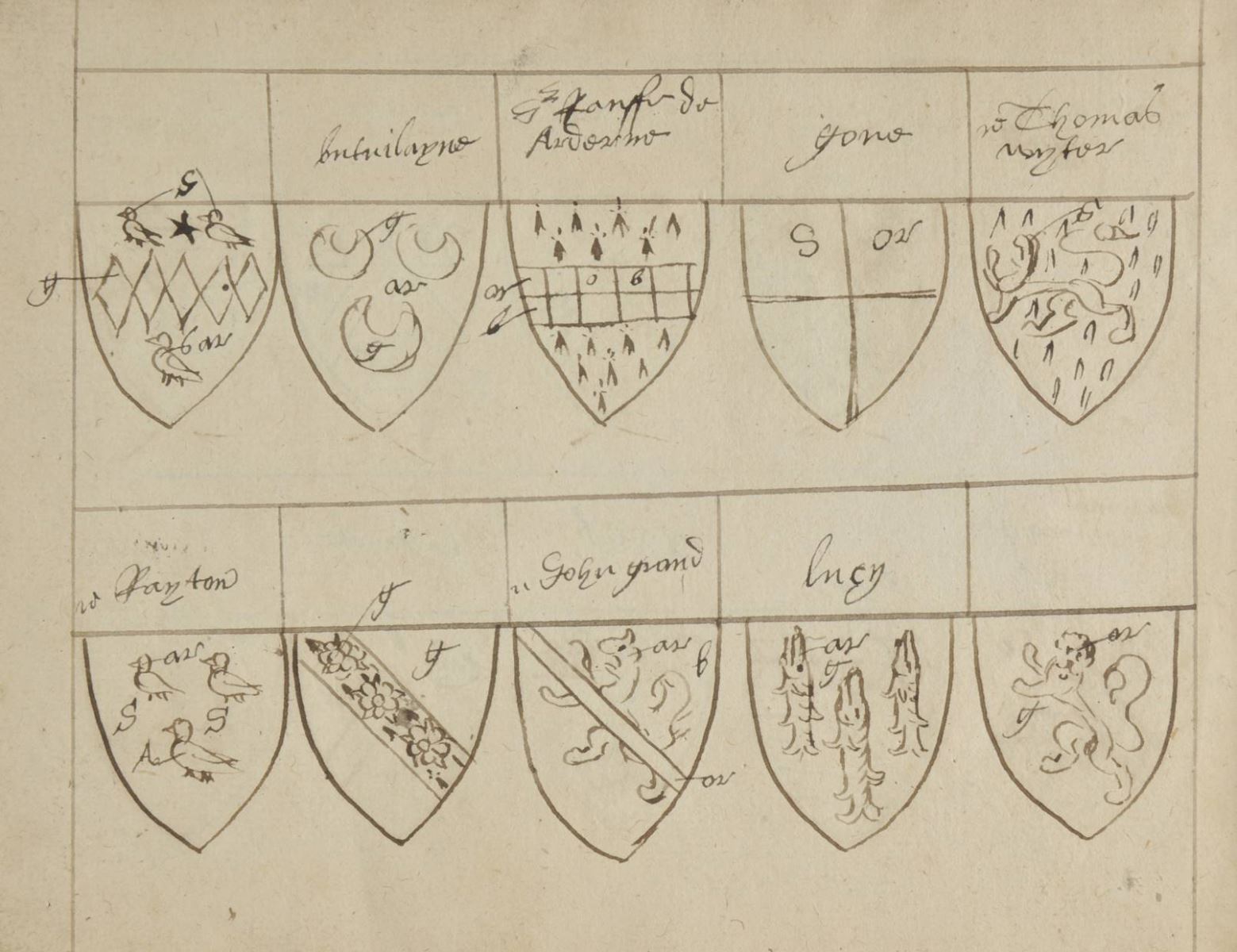 Lot 378 Heraldic Manuscript. A Roll of Arms, copied by Thomas Digby,
1640, browning on laid paper, the shields arranged in two rows of
five on each page, the majority with family name neatly written in
cell above each shield, a total of 13 leaves, the first page with the
ownership name of the copyist ‘Tho: Digby, 1640’ in upper margin,
the penultimate and last identified coat of arms being that of three
“Luces” (Pike) for Thomas Lucy’s family of Charlecote Park near
Stratford-on-Avon, Warwickshire, the second leaf neatly rehinged,
the ninth leaf with conjugate stub between folios 6 & 7, a little dustsoiling
throughout, uncut edges, modern quarter morocco and
marbled boards with vellum tips [by Douglas Cockerell & Son, 1979],
title label lettered in gilt ‘Lucy Roll: Copy of Thos Digby 1640’, oblong
8vo (155 x 210mm)
The coats can be traced to the Dictionary of British Arms (vols. 1-4), the
manuscript here corresponding to nos. 1-170 and 176-265. It would thus
appear to lack nos. 171-175 [an omission by the copyist?] and 266-282,
perhaps one final leaf.
Provenance: Major Anthony R. Tavener.
Fetched £1,000
For more auction results and details of upcoming auctions, visit the Dominic Winter Auctioneers website.