'From street to trench' Medals, memorial plaques, service books and printed entries from the Roll of Honour remind us of the sheer variety of material evidence of military activity that might turn up among family possessions.

If you had ancestors living in the North-West during the time of the First World War, a visit to this new exhibition at the Imper

If you had ancestors living in the North-West during the time of the First World War, a visit to this new exhibition at the Imperial War Museum North will enlighten and enthral. You probably won’t find details about your own family members, but so carefully have the subjects, themes and sources been chosen here that – whatever they did during the war - you are actually very likely to get an oblique glimpse of them by way of one  exhibit or another.

The populous North-West was key to the First World War effort in two major respects: as a centre of recruitment (thousands joined up and fought, particularly in Turkey, France and Belgium), and as a major industrial centre. Many local women found work in factories that were were turned over to new purposes; Manchester mills fashioned military uniforms, for example, and Pilkington’s glass factory in St Helen’s made the small glass portholes for submarines.

The IWM exhibition usefully shows how information about military ancestors might turn up in the most unlikely places. Edward Felix Baxter was a teacher in Liverpool who became a motorcycle despatch rider and then an officer in the 1/8th Battalion of the Kings Liverpool Regiment. He was awarded the VC for bravery in a trench raid on 17-18 April 1916. Family historians might be surprised – but edified -  to discover that his  full obituary appeared in Motor Cyclist magazine on 5 October 1916.

Many other thought-provoking sources vie for attention. Conscientious objection, for example, is tackled through an autograph book kept by Euclid Thursby, a cotton worker from Nelson, Lancashire, who was sent to work in the Power Loom Department at Wakefield Work Centre after he refused to join up. An audiotape of one Eveleyn Elleshaw reminiscing about how she watched women giving white feathers to men on the streets of Lancaster in 1914 gives a less sympathetic slant on the same issue.

All in all, the exhibition provides a rich sensory experience – combining film, audiotapes, official and personal writing, military paraphernalia and personal effects – that will, at the very least, give you plenty of inspiration about how you might find out more about ancestors living anywhere from Manchester to Merseyside and Cumbria to Cheshire in the period 1914-1918. 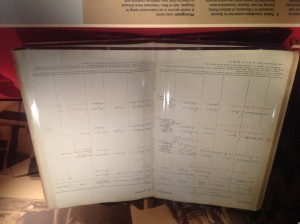 Enemy Aliens Register: 398 ‘enemy aliens’ (mainly young German and Austrian men) were recorded by Salford Police as living in the area in August 1914. This exhibit has been loaned to the IWM North by the Greater Manchester Police Museum and Archives – a reminder of how many different repositories might hold clues to our ancestors in this period. 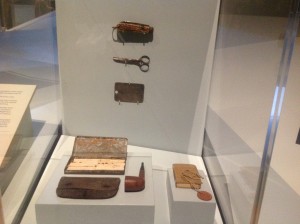 The poignancy of personal effects – penknife, mirror, scissors, pipe, tobacco pouch and cigarettes belonging to soldier Albert Tattersall from Moston, Manchester who died after being wounded on the first day of the Battle of the Somme, in July 1916. 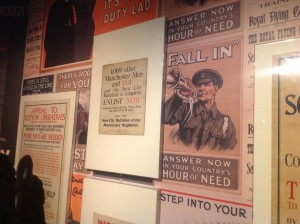 A reminder of the vast propaganda campaign in the North-West to attract volunteer soldiers in the early days of the War.

Thank you to family history researcher and author Ruth Symes for her coverage of the exhibition. Read more about Ruth's genealogy interests at searchmyancestry.blogspot.co.uk