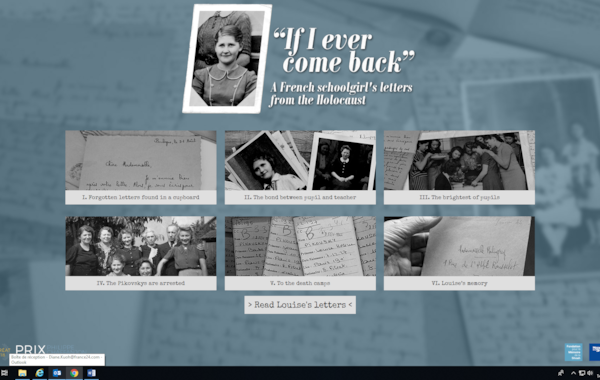 In 2010, a collection of wartime letters and photographs was discovered in an old cupboard at a high school in Paris. Forgotten for years, the letters were written by a former pupil, Louise Pikovsky, to her beloved school teacher during World War Two.

The last note dates to the day Louise and her family were arrested at their home. Father, mother and all four children were imprisoned in the Drancy internment camp near Paris before being deported to Auschwitz. Sadly, the Pikovskys never came back.
When France 24 journalist Stephanie Trouillard found out about the letters, she decided to help Khalida Hatchy, a teacher and librarian at the school, explore Louise’s story. Starting with the young pupil’s writings and photographs, they were able to track down witnesses, cousins and former classmates from her time at the lycée Jean de La Fontaine. Through months of research, they pieced together fragments of her life, and shed light on the circumstances of the family’s disappearance.
This web documentary recounts their historical investigation, which eventually led the two researchers to Jerusalem. More than seventy years after Louise’s untimely death, it finally gives a voice to a talented young girl who was unable to fulfil the bright future she deserved.
Read the letters
The letters are available to read in English here and you can see the documentary here.
QUICK LINK: 4 websites to help you grow an international family tree