Stanley Harmsworth at the 60th D-Day anniversary. Free tours for D-Day veterans and a family member&hellip; Recently the Br

Free tours for D-Day veterans and a family member…

Recently the British Government has started to offer D-Day survivors a chance to revisit the Normandy beaches with a family member and a carer to help. The scheme is financed by the Treasury through Libor bank fines and is organised by the Royal British Legion’s travel arm, Remembrance Travel. To discover more about Remembrance Travel and their Libor funded tours, visit www.remembrancetravel.co.uk.

Many of us have often heard about a family member’s heroic acts in WWI and WWII but it’s incredibly hard to imagine what it would have been like to have fought in some of the key battles that shaped the 20th century. Here we discover what it was like for one granddaughter to return to the D-Day beaches to understand a little more about her granddad… 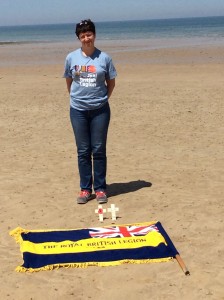 WALKING IN GRANDAD’S FOOTSTEPS ON THE D-DAY BEACHES

Stepping in at Juno Beach

Stanley (Stan) Harmsworth was born in 1911 in Hampshire. On 6 June 1944, he was among the forces who came ashore on Juno Beach within the first couple of hours of the D-Day landings in Normandy.

Normandy meant a lot to Stan who attended the 40th, 50th and, 60th Normandy anniversaries. He died in 2006 at the age of 94 but in June 2014, Stan’s granddaughter, Carol Morris, was in his place at the 70th Anniversary of the D-Day Landing on a Royal British Legion, Remembrance Travel tour to Normandy.

‘This trip was everything that I’d hoped it would be’, said Carol. ‘I visited the main beaches of Normandy and stood in pretty much the same spot on Juno Beach as my granddad had when he landed 70 years ago.’

Stan was called up into the Royal Electrical Mechanical Engineers in 1942, aged 33, after a spell in the Home Guard. The following summer, he was posted to the 22nd Beach Recovery Unit, a new outfit comprising one officer and 25 men. They did their training in preparation for D-Day in several seaside locations in the UK. The main task was to keep the beach clear of wrecked landing craft and drowned vehicles, otherwise following craft could not beach. 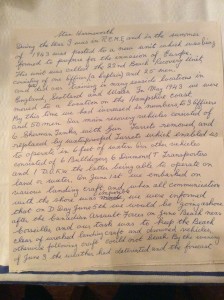 Stan kept an account of his wartime experiences. His handwritten notes give a vivid account of that day:

‘Rough it certainly was. We were each issued with pack rations and one bottle of water, both of which had to last at least 48 hours. As darkness fell, we were advised to get some sleep. Some hopes - what with the sea spray and the droning of the Bombers overhead, sleep was impossible … Then for a time all was quiet …

‘After what seemed an age it was our turn to ground and disembark. The ramp went down and the first vehicle started its journey ashore. It was then that I watched a Bren Gun carrier weaving between the obstacles. It got too close to one and was blown up by a mine. Our tank eventually descended the ramp and started its arduous journey to dry land. It was successful and we crossed the beach and passed through a gap in the sand dunes, where we unloaded our personal kit. Soon, we were back to the water’s edge doing our job of towing ashore drowned vehicles. Our bulldozers pushed grounded landing craft back into deeper water. The Royal Engineers, meanwhile, were clearing mines attached to the iron stanchions and dragging the obstructions ashore.

‘Once ashore, the unit spent the whole day rescuing broken-down vehicles, which were towed to "Drowned Vehicle Park". Last job of day, at midnight, was to remove tank traps which were blocking the road in the village.’

The unit stayed on the beach until August and was there when Winston Churchill, Field Marshal Jan Smuts and General Sir Bernard Montgomery arrived. Stan was then part of a tank recovery unit which took part in the advance into northern France and Belgium. His unit arrived in Eindhoven in May 1945 when the Netherlands was finally liberated. 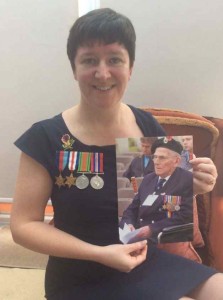 Carol Morris with a photo of her granddad and wearing his medals.

For Carol Morris, the tour back to the beaches where her granddad had been so brave was almost overwhelming.

The tour took in all the fiercely defended beaches at Normandy, a Remembrance Service at Bayeux Cemetery and visits to Pegasus Bridge and nearby Café Gondree, the first building in France to be liberated.

‘I watched in amazement as members of the parachute regiments re-enacted the main drop close to Pegasus Bridge and enjoyed a fly past by Spitfires. I attended the wonderful service at Bayeux Cemetery with HRH The Queen and HRH Prince Phillip in attendance and I participated in very moving private memorials in different cemeteries where we paid tribute to the relatives and friends of people in our group’.

‘We arrived at Graye-sur-Mer (Juno): Time to put Granddad’s medals on. I was in the right place, on the 70th Anniversary and surrounded by veterans and their families. It was too much so I escaped before people could see me crying.’

Carol was grateful for the support of members and staff of the Royal British Legion who accompanied them, which included a standard bearer and an experienced guide. ‘We got as close as possible to the spot where my granddad landed.’

The company of veterans gave an added dimension to Carol’s trip and allowed her to put her granddad’s war experiences into context: ‘At the start of the tour, I didn’t know any of them but by the end, I felt that I’d known some of them for years.’

Her highlight was ‘just being there – remembering Granddad and feeling immensely proud, surrounded by these veterans who all had fantastic stories to tell’. She was happy to continue the tradition of attending the Normandy commemoration on behalf of her granddad, ensuring that his deeds and memories will live on in the family.

Carol will continue looking at her heritage and is planning a trip to France in 2018 to visit the grave of Stan’s older brother Samuel who died in 1918.