Family food stories from down the generations shared on Our Food, Our Family with Michela Chiappa 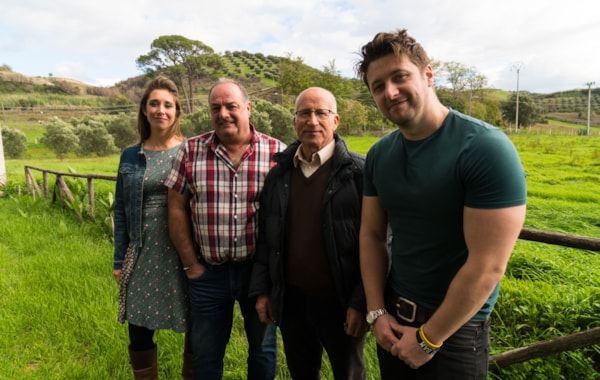 Michela, Fausto and Huw with their cousin in Calabria

Meeting families from diverse backgrounds from around Wales, Michela - previously seen in A Welsh-Italian Christmas with Michela Chiappa– uses their family recipes to help them reconnect with their roots.

The first episode features the Welsh-Italian Algieri family from Bodelwyddan, as Michela meets Huw who confesses he knows little about his origins outside of Wales.

Helping Huw to shine a light on his family history, they discover the story of Huw’s grandfather Vincenzo; an Italian prisoner of war during World War Two who was stationed on a farm in north Wales and fell in love with a local girl - Huw’s grandmother Betty. After the war, he returned to Italy but couldn’t bear to be away from Betty and so returned in 1946 where the couple bought a farm and raised a family.

She traces the Algieris back to Calabria in Italy and takes Huw and his father Fausto on a pilgrimage to meet their long lost cousins. There they find out more about their families’ past in Italy.

With the help of local historian Adrian Hughes, Michela also finds out more about Vincenzo’s journey following his capture at Tobruk – most likely by Australian forces - during the war taking him to Egypt and South Africa, as well as four separate prisoner of war camps, before ultimately arriving in Wales.

She then helps them to prepare a feast for the family back on the farm where Fausto grew up. From pasta and polpette (meatballs) to pigs’ blood pudding, the pair share a selection of sumptuous recipes with Michela that have been passed down through the family as she takes them on a journey of self-discovery.

Fausto Algieri said: “Meeting Michela Chiappa on our first day of filming was amazing she is such a bubbly person and so passionate about meeting people and sharing her vast knowledge of cooking, we had a great time with Michela throughout the filming and she was really excited about meeting my mother and other family members, the visit to the farm where I grew up was very emotional and very moving, it was a lovely experience.

“The trip to Italy with Michela and the film crew was fantastic. The visit to the farm where my father grew up was unbelievable. As we drove up to farm, and as soon as I got out of the vehicle, I had a look around and it was then at that point that I fully understood why my father bought a farm back in North Wales, it was uncanny to see how familiar the farm in Italy was compared to the farm in North Wales.

“Meeting the family in Italy was wonderful and listening to them talking about my father as he grew up was so lovely and very moving, I will cherish this experience for the rest of my life I still can`t believe it took place.”

Huw Algieri added: “The trip to Italy was fascinating and being able to see where my Taid (Grandfather) was born was incredible to see. I’ve always been interested in Vincenzo’s story so being able to go to Italy and see it first hand is an experience I will always cherish forever.”

Our Food, Our Family with Michela Chiappa