The painting goes back on display © NT Images-Arnhel de Serra

A painting of Dunkirk owned by Sir Winston Churchill has gone on public display at his former home Chartwell for the first time following conservation and repair.

Winston Churchill’s first weeks in office as Prime Minister was marked by his famous wartime speech in which he declared, ‘we shall fight them on the beaches’ following the evacuation of Dunkirk in May-June 1940.

Now, following ‘extensive conservation and intricate repair’, a painting owned by Churchill that depicts that famous rescue of troops has gone on public display for the first time at his former home, Chartwell in Kent.

The oil on canvas painting by wartime artist Ernest Townsend shows some of the 300,000 soldiers evacuated safely from France following Nazi Germany’s invasion. It was gifted by the artist’s son to Churchill in 1947.

In the years after the war, with thousands of gifts being offered to Churchill from around the world, the sheer volume meant he could not accept them all. This was one of those where he replied that he would be ‘honoured to accept’.

The painting (1457 x 1240 mm, 4 ft, 7in x 4ft) was originally delivered to Churchill at his London home but was then moved to Chartwell. It is hoped further research may uncover  where it was originally hung at Chartwell, but at the time the inventory of contents was drawn up in 1965 after Churchill’s death, the painting was recorded as being in his studio in the garden. 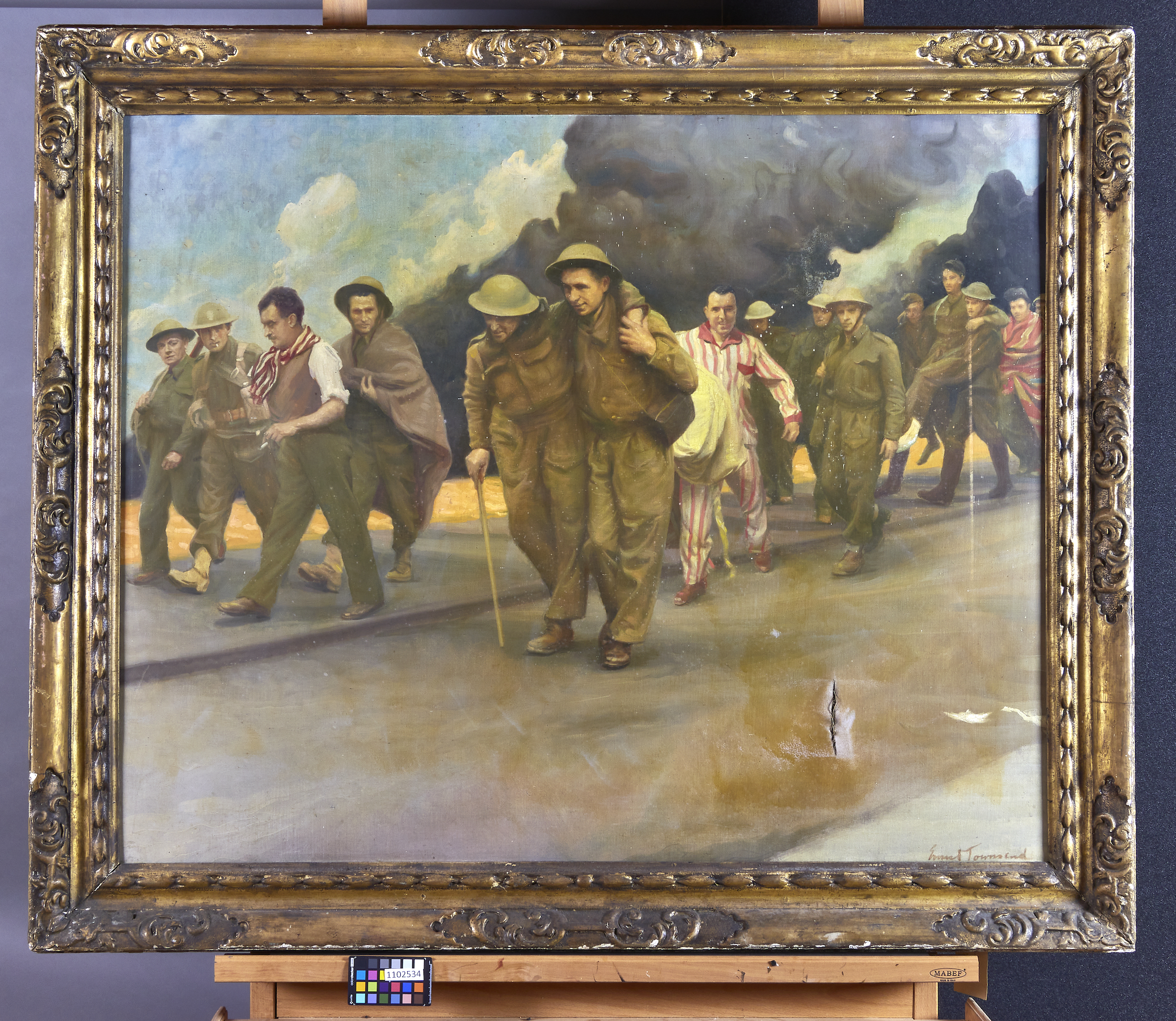 At some point during its life, the painting sustained a 10cm tear in the canvas and over the years the varnish had yellowed. Around 100 hours of cleaning and repairs have now been completed, borrowing a technique used for medical treatment of wounds, with the use of sutures to mend the tear.

Paintings Conservator Sophie Reddington commented:  “The tear in the canvas was repaired by carefully humidifying the area, using Gore-Tex as a vapour barrier, preventing direct contact with water. This relaxed the broken threads enabling the torn edge to be neatly aligned and temporarily held in place with kinesiology tape (commonly used for sports injuries).

“The threads were re-woven with a surgical needle and then secured with adhesive – in a similar way to how wounds are treated with sutures. I was introduced to the technique a few years ago and am delighted by its success as a temporary fixing method.

“It is also always hugely satisfying removing old varnish layers from paint surfaces when they have discoloured badly over time. Often paintings have lost their original colours and dimensional appearance. Removing aged varnish layers is like bringing a painting back to life and this painting looks transformed with its colours fresh and vibrant again."

The painting of Dunkirk is one of a number of ‘war art’ paintings in the collection at Chartwell which were formerly owned by the Churchills. It has been hung on Chartwell’s staircase landing, alongside a painting of an equally iconic moment in time - the work ‘Some of the Few’ by Roy Nockolds, which depicts Hawker Hurricanes flying as part of the Battle of Britain.

For further information and opening times visit the Chartwell website.