Every issue in Family Tree, family history photo-dating expert Jayne Shrimpton casts her knowledgeable eye over a selection of readers’ mystery photos. Unfortunately we just can’t squeeze in all those sent to the magazine, so please find just a few such photos below, which we’ve decided to publish here on our blog instead... If you’d like to have your family photos dated by Jayne in person, then come to the Family Tree stand, at Who Do You Think You Are? Live, Olympia. Here Jayne will be on hand to help you on Friday 22 and Saturday 23 February. To find out more about Jayne see www.jayneshrimpton.co.uk and to discover more about the show visit www.whodoyouthinkyouarelive.co.uk.

Q Please could you try to date these photos for me? Photos 1 and 2 may have been taken in Bristol, as they were with my father’s papers and he was a Bristol boy. I’ve no idea where the car pictures (photos 3 and 4) were taken, but a rough date would help me to work out who these family members could be. My father was born in October 1907, so could he possibly be the child? My late mother wrote ‘The Three’ by hand on the back of photo 3, but that doesn’t mean much to me. Photo 5 is of an unknown ancestor. My mum’s family had a connection with Norwich but not Yarmouth (presumably on the Isle of Wight). 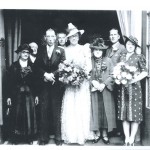 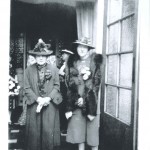 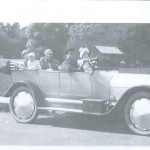 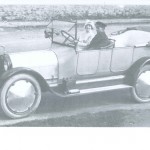 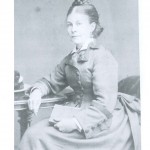 A Photos 1 and 2 appear to have been taken on the same occasion: we can see the same elderly lady in each, dressed in the same outfit. Photo 1 confirms that the occasion was a family wedding. The bride wears a full-length white bridal gown with a fashionable hat, rather than a traditional veil. The style of her interestingly shaped hat, worn on a slant, confirms that the date of the wedding is c1936-1940. The older ladies in each photograph are dressed in a rather conservative, timeless style, but the fashionable dresses, hats, shoes and fur stole worn by the younger women accord with this time frame. Hopefully the close date range of the photos will enable you to work out which family members may have been getting married here.

Photos 3 and 4 are clearly linked and were possibly taken on the same day. These relatives look to be enjoying a trip in what was perhaps a new family car. The driver in photo 3 is dressed as a trained chauffeur would be, in a peaked cap. In photo 4 one of the ladies seems to be having a go at the wheel, no doubt under close supervision of the chauffeur. If you wanted to contact the Surrey Vintage Vehicle Society (www.svvs.org) they would advise you of the precise model of car and may be able to tell you the year of its manufacture, which would give you a firm post quem date for these photographs. Meanwhile, the hats and coats worn by the ladies and child confirm that they were taken during the 1920s, as suggested by the note on the back of the postcard. The child looks young, perhaps aged about five or six years old, or thereabouts, so I’m afraid that he can’t be your father, born in 1907.

Unlike the previous 4 photographs, which are amateur ‘snapshots’, photo 5 is a formal studio portrait taken by a professional Yarmouth photographer. You mention that there is a family connection with Norwich, so I should think that this photograph is more likely to have been taken in Great Yarmouth, Norfolk, rather than the Isle of Wight. As we see from the back of the mount, Sawyer & Bird had branches in both Norwich and Yarmouth. Turning to the image, the three-quarter length composition is typical of the 1870s and 1880s, but this ancestor’s fashionable appearance - especially her hairstyle and dress with bustle projection - narrows the date closely to c1870-1875.

Q I wonder if Jayne can date this photograph. The name recorded on the back is Wright Samuel Jennison, so the gentleman in the picture is either my great-grand-uncle 1860-1898, or his son of the same name, 1891-1970, my grandfather’s cousin. 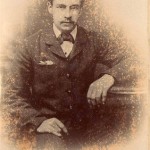 A Here we see a young man wearing the slender fashions of the late-19th century, characterised by the narrow cut of his lounge jacket or morning coat and the small, high lapels. Another clue is the white handkerchief in his top pocket - an accessory that became firmly established during the 1880s. I would date this photograph to the 1880s, which means that, out of the two candidates, this gentleman must be the earlier Wright Samuel Jennison, born in 1860. He would have been aged in his 20s here, which seems to fit the image perfectly.

Q I would be grateful for your opinion about this photograph of an original portrait. It used to hang in my mother’s house until she died, but she always said that she had no knowledge of the person portrayed. However my mother’s sister thought that the lady was their father’s mother, who was said to be an artist’s model of Dutch descent. Their father was my grandfather, who was born in Amsterdam in 1871 and died in Walthamstow in 1944. Your observations would be much appreciated. 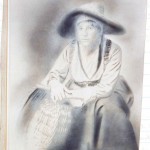 A The original portrait seems to be a sketch, perhaps executed in pencil or pastels. The lady is not wearing fashionable dress, or even British fashions, but, as far as I can tell, is dressed in historical Dutch or Flemish modes. Her appearance is a little hard to pin down precisely, but the style of her wide-brimmed hat, worn over a linen coif or cap, and her bodice seem to suggest Dutch 17th-century fashions. I’m afraid that I can’t tell you when exactly the artwork was created, but it would be quite possible that your great-grandmother, an artist’s model, was sketched in Amsterdam some time in the mid-late 19th century, wearing picturesque clothes and accessories that harked back to the great era of Dutch art.

Q Please may I have your help in dating these two photographs? The top photo we believe represents my grandmother, who was born in India in 1881 to John and Rachel Clarke, an Army family. They returned to England in 1885 and my grandmother was married in 1910 to a George Woolley of Liverpool. Is her uniform that of a servant or nurse? To me, her sleeves look to be of 1890s shape, and if so, this cannot be my grandmother, but must be her mother (born 1854). My siblings and I don’t know anything about the bottom photo, but wonder whether the man could be our grandfather, George Woolley (1882-1928). The little girl has a rather short dress, so could this date from the 1920s? If so, perhaps she is our mother, born in 1917, or one of her sisters. 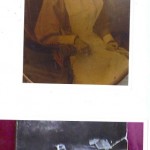 A The top photo is a formal studio portrait. Victorian and Edwardian nurses and house maids’ uniforms can look very similar, as in both cases a starched white apron was worn over a coloured dress, with a white cap. In this case, the additional white starched collar and white cuffs give this uniform a rather clinical look and the cap is more substantial than a maid’s more decorative cap, so I think the lady is a hospital nurse, rather than a domestic servant. As you say, her sleeves are puffed, a little like the sleeves of the 1890s, but this style also occurs sometimes in the late-Edwardian period and her hairstyle confirms a date range of c1906-1911. In view of the period, I see no problem with this young woman being your grandmother, born in 1881.

The bottom photo is a rather poor quality amateur snapshot taken outdoors and the details are hard to see very clearly. However, the man’s narrow suit with short trouser legs and his wide flat cloth cap suggest a date in the 1910s or early 1920s, while the short dress of the little girl narrows this broad time frame to at least the mid-1910s. Based on these dress clues, I would suggest a date range of c1915-1925 for this scene, which means that the child could well be your mother, born in 1917, or perhaps one of her siblings.