This Easter weekend sees a number of commemorative events taking place to mark the centenary of the Easter Rising 1916. The 19

This Easter weekend sees a number of commemorative events taking place to mark the centenary of the Easter Rising 1916.

The 1916 Easter Rising was a pivotal moment in modern Irish history. It transformed the political landscape, paving the way for Irish independence, while also leaving a contentious legacy.

Trinity College Dublin played its own not inconsiderable role in the events of the Easter Rising: it was part of the theatre of conflict, provided refuge and succour for the wounded, became a temporary burial ground, and was a rallying point for Crown forces.

As part of a series of commemorative events at Trinity, the Library of Trinity College Dublin explores some of its collections of 1916-related material in an exhibition Changed Utterly: recording and reflecting on the Rising 1916-2016. It examines the way the Rising was recorded at the time; how it was commemorated 50 years later; and how it is being discussed and reassessed today. 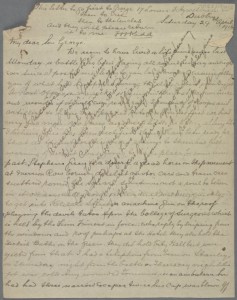 Letter from Frederick William Kidd to his son George Montgomery Kidd describing the events as they unfold (TCD MS 9932/135/2).

Amidst all of the destruction and confusion, Dubliners came to realise that they were witnessing historic events, and began to record what they saw or heard by writing letters, taking photographs, compiling scrapbooks, and gathering ‘souvenirs’.

Many letters which were intended to wish family and friends a Happy Easter soon became personal ‘diaries’ of the writers experiences of the Rising. With the occupation of the routes in and out of the city, and the seizure of the General Post Office (GPO) as the rebel headquarters, many writers were forced to hold on to their letters, continually updating them, until the conflict had passed and they could finally be sent.

Dubliners gathered up ‘souvenirs’ of the fighting. As the focal point of the Rising, the GPO became a hunting ground for relics such as the Library’s copy of the Proclamation which was torn from the walls of the GPO by a member of the British army. A Trinity College Professor, John Joly, also obtained a military pass to go into the streets to collect burned postal delivery dockets from the ‘still hot ruins of the GPO’, and another member of staff collected the casing of the bullet that ‘pierced the roof of the Library’.

Some Dubliners also compiled scrapbooks which enabled them to gather together their own immediate recollections and photographs, but also added items of printed ephemera, pamphlets and postcards which were issued in the subsequent days. Many also recorded the scenes of devastation using newly affordable camera technology. 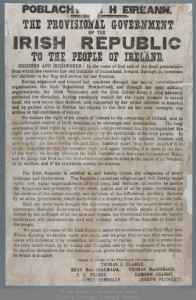 The Library’s copy of the Proclamation, said to have been torn from the walls of the GPO, along with WWI recruitment poster pasted to the back (TCD Papyrus Case 16 no.1).

Also on the occasion of the exhibition, a web archive was launched that is part of a collaboration between Trinity Library and the Bodleian Library, University of Oxford and the British Library to archive websites from both the Irish and UK web domains as they reflect on the Easter Rising 1916.

Commenting on the launch of the exhibition and the Easter Rising 1916 Web Archive, Helen Shenton, Librarian and College Archivist said: 'What is a nation without a memory of its past?  The internet has created a sea-change in knowledge sharing, but has also created new challenges. How can we ensure the vast amount of cultural content on the internet doesn’t disappear?  This web archiving project illustrates how legal deposit libraries working in collaboration can ensure this ‘at risk’ content can be captured and so survive for future generations.'

The web archive involves a collection of websites from both the Irish and UK web domains that reflect how the Easter Rising is represented on the Web in 2016. The Easter Rising 1916 Web Archive will ensure their preservation and ongoing public availability. The Bodleian Library is archiving UK websites under legislation that empowers the UK legal deposit libraries to collect and preserve digital content in addition to print publications.  As no similar legislation exists in Ireland, the Irish websites are being collected by the Library of Trinity College Dublin on a voluntary basis with the permission of website owners. The collection will be available online to the public as a special collection in the UK Web Archive and the UK websites will be held in perpetuity by the British Library in its Legal Deposit Web Archive.

Changed Utterly: recording and reflecting on the Rising 1916 –2016 is open  throughout April and the web-archive collection is also available online at http://www.webarchive.org.uk/ukwa/wall/Easter%20Rising.