Anthony Camp's article was published in the launch issue of Family Tree, back in 1984.

It's going to be a very special year for Family Tree... With the November 2014 issue Family Tree&nbsp;will be 30 years old

It's going to be a very special year for Family Tree...

With the November 2014 issue Family Tree will be 30 years old and by some margin the oldest national family history magazine published in Britain. Over this time a large number of interesting and fascinating snippets have appeared, most factual, some no doubt fictional, many sad and a great many humorous. A lot of these also illustrate just how much the world of family history has changed since 1984.

Recently, Michael Armstrong, the founder of Family Tree, has been delving into the archives, and in this series he will recall some of these treasures, many of which were sent in by our readers over the years...

In our launch issue Anthony Camp, the then Director of the Society of Genealogists wrote a piece about the society’s move on 7 July of that year from the very splendid but by then completely impractical building at South Kensington to the equally splendid and completely refurbished building at 14 Charterhouse Buildings, London EC1M 7BA .

In its 73 years of existence the society (established in 1911) had amassed some 45,000 volumes, including transcripts of almost half of the parish registers of the country, documents relating to at least 12,000 families, indexes totalling some 65 million entries and a varied collection of material on all aspects of genealogy, heraldry and topography. 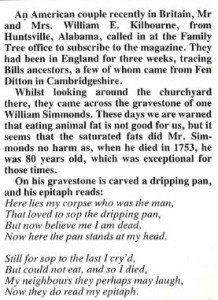 Right from the start Family Tree has been read by family historians from all over the world, adding greatly to the rich mix of family history

On page 21 of the same issue we told of an American couple Mr & Mrs William E Kilbourne from Huntsville, Alabama who called in our office to buy a subscription. They were in our area tracing the roots of Bill’s family who originated from around the Fen Ditton area in Cambridgeshire.

While looking in the churchyard there they came across the gravestone of one William Simmonds. These days we are warned that eating animal fat is not good for us, but it seems that saturated fats did Mr Simmonds no harm as, when he died in 1753, he was 80 years old, which was exceptional for those times.

On his gravestone is carved a dripping pan, and his epitaph reads:

Here lies my corpse who was a man,

That loved to sop the dripping pan,

But now believe me I am dead,

Now here the pan stands at my head.

Still to sop to the last I cry’d,

But could not eat, and so I died,

My neighbours they perhaps may laugh,

Now they do read my epitaph.

How BMD certificate issues landed someone in court!

In the March-April issue of 1985 an article sent in by reader Barbara Marlow tells us not to take all registration certificates at face value.  She wrote that a piece in the Western Morning News of 3 July 1887, told of a special petty session court held at Royton at which a man named William Fletcher who lived at Lower West Street, Oldham had been charged with forgery, uttering and putting of a medical certificate relating to the death of Mary Ann Fletcher, and causing a false entry to be made in the register of the sub-district of Chadderton. A second charge was one of obtaining two sums of eight pounds by means of fraudulent statements.

From the evidence given and from a statement made by the prisoner when charged, it would seem that around Whitsuntide, the prisoner had occasion to go to the surgery of Dr Sparrow at Oldham. From there he extracted a number of forms from a book of certificates of deaths. Several of these were filled up with the names of his family who were still living, and also his own name.

Having registered these people as dead he obtained at various times, ‘funeral money’ from several different societies.  On the 14th ultimate the prisoner presented to Mr Lord, registrar of Chadderton, a certificate of death for Mrs Mary Ann Fletcher, his mother, purporting it to have been filled in by Dr Sparrow.

He received a registrar’s certificate which he presented to the Heywood Mutual Burial Society and obtained the sum of eight pounds.

The certificate was later discovered to be a forgery, and Mr Lord gave the information to the registrar and this led to the prisoner’s apprehension. The prisoner was committed to Manchester Assizes.

Keep an eye out for future treasures from our archives, which we'll be adding to the website through 2014. And if you've got a favourite item from past issues that you'd like to be shared here too, please just email [email protected] with the details.