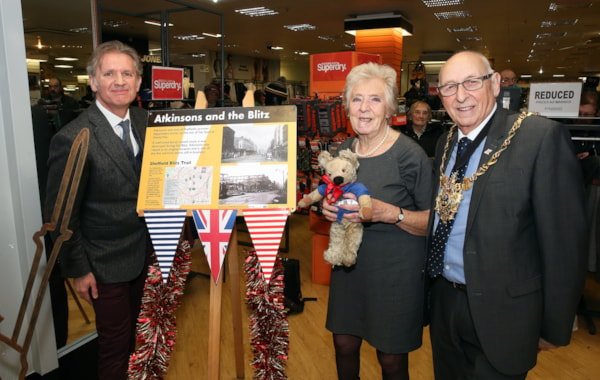 A project to create a legacy to the Sheffield Blitz has been unveiled at a city landmark that was flattened in the Luftwaffe attacks of World War II.

Department store Atkinsons, which was razed on the evening of 12/13 December 1940, has been unveiled as the gateway to the Sheffield Blitz Heritage Trail.

The Sheffield Blitz left nearly a tenth of the city’s population homeless and over 2,000 people dead or wounded. The trail brings to life the Blitz stories of 12 city sites through a combination of interpretation signboards, mobile phone app and a book.

The launch of the trail at Atkinsons was assisted by a very lucky 80-year-old teddy brought along by its owner Brenda Spencer. Nicknamed ‘Mr Teddy Dodgson', the bear was a Christmas present bought by Brenda’s dad, who rushed into Atkinsons just before it shut for the day. The cuddly toy was the last item to be sold before the store was destroyed.

Neil Anderson, author of the new book, Countdown to the Sheffield Blitz, began the legacy campaign nearly a decade ago and the project was spearheaded by heritage interpreter and guide Bill Bevan.

The trail takes walkers on a guided tour around some  of the most important Blitz sites in and around the city centre area. They include Sheffield's Central Library, which was the hub of the relief effort; Sheffield City Hall, which still bears shrapnel marks; Devonshire Green, which was the site of one of the biggest loses of life, and Bramall Lane, which was badly damaged by the bombing. The Blitz trail mobile phone app features the voice of Sheffield’s last surviving Blitz firefighter, Doug Lightning, who sadly passed away recently, and other eye witnesses to the raids.

Britain's Got Talent finalists the D Day Darlings joined the 15 December unveiling of the trail, which received backing from a plethora of famous and local people and organisations. The  project has received donations from Peter Stringfellow, Horrible Histories' creator Terry Deary, The Moor, Atkinsons and scores of individuals. It also has the backing of Sheffield City Council, The Star, Sheffield College, The National Emergency Services Museum, Sheffield United Football Club, Sheffield 50 Plus, Sheffield Galleries and Museums Trust and South Yorkshire Aircraft Museum.

Learn more about the project at https://sheffieldblitz.wordpress.com

QUICK LINK: How to research life on the Home Front in World War II.

Archive image: The remains of Atkinsons after the Blitz. The store originally opened in 1872; more information at www.atkinsonsofsheffield.co.uk

All images supplied by Neil Anderson.