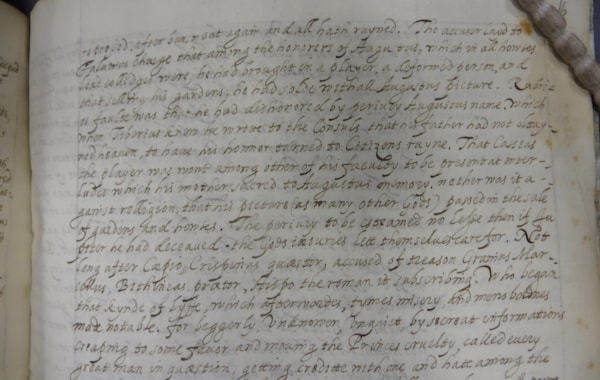 A manuscript penned by Elizabeth I has painted the 16th century monarch in a new light – thanks to her messy handwriting.

Dr John-Mark Philo, an honorary fellow in English Studies at the University of East Anglia, made the startling find while looking for manuscript translations of the Roman historian Tacitus in Lambeth Palace Library.

'Only one translator at the Tudor court... the queen herself'

Dr Philo explained: ‘The manuscript features a very specific kind of paper stock, which gained special prominence among the Elizabethan secretariat in the 1590s. There was, however, only one translator at the Tudor court to whom a translation of Tacitus was ascribed by a contemporary and who was using the same paper in her translations and private correspondence: the queen herself.

‘The corrections made to the translation are a match for Elizabeth’s late hand, which was, to put it mildly, idiosyncratic. The higher you are in the social hierarchy of Tudor England, the messier you can let your handwriting become. For the queen, comprehension is somebody else’s problem. The translation itself has been copied out in an elegant scribal hand, which is itself a match for one of Elizabeth’s secretaries, but the author’s changes and additions are in an extremely distinctive, disjointed hand – Elizabeth’s. Her late handwriting is usefully messy – there really is nothing like it – and the idiosyncratic flourishes serve as diagnostic tools.’

Clues to it being by Elizabeth

The manuscript was discovered in January 2019 but an article published on 29 November in the Review of English Studies (‘Elizabeth I’s Translation of Tacitus’) outlined other clues Dr Philo used to determine that the translation was by the queen. For instance, three watermarks featured in this manuscript (a rampant lion and the initials ‘G.B.’ with a crossbow countermark) are found in paper Elizabeth I used for other translations and correspondence. The scribal handwriting in the manuscript is also a match for a professional copyist working in the Elizabethan secretariat in the mid-1590s.

Her translation focuses on the first book of the Annales, which sees the death of Augustus and the rise of the emperor Tiberius, tracing the steady centralisation of governmental powers in a single individual.

Dr Philo said Tacitus was later ‘reviled under Charles I as anti-monarchical’, adding: ‘It is hard not to wonder what Elizabeth made of Agrippina, “who”, as Elizabeth translates it, being a woman of a great courage, “tooke upon hir some daies the office of a Captaine” and is able to rouse the troops successfully.’

He added: ‘It is not unreasonable to assume that Agrippina may have appealed to the same queen who addressed the soldiers at Tilbury, and who had deliberately represented herself as placing the importance of addressing her troops in person above her personal safety.’

It is thought the translation is an example of a leisure activity for the queen, who could speak Latin, French and Italian and was familiar with Spanish and Greek.

The manuscript is digitised and can be viewed here.